E-commerce sales revenue has increased by more than 14 times since 2000. 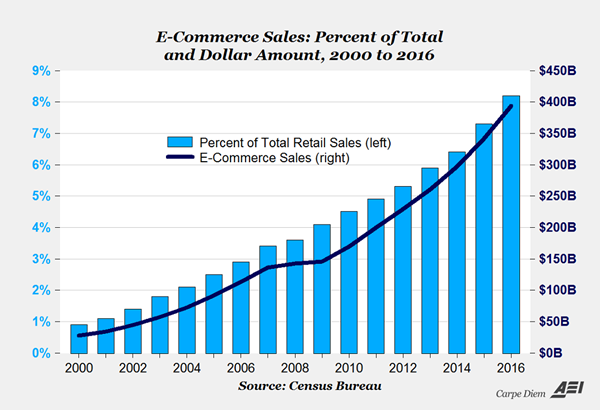 Traditional retailers have been struggling in the 21st century, and there’s been a steady stream of news highlighting those struggles. For example, J.C. Penney is closing 140 stores this spring, GameStop is closing up to 190 stores, Sears Holding will be closing 150 stores this spring including 108 Kmart and 42 Sears locations in 40 states, electronics and appliance retailer H.H. Gregg has filed for bankruptcy and is closing 88 stores and three distribution centers in 15 states, Macy’s is closing 68 stores, MC Sports is closing 68 stores, Gander Mountain is closing 32 stores, RadioShack is closing 187 stores, and Payless Shoes may file for bankruptcy and close up to 500 stores. And the list goes on…

Based on just the partial list above, store closings for that group of retailers totals to more than 1,400! That retail bloodbath has led some to pose questions like “Is 2017 the death of retail as we know it?” and “With major retailers closing, could this be the end of malls?”

Question: What is the major force behind the retail store closings even as retail sales keep increasing to all-time high levels — reaching a record high of almost $5.5 trillion last year? A shift by consumers from shopping at brick-and-mortar stores to increasingly making their retail purchases online, for greater selection and convenience, and lower prices. The chart above shows that trend graphically. From less than 1% of total retail sales in 2000, online sales accounted for more than 8% of retail sales last year (see light blue bars in the chart), and a new quarterly record high of 9.5% of sales in the fourth quarter of 2016. Measured in dollars, e-commerce retail sales have increased by more than 14 times since the Census Bureau started tracking those figures, from only $27.4 billion in 2000 to nearly $400 billion last year (see dark blue line in above chart).

Amazon’s success has also been fueled by high customer loyalty and brand awareness. The Amazon Prime subscription service continues to grow: One study released last September found that 20% of all US consumers are Prime members.

Amazon’s growth in 2016 was driven by sales in the electronics, home, and apparel categories. Electronics contributed to an estimated 18% of the company’s sales growth in 2016, as the number of US households that own an Amazon Echo device more than doubled from 2015. The next biggest contributors were the home and kitchen category (15%), apparel and accessories (12%), food (11%), and health and beauty (10%), illustrating that Amazon is seeing significant growth in consumer packaged goods (CPGs). The company’s recent expansion of its Dash Buttons to its online site and mobile app should help fuel further growth in these categories.

And here’s the key takeaway from Business Insider:

E-commerce will truly become the future of retail, as nearly all of the growth in the retail sector now takes place in the digital space.

And that means we will continue to see more creative destruction in the retail sector from Hurricane Joseph Schumpeter as brick-and-mortar retailers continue to close, probably along with many of the malls where those retailers were once located. When an Amazon Prime membership now offers you 2-hour, same day or next day free delivery for millions of items at extremely competitive prices, the combination of selection, price, and convenience from Amazon makes it irresistibly attractive to most of us consumers, and we get addicted to it like “retail crack cocaine”! Additionally, an Amazon Prime membership for $99 per year now offers not just free unlimited delivery, but also includes Prime Music (for streaming two million songs) and Amazon Video (for streaming movies and TV shows), so you can see why 20% of consumers are now Prime members. And you can understand why millions of consumers are shopping online through Amazon instead of patronizing traditional retailers.

Question: How is Amazon’s dominance as the top online retailer and the top creator of retail consumer value being reflected in the stock market? The graphic below (thanks to Olivier Ballou for his help) displays a visual comparison of Amazon’s market capitalization earlier this week ($405 billion on Monday, it’s since increased to $417.4 billion as of early this afternoon) compared to the combined valuation of five of the top traditional retailers: Walmart ($214 billion, just a little more than half of Amazon’s value), Target ($29.5 billion), Costco ($73 billion), CVS ($80.5 billion) and Best Buy ($14.3 billion). Combined, the total market capitalization of those five retailers is $411 billion, just slightly more than the value of Amazon by itself. (The current market valuations of some of the companies mentioned above that are publicly traded are: J.C. Penney ($2 billion), Macy’s ($9 billion), Sears Holding ($1.2 billion) and GameStop ($2.3 billion)).

Bottom Line: Although there are certainly other financial measures that could be considered (sales, enterprise value, return on equity, etc.), it’s clearly the case that the significant value Amazon is creating for its millions of customers is being reflected in its stock price (average annual appreciation of 35.1% over the last five years, 30.5% average return over the last 10 years) and huge market capitalization of more than $400 billion. 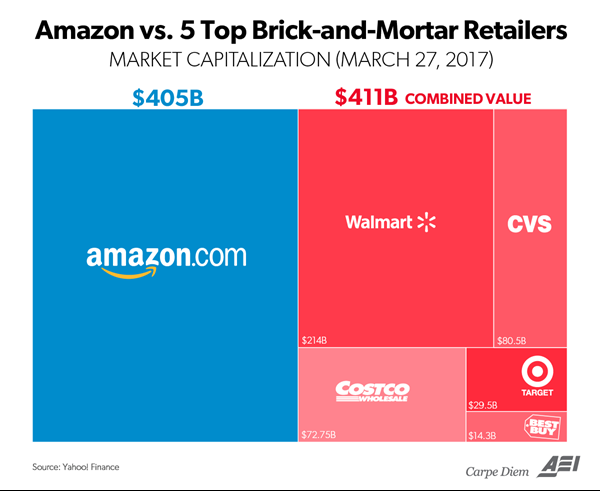