If having the highest taxes were a competition, Chicago would be a clear winner.

In 2013, Forbes Magazine named Chicago the fourth most miserable city in the US. Coincidence? Maybe not.

According to a new report from Truth in Accounting, residents of the Windy City are the most heavily taxed in nation, and it’s not a close contest. Below is a breakdown of the 10 US cities with the largest per capita taxpayer burden.

Most statistics don’t include underlying expenses not included in official reports. Taxpayers are responsible for paying for debts incurred by the government for schools, transit agencies, housing administrations, and more.

When all factors are accounted for, Chicago’s citizens actually carry a heavier burden than the people of New York City. And not just by a few pennies here or there, but by over $30,000 per taxpayer! As Lori Lightfoot, the recently elected mayor of Chicago, explained, "We live in one of the most taxed cities and the most taxed county, unfortunately, in the country."

According to Chris Lentino of the Office of Illinois Policy,

In a comparative analysis of taxes and fees in the nation's top 15 cities, Chicago won first place more times than any other city. After analyzing 24 different taxes and fees—from those on cellphones, cigarettes, ridesharing and more—Chicago is leaps and bounds ahead of its competitors, with 10 No. 1 rankings. 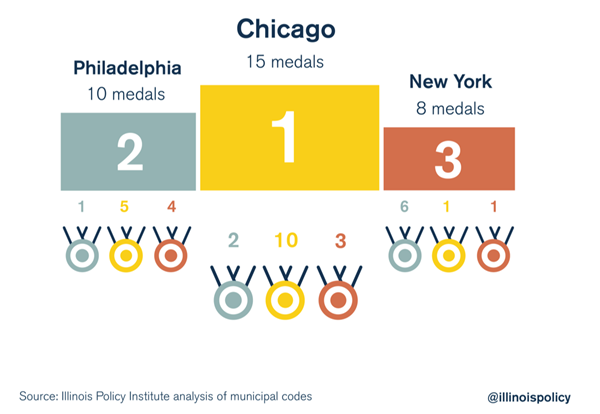 If having the highest taxes were a competition, Chicago would be a clear winner. When a city takes its citizens money it is saying “we know how to spend your money better than you do.”

In reality, each individual is in the best position to choose how they would like to exchange their money for various goods and services. Taxes serve many different purposes, some more noble than others, but it’s abundantly clear that spending is pretty much out of control when citizens are taxed $119,110 on average in order to balance your budget.