What We Can Learn from Romania’s Internet

What do you think of when someone mentions Romania? Many of us probably imagine old castles and quaint Gypsy villages. Or perhaps we think of the days of Nicolae Ceausescu’s dictatorship under Soviet support. We might be surprised to learn that today it’s one of the most economically advanced and freest countries in Eastern Europe. It’s noteworthy for having some of the fastest Internet service in the world, a fact that socialist presidential candidate Bernie Sanders has called attention to on Twitter:

“Today, people living in Bucharest, Romania have access to much faster Internet than most of the US. That’s unacceptable and must change.” 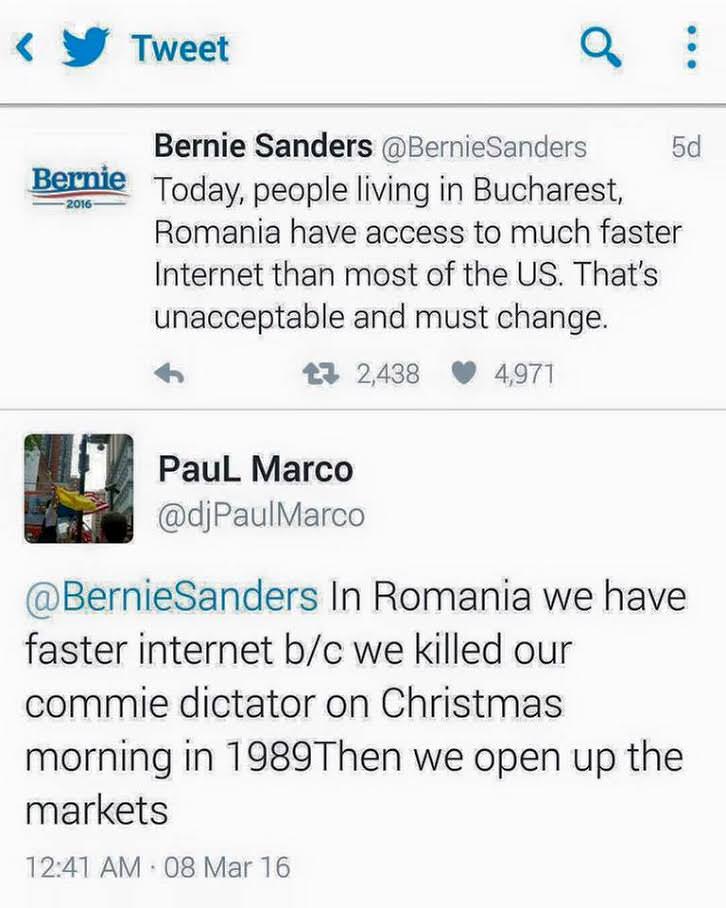 Bucharest is among the world’s top cities for Internet speed, though it’s only the third fastest in Romania and is outranked by Kansas City. Why that upsets Sanders so much isn’t clear. Perhaps he shares the Dracula’s Castle stereotype of the country and thinks it outrageous that Americans can’t do better. Perhaps he’s jealous and thinks Romania ought to slow down. Or perhaps he thinks Bucharest achieved its high speeds through central planning and the US should emulate it.

If he’s looking to Romania for a model to follow, that’s a good idea, but the model isn’t central planning. It’s quite the opposite.

Comparing different countries requires caution, and comparing city averages to national averages is dubious. Romania’s population density is over twice that of the United States, making it easier to bring high-speed service to people, and in both countries, the fastest speeds are found in cities. However, Romania’s history of Internet development has an advantage over America’s. Entering the cable or telephone market in the United States requires meeting expensive and difficult local franchise requirements, and most people have, at most, a choice between a phone monopoly and a cable monopoly for broadband access. In Romania, many people have another option that comes with little regulation: a locally run network that connects to one of the major services.

Kaleigh Rogers, a staff writer for Motherboard, explains in an article titled “Why Romania’s Internet Is So Much Faster Than America’s”:

When the demand for high speed internet started to grow in Romania, Romtelecom (Romania’s AT&T) hadn’t yet launched. To meet the need, savvy entrepreneurs started to launch neighborhood networks: small, localized operations that only serve a customer base of a few blocks.

At first, these were just local area networks so neighbors could share music they’d downloaded or play games together. The local network operators started to make more money as more people joined the network, so they decided to use the LANs as a convenient way to sell inexpensive high-speed internet to a specific area, installing overhead internet cables.

“There are now discussions about forcing these operators to put their networks underground, which would have the benefit of removing the fibres from view in many urban areas,” reads a case stu​dy from the ITU [International Telecommunications Union]. “However, to date operators have not been forced to put their networks underground on a large scale and Romanians therefore enjoy access to relatively cheap broadband infrastructure in many urban areas.”

As regards the infrastructure used, the Romanian broadband market is characterised by platform based competition. As far as the market structure is concerned, 1,010 operators provide fixed broadband internet access, of which 41 by cable network, 210 by fibre, 215 by radio, 17 by xDSL, 861 by UTP/FTP cable.

UTP is “unshielded twisted pair,” a simple two-wire cable, and FTP adds a foil shield. These are presumably what the small local providers use. As techie Vali Petcu explains,

Internet in Romania is generally found in the cities, where it’s easy to put a router in a box and then spread UTP cable to a whole street or a whole block. And I know this because I have done this and almost all the internet in Romania was like this 5 years ago: UTP cables everywhere. Fiber optics cable on poles.

If Sanders is looking to Romania for a model to follow, that’s a good idea, but the model isn’t central planning. It’s quite the opposite.

In most parts of the United States, local authorities deem stringing wires among buildings unsightly, so network builders have to bury the cables, increasing their costs.

Fierce competition led to aggressive innovation and a race to slash prices and improve quality. The government took a long time to realize the pace of these developments, and was slow in hampering the growth of what we can assume is still the freest sector of the Romanian economy.

The most optimistic, though unlikely, interpretation of Senator Sanders’s comment is that he’s coming to recognize that when start-up businesses face few regulatory barriers, they can accomplish a lot. Romanians are evidently proud of their Internet; the travel agency Paravion invited him to visit the country at its expense so he can experience it firsthand. Whatever he had in mind, he’s called attention to the country’s example, which is worth following.