Alexandria Ocasio-Cortez Is Wrong about the Upper Middle Class

It's not vanishing. In fact, it's larger and wealthier than ever.

My best guess is that Ocasio-Cortez’s comments suggest a belief in a hyperpolarized, “1 percent vs. 99 percent” modern America. There’s only the rich getting richer and then everybody else. But that doesn’t appear to be an accurate description of what has been happening with incomes. (For more on Ocasio-Cortez’s thinking, check out “The uninformed economic views of Alexandria Ocasio-Cortez, in 2 charts.”) As this 2016 story in The Wall Street Journal explained,

A range of data after the recession and the housing bust supported the idea that only a tiny elite of U.S. society, generally seen as the top 1%, had rebounded and was doing well. But a growing body of evidence suggests the economic expansion since the 2007-09 financial crisis has enriched a much larger swath of the upper middle class, and that a deeper income divide is developing between that top quarter or so of the population and everyone else. The latest piece of evidence comes from economist Stephen Rose of the Urban Institute, who finds in new research that the upper middle class in the U.S. is larger and richer than it’s ever been. He finds the upper middle class has expanded from about 12% of the population in 1979 to a new record of nearly 30% as of 2014. 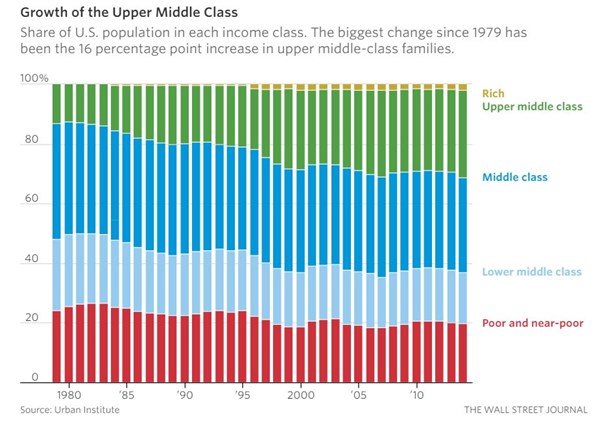 Top Dems might be stuck in the Clinton era, but Ocasio-Cortez seems stuck at a 2010 Occupy Wall Street rally. The 1 percent is yesterday’s enemy. Now the bulls-eye is on the top 20 percent, the rich and the upper middle class. They are the “dream hoarders,” the favored fifth who hog the American Dream by tilting the nation’s politics and economy to their advantage.

But it’s important to note that the lower and “middle” middle-class decline is apparently because of more families qualifying for the upper middle class through higher incomes. And if you are worried that the upper middle class is using its size and economic power to make America worse, then it’s time to think about policy fixes such as reforming zoning laws and occupational licensing rules. (Another would be curtailing the deductions on mortgage interest. Oh, I forgot, that’s already happening thanks to the new tax law.) Not sure if any of those items are on the agenda of Alexandria Ocasio-Cortez, who has been called the “future of the Democratic Party.”