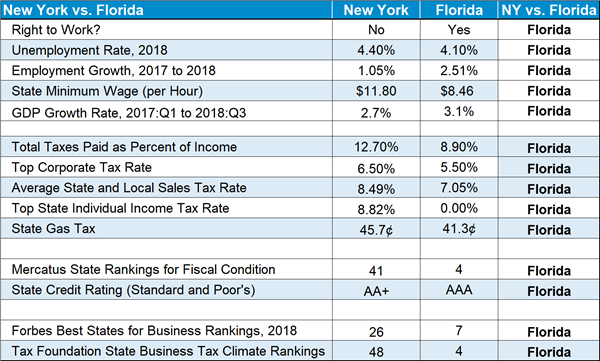 When I ran for governor in 2010, I evaluated Florida as a turnaround opportunity. It had great assets—and, more important, great people—but was suffering from mismanagement and a lack of leadership. The naysayers said a businessman can’t make government work. They were wrong. My administration cut more than $10 billion in taxes and more than 5,000 burdensome regulations. Florida businesses created nearly 1.7 million new jobs. We paid off more than one-third of our state debt over my eight years as governor while we made record investments in education, transportation and the environment.

I made more than 20 trips to high-tax states like California, Connecticut, Illinois, New York and Pennsylvania to lure businesses to Florida. The tax-happy leaders of those states were furious, which made the visits all the more enjoyable for me. They called me every name in the book. But they were the ones who raised taxes, and bad decisions have consequences.

The elites in New York and Washington should commission a study of Florida to see what happens when conservative ideas are put into practice. The luxury real-estate market in Manhattan may be sagging, but Florida’s economy is thriving, expanding at a record pace.

Actually, the table above displays 14 different reasons why individuals and companies are leaving New York for Florida. On a variety of more than a dozen measures of economic growth, business friendliness, labor market vitality, tax burdens, and state fiscal conditions, Florida comes out ahead of New York on every single measure. In other words, Florida 14, New York 0.

There is empirical evidence that Americans and businesses do “vote with their feet” when they relocate from one state to another, and the evidence suggests that Americans are moving from states that are more economically stagnant, fiscally unhealthy states with higher tax burdens and unfriendly business climates with fewer economic and job opportunities, to fiscally sound states that are more economically vibrant, dynamic and business-friendly, with lower tax and regulatory burdens and more economic and job opportunities.