"Zero-emission" vehicles are only as clean as the power source they plug into.

A new report by economist Jonathan Lesser of the Manhattan Institute challenges the conventional wisdom that zero-emission vehicles (ZEVs) are superior to new internal combustion vehicles (ICVs) on environmental grounds. Lesser also has an op-ed in Politico today based on the study.

Lesser’s analysis is detailed and quantitative, but the basic idea is simple: Zero-emission vehicles are only as clean as the electric power sources they plug into. Given the electricity fuel mix reasonably projected by the Energy Information Administration between now and 2050, both nitrogen oxide and sulfur dioxide emissions from the power plants supplying zero-emission vehicles will exceed the emissions from new internal combustion vehicles. 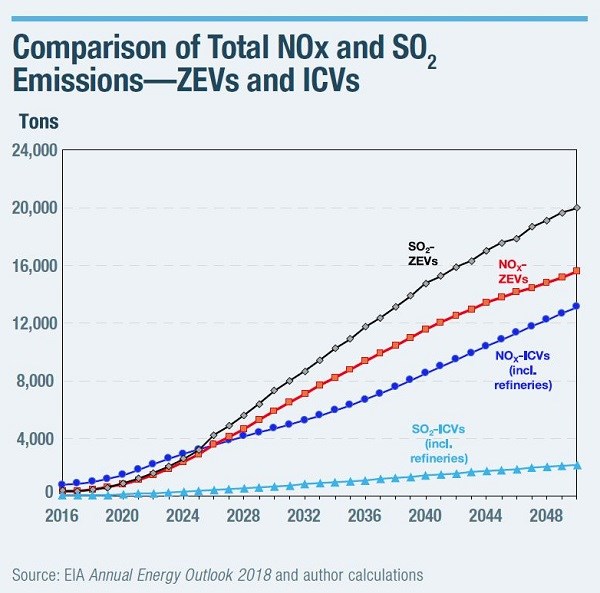 The study also finds that the carbon dioxide emission reductions achieved by zero-emission vehicles, even if all are powered by renewable sources, would be too small to detectably affect global temperatures and thus have no measurable economic value. (See "Air Pollution Regulation Isn’t the Answer" for more.)

In contrast, the costs of federal and state subsidies for zero-emission vehicles and associated infrastructure are both real and substantial. “In California alone, the total cost of ZEV subsidies, including federal tax credits and state rebates for ZEV purchases, as well as subsidies for private and public charging infrastructure, is likely to exceed $100 billion,” Lesser writes in his study. Such policies also raise serious equity concerns, because the subsidies transfer wealth from lower- and middle-income households to wealthier households.

From the study’s conclusion:

The newest ZEVs are impressive technologically. But there is no economic basis for the billions of dollars spent subsidizing their adoption. The entire premise for subsidizing ZEVs and the infrastructure needed to power them—reduced air pollution and lower CO2 emissions—is flawed.

The simple fact is that, because of stringent emissions standards and low-sulfur gasoline, new ICVs today emit very little pollution, and they will emit even less in the future. Compared with new ICVs, ZEVs charged with the forecast mix of electric generation will emit more criteria air pollutants—SO2, NOx, and particulates—not less. And although ZEVs will emit less CO2 than ICVs, the projected reduction in CO2 emissions, below 1 percent of total forecast U.S. CO2 emissions, will have no measurable impact on climate and, hence, no economic value.

The bottom line is that the economic and environmental rationales for subsidizing ZEVs do not withstand scrutiny. These subsidies, along with mandates for ZEV adoption, should be eliminated.