Since the 1920s, atmospheric CO2 concentrations increased from about 305 parts per million to more to more than 400 ppm.

The latest talking point of progressive politicians, pundits, and activists is that America cannot afford not to spend trillions of dollars to “solve the climate crisis” because global warming is an existential threat. As Sen. Bernie Sanders (I-VT) put it, “You cannot go too far on the issue of climate change. The future of the planet is at stake, OK?”

That is sham wisdom even if climate change were the terror Sen. Sanders imagines it to be. The resources available to public and private decision makers are finite. Resources allocated to “climate action” are no longer available to make mortgage payments, pay college tuitions, grow food, fund medical innovation, or build battleships. Prudent policymakers therefore not only consider the costs of policy proposals but also compare the different benefit-cost ratios of competing expenditures. As it happens, the benefit-cost ratios of carbon suppression policies are abysmal.

For example, just the direct expense of the electric sector portion of the Green New Deal would, conservatively estimated, cost $490.5 billion per year, or $3,845 per year per household, according to American Enterprise Institute economist Benjamin Zycher. Yet even complete elimination of U.S. greenhouse gas emissions would avert only 0.083°C to 0.173°C of global warming 70 years from now—a policy impact too small to discernibly affect weather patterns, crop yields, polar bear populations, or any other environmental condition people care about.

The climate “benefit” over the next 10 years would be even more minuscule. Yet during that period, Zycher estimates, the annual economic cost of the GND electric sector program would be about $9 trillion. It is unwise to spend so much to achieve so little.

The doomsday interpretation of climate change is a political doctrine, not a scientific finding, as Danish economist Bjorn Lomborg shows in a recent series of tweets and University of Alabama in Huntsville atmospheric scientist John Christy explains in a new paper titled “Falsifying Climate Alarm.”

Nobel economist Stiglitz tells us we need to suffer through hardship equal to World War III to fight climate change
His economic arguments for accepting policy costs of $100+ trillion are unfocused and wrong
Climate seems to eradicate any common sensehttps://t.co/kuVJDlYMjH

In the aforementioned tweets, Lomborg rebuts an op-ed by Nobel economist Joseph Stiglitz, who advocates spending trillions of dollars annually to combat climate change, which he calls “our World War III.” As evidence, Stiglitz claims that in recent years weather-related damages cost the U.S. economy 2 percent of GDP—a figure for which he gives no reference.

Lomborg deftly sets the record straight. Aon Benfield reinsurers estimate that during 2000-2017, weather-related damages cost the United States about $88 billion annually, or 0.48 percent of GDP per year, not 2 percent. More importantly, extreme weather is a natural feature of the Earth’s climate system. The vast majority of those damages would have occurred with or without climate change. “Does Stiglitz believe there is no bad weather without climate change?” Lomborg asks. 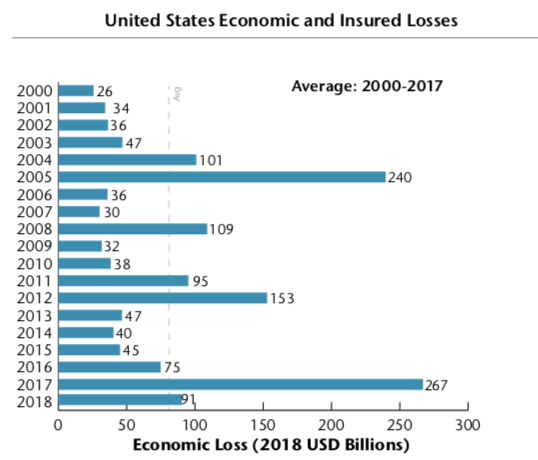 In the United States, hurricanes are the biggest cause of weather-related damages. Hurricanes have become more costly over the past 120 years but not because of any long-term change in the weather. Once historic losses are adjusted for increases in population, wealth, and the consumer price index, U.S. hurricane-related damages show no trend since 1900. 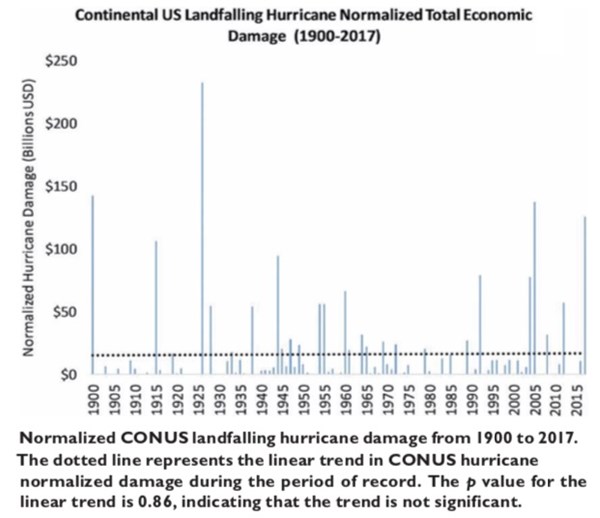 The past three decades are generally agreed to be the warmest in the instrumental record. Yet during that period, damages due to all forms of extreme weather as a share of global GDP declined. In other words, despite there being many more people and lots more stuff in harm’s way, the relative economic impact of extreme weather is decreasing. It is difficult to reconcile that trend with claims that ours is an “unsustainable” civilization.

Lomborg provides an even more telling rebuttal point in a previous Tweet. Since the 1920s, atmospheric carbon dioxide (CO2) concentrations increased from about 305 parts per million to more than 400 ppm, and global average temperatures increased by about 1°C. Yet globally, the individual risk of dying from weather-related disasters declined by 99 percent. 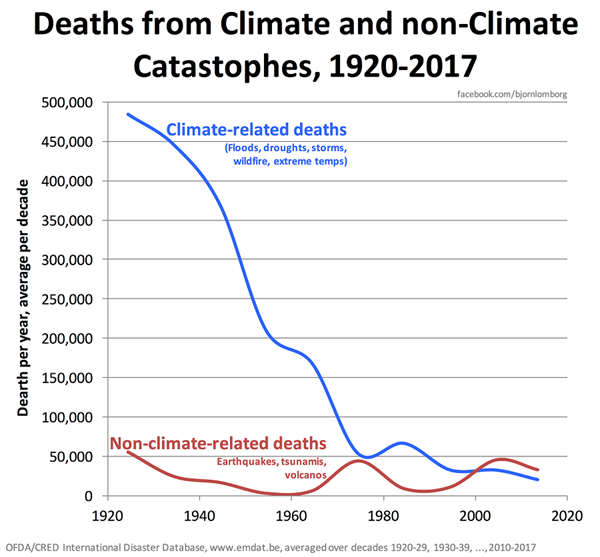 Stiglitz claims we cannot afford not to spend trillions to mitigate climate change because “our lives and our civilization as we know it is at stake, just as they were in World War II.” Lomborg notes that in the peer-reviewed literature, unchecked climate change is estimated to cost 2-4 percent of global GDP in 2100. That “is not the end of the world,” especially considering that, despite climate change, global per capita incomes in 2100 are expected to be 5-10 times larger than today.

Ironically, in the “socio-economic pathways” (SSPs) literature, the richest SSP is the one that relies most on free markets and fossil fuels. 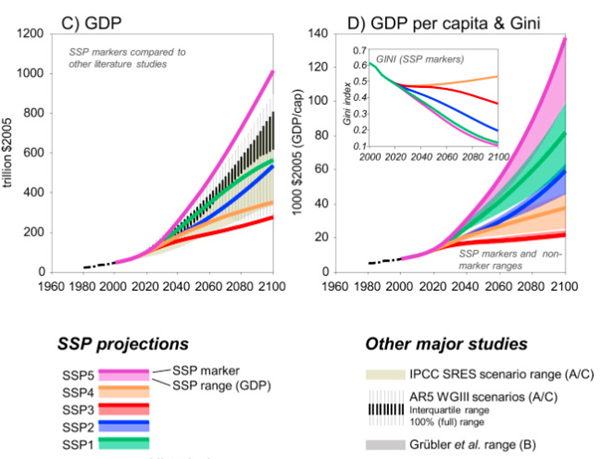 Source: Keywan Rhiahi et al. 2017. “This world [SSP5] places increasing faith in competitive markets, innovation and participatory societies to produce rapid technological progress and development of human capital as the path to sustainable development. . . . At the same time, the push for economic and social development is coupled with the exploitation of abundant fossil fuel resources and the adoption of resource and energy intensive lifestyles around the world.” 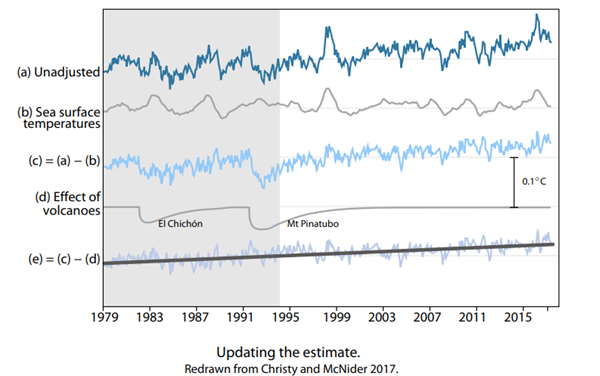 This is not a very alarming number. If we perform the same calculation on the climate models, you get a figure of 2.31°C, which is significantly different. The models’ response to carbon dioxide is twice what we see in the real world. So the evidence indicates the consensus range for climate sensitivity is incorrect.

In 2018, Christy and economist Ross McKitrick set out to test the accuracy of climate models. They examined model projections in the atmosphere between 30,000 and 40,000 feet, in the tropics from 20°N to 20°S. The atmosphere warms fastest in that portion of the atmosphere in almost all models used by the U.N. Intergovernmental Panel on Climate Change (IPCC), such as the Canadian Climate Centre model, shown below. 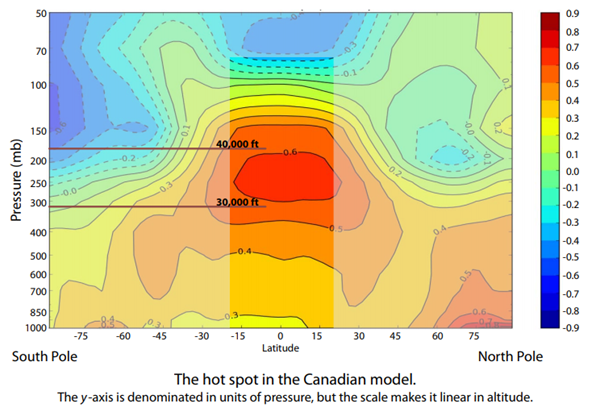 In 102 model runs, the average warming in the “hot spot” portion of the tropical atmosphere is 0.44°C per decade, or 2°C during 1979-2017. “However, the real-world warming is much lower; around one-third of the model average,” Christy reports. 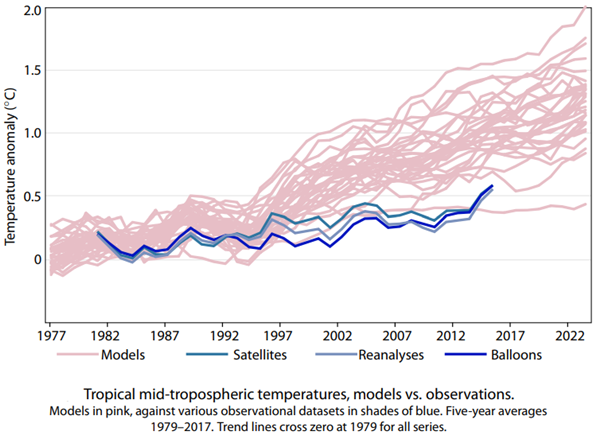 Christy sums up the test results:

You can also easily see the difference in warming rates: the models are warming too fast. The exception is the Russian model, which has much lower sensitivity to carbon dioxide, and therefore gives projections for the end of the century that are far from alarming. The rest of them are already falsified, and their predictions for 2100 can’t be trusted. If an engineer built an airplane and said it could fly 600 miles and the thing ran out of fuel at 200 and crashed, he wouldn’t say ‘Hey, I was only off by a factor of three’. We don’t do that in engineering and real science. A factor of three is huge in the energy balance system. Yet that’s what we see in the climate models.

Statements like the following are increasingly common in popular media, academic journals, and political discourse: “The evidence that anthropogenic climate change is an existential threat to our way of life is incontrovertible.” Not so—not even close.

This CEI article was republished with permission.