Your New Mailman Works for Amazon

Forgive the term but capitalism is working, despite its poor reputation.

There he was dropping off packages in the mail room. I picked up mine and walked away. Then I did a double take. The patch on his shoulder was not USPS, FedEx, or UPS. It was the familiar lower case “a” of Amazon.

“Wait, do you actually work for Amazon?”

“The company that sells things online now has its own warehouse-to-doorstep delivery service?”

“Yes, it’s been around for a year, but expanding by the day. I love my job. It’s a great company.”

I am pretty sure I knew this, but it was only a news story until this moment. There is something about seeing it in real time, and meeting the person who is actually doing it, that makes the reality especially prescient.

So Much for Monopoly

Despite the naysayers across the political spectrum, Amazon pressed on.  We should take time to appreciate what this means. For many decades, the government monopolized mail, crushing competitors at every turn. It goes back to the 19th century. When the US government cracked down on private mail services in 1834, two thirds of existing services were private. Criminal penalties were imposed and they all gradually went away.

The rise of FedEx and UPS crawled through a loophole in the law. The government maintained its monopoly on first-class mail, but permitted exceptions for packages and special deliveries. Then came email. Once the monopoly was shattered, the government’s protected sector became nearly worthless, as we all know. People under the age of 30 hardly even go to their mailboxes anymore.

Think about it: the government’s long-held control over mail was shattered not through reform or privatization but by technology, entrepreneurship, and the forward motion of history itself.

But the entry of Amazon into the delivery space is just incredible. It's not just last mile. It will expand and expand.

Even I recall Amazon’s first web page, which appeared in 1994. Debunkers were everywhere. This internet thing will never be commercially viable, people said.

So Much for Bubbles

Despite the naysayers across the political spectrum, Amazon pressed on. Its stock price on December 10, 1999, was $106. Then the crash happened. By the following autumn, the price had collapsed to $7. For a whole generation of skeptics, this, combined with a massive price decline across the sector, was proof that this Internet stuff was a huge bubble that could never amount to anything. Better to cling to real, time-tested, historically proven stuff, and avoid all these newfangled things.

And yet, some people still believed in the technology itself, and thank goodness. Amazon went on to change the way we shop and live. Amazon leveraged itself up and out, harder and harder, based on faith and conviction. By 2004, the stock price began its systematic rise. Today the price has reached an all-time high above $1,000.

You can look at the price chart and see that it moved straight up. 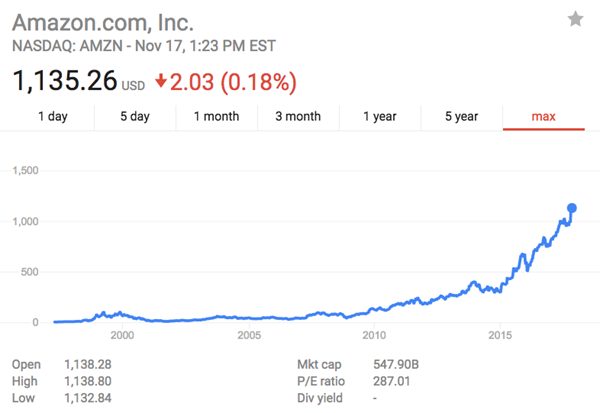 What this chart masks is the huge human drama that occurred the entire time. If you had asked any institutional investor in the year 2001 what he or she thought about Amazon, the answer would have come quickly: this is a dog. And yet those with faith in technology saw a brilliant future and bet on it. They were the winners.

Was there a bubble in tech stocks in 1999? Depends on what you call a bubble. Were the high prices somehow wrong and the low prices correct? Perhaps the opposite is true. The high prices imagined a future that had not yet arrived. The low prices were an expression of a lack of faith in the future. The false signal was the bust not the boom. (Are you listening Bitcoin debunkers?)

Those who were not traumatized by the collapse proved to be the correct ones.

Today, Amazon is a job machine. You can go to Flex.amazon.com and get a job delivering packages, doing exactly what the government has been trying to prevent since 1834.

Forgive the term but capitalism is working. Already, we are seeing new innovations take place. Consider Amazon Key. It is a smart lock and camera that you install on your home that is specifically designed to let an Amazon delivery be placed safely inside your home.

All this competition is making everyone better off, and bringing new levels of consumer service to the market. CVS has announced that it is offering prescription delivery services just on the rumor that Amazon will enter the market. And the package delivery service will keep price pressure on everyone else.

The real drama of our times is embedded inside these seemingly small improvements in how we live, all being delivered by private enterprise. Forgive the term but capitalism is working, despite its poor reputation. It’s not the political parties that are doing this. It’s not the bureaucracies. It’s not even the Ivory Tower. The world is being made more beautiful by the profit-and-loss system that is working to serve you and me every day.