You'd think that a publication called "The Economist" would know better than to push thoroughly debunked Keynesian nonsense.

When I was younger, folks in the policy community joked that BusinessWeek was the “anti-business business weekly” because its coverage of the economy was just as stale and predictably left wing as what you would find in the pages of Time or Newsweek.

Well, perhaps it’s time for The Economist to be known as the “anti-economics economic weekly.”

Writing about the stagnation that is infecting western nations, the magazine beclowns itself by regurgitating stale 1960s-style Keynesianism. The article is worthy of a fisking (i.e., a “point-by-point debunking of lies and/or idiocies”), starting with the assertion that central banks saved the world at the end of last decade.

During the financial crisis the Federal Reserve and other central banks were hailed for their actions: by slashing rates and printing money to buy bonds, they stopped a shock from becoming a depression.

I’m certainly open to the argument that the downturn would have been far worse if the banking system hadn’t been recapitalized (even if it should have happened using the “FDIC-resolution approach” rather than via corrupt bailouts), but that’s a completely separate issue from whether Keynesian monetary policy was either desirable or successful.

Regarding the latter question, just look around the world. The Fed has followed an easy-money policy. Has that resulted in a robust recovery for America? The European Central Bank (ECB) has followed the same policy. Has that worked? And the Bank of Japan (BoJ) has done the same thing. Does anyone view Japan’s economy as a success?

At least the article acknowledges that there are some skeptics of the current approach.

The central bankers say that ultra-loose monetary policy remains essential to prop up still-weak economies and hit their inflation targets. …But a growing chorus of critics frets about the effects of the low-rate world—a topsy-turvy place where savers are charged a fee, where the yields on a large fraction of rich-world government debt come with a minus sign, and where central banks matter more than markets in deciding how capital is allocated.

The Economist, as you might expect, expresses sympathy for the position of the central bankers.

In most of the rich world inflation is below the official target. Indeed, in some ways central banks have not been bold enough. Only now, for example, has the BoJ explicitly pledged to overshoot its 2% inflation target. The Fed still seems anxious to push up rates as soon as it can. 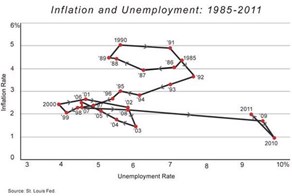 But real-world evidence apparently can be ignored if it contradicts the left’s favorite theories.

That being said, we can set aside the issue of Keynesian monetary policy because the main thrust of the article is an embrace of Keynesian fiscal policy.

…it is time to move beyond a reliance on central banks. …economies need succour now. The most urgent priority is to enlist fiscal policy. The main tool for fighting recessions has to shift from central banks to governments. 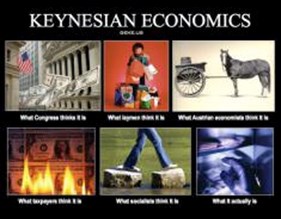 As an aside, the passage about shifting recession fighting “from central banks to governments” is rather bizarre since the Fed, the ECB, and the BoJ are all government entities. Either the reporter or the editor should have rewritten that sentence so that it concluded with “shift from central banks to fiscal policy” or something like that.

In any event, The Economist has a strange perspective on this issue. It wants Keynesian fiscal policy, yet it worries about politicians using that approach to permanently expand government. And it is not impressed by the fixation on “shovel-ready” infrastructure spending.

The task today is to find a form of fiscal policy that can revive the economy in the bad times without entrenching government in the good. …infrastructure spending is not the best way to prop up weak demand. …fiscal policy must mimic the best features of modern-day monetary policy, whereby independent central banks can act immediately to loosen or tighten as circumstances require.

So The Economist endorses what it refers to as “small-government Keynesianism,” though that’s simply its way of saying that additional spending increases (and gimmicky tax cuts) should occur automatically.

…there are ways to make fiscal policy less politicised and more responsive. …more automaticity is needed, binding some spending to changes in the economic cycle. The duration and generosity of unemployment benefits could be linked to the overall joblessness rate in the economy, for example. 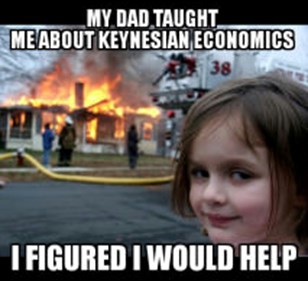 In the language of Keynesians, such policies are known as “automatic stabilizers,” and there already are lots of so-called means-tested programs that operate this way. When people lose their jobs, government spending on unemployment benefits automatically increases. During a weak economy, there also are automatic spending increases for programs such as Food Stamps and Medicaid.

I guess The Economist simply wants more programs that work this way, or perhaps bigger handouts for existing programs. And the magazine views this approach as “small-government Keynesianism” because the spending increases theoretically evaporate as the economy starts growing and fewer people are automatically entitled to receive benefits from the various programs.

A Claim With No Evidence

Regardless, whoever wrote the article seems convinced that such programs help boost the economy.

When the next downturn comes, this kind of fiscal ammunition will be desperately needed. Only a small share of public spending needs to be affected for fiscal policy to be an effective recession-fighting weapon. 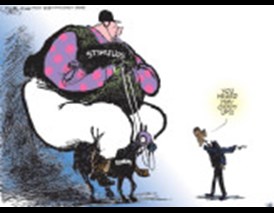 Indeed, Keynesian spending has an unparalleled track record of failure in the real world. Though advocates of Keynesianism have a ready-built excuse. All the above failures only occurred because the spending increases were inadequate.

But what do you expect from the “perpetual motion machine” of Keynesian economics, a theory that is only successful if you assume it is successful?

I’m not surprised that politicians gravitate to this idea. After all, it tells them that their vice of wasteful overspending is actually a virtue.

But it’s quite disappointing that journalists at an allegedly economics-oriented magazine blithely accept this strange theory. 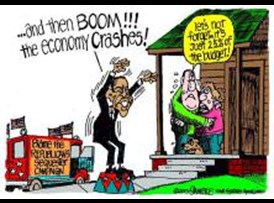 P.S. My second-favorite story about Keynesian economics involves the sequester, which big spenders claimed would cripple the economy, yet that’s when we got the only semi-decent growth of the Obama era.

P.P.S. My favorite story about Keynesianism is when Paul Krugman was caught trying to blame a 2008 recession in Estonia on spending cuts that occurred in 2009.

A version of this article first appeared on Dan Mitchell's blog.