With OpenBazaar, Everyone Can Be a Retailer, Without Permission

What if every person in the world, regardless of social status, language, or nationality, could open a retail store available to everyone, asking no one’s permission? What if no one could stand in that person’s way?

OpenBazaar, like the Bitcoin hydra itself, takes every advantage of the borderlessness and spontaneous order of digital spaces.It wasn’t possible 12 months ago, but it is today.

What if this store could deliver goods and services while accepting payment from anyone in the world, using no bank, conventional payment system, or financial intermediary?

It wasn’t possible before the invention of cryptocurrency, but it is today.

And what if this store was so decentralized that no government in the world could take it down?

No one could imagine such a thing a decade and a half ago, but it is a reality today.

The technology that makes it possible is not a website but rather an application that anyone can download and run. It has just come out of Beta and is already in use by many thousands of people around the world.

So far as I know, the Foundation for Economic Education is the first major nonprofit organization to use the new technology.

It is called OpenBazaar.org. To see the FEE store, go to @FEEstore.

Anyone can download the application, shop, and make a store, with no fees and no further plugins or fuss. The payment system is the international digital currency Bitcoin, which depends not on the value or status of any national monetary system. The Openbazaar platform itself, just like Bitcoin, has no central point of failure, so it cannot be hunted down and destroyed by governments.

The platform operates peer-to-peer with no permission necessary from any third party. 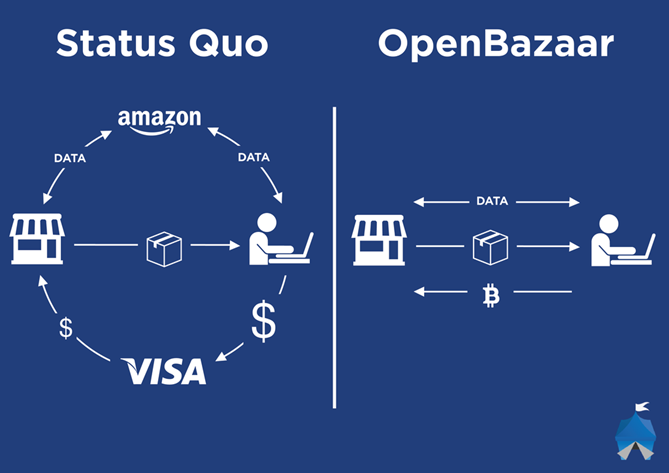 How can buyer and seller be sure that each has fulfilled the terms of their contract? How does it prevent sellers and buyers from running away with each other’s property? The platform uses another innovation that only came into its own a few years ago: multisig.

If you both agree to a price, the client creates a contract between you both with your digital signatures, and sends it to a third party called a moderator. These moderators are also folks on the OpenBazaar network—could be your neighbor or someone across the world—who the buyer and seller trust in case something goes wrong. The third party witnesses the contract and creates a multisignature Bitcoin account (multisig) that requires two of three people to agree before the Bitcoin can be released.

The buyer then sends the agreed upon amount to the multisig address. You get a notification saying the buyer has sent the funds, and you ship the laptop to them and mark that it has been shipped. The buyer receives it a few days later, and they mark it received, which releases the funds from multisig to you. You got your Bitcoin, the buyer got the laptop; no fees paid, no one stopped your trade, everyone’s happy.

To make such an invention possible, there had to be Bitcoin in the first place, which itself appeared in 2009, in response to the crying need for an Internet currency that lives outside the borders of the nation state and is not controlled by any central bank. The invention of Bitcoin itself relied on innovations in distributed networks, cryptography, and cloud-based ledgers to keep track of who owns what.

With the appearance of OpenBazaar we can observe the next brick in place for a globally open commercial infrastructure, scalable to the whole of the human population and functioning outside any existing legal structure of any nation-state. It is a tremendous tribute to human ingenuity and a bullish sign for the prospects of human liberty itself.

And yet every innovation depends on many previous innovations, which is why no one should forget what actually gave rise to this achievement. It was the infamous Silk Road (February 2001-October 2014), the first and most famous self-regulating digital free market to accept Bitcoin. It was shut down because it became a choice venue for the distribution of products such as marijuana that is now legal in many places. For being ahead of his time, the founder and creator Ross Ulbricht has been sentenced to 2 lifetimes in prison.

Ross’s retail innovation inspired many to see some extraordinary potential here. Where the Silk Road went wrong was being too centralized. Once the FBI found the administrator, the bureaucrats snagged him with the admin window open and thereby gained access to all data.

That cannot happen to OpenBazaar because the platform itself is distributed all over the world and, like the Bitcoin hydra itself, takes every advantage of the borderlessness and spontaneous order of digital spaces in a way that maximizes human freedom.

Anytime we speak about such innovations, it’s hard to resist speaking about the extraordinary technology. But in the end, it is not really about cryptography, distributed networks, multisig payments systems, and so on. It is really about the universal empowerment of the individual human being.

I like to think of a simple woman in Mozambique, desperately poor but with a talent for sewing. Perhaps she makes hand-dyed bowties. She has a smartphone and a cell network, access to which runs about one quarter of her income. With this network, she can reach the entire world with her product, and even build a big business. With the maturing of the Bitcoin network, she can earn income that can become capital to build a thriving business.

It is not development aid or governments that did this. It is the power of entrepreneurship in the digital age. Thanks to technologies like OpenBazaar, the long-term future looks very bright.

Here is Bitcoin.com’s item on the FEE store