Will the Timeline of the Vegas Shooting Ever Stabilize?

The surprisingly malleable timeline of the Las Vegas shooting reminds me of this quotation from George Orwell’s 1984: “History has stopped. Nothing exists except an endless present in which the Party is always right.”

This timeline keeps changing for reasons unexplained, and each update is creating the appearance (without the admission) that something went very wrong. The worst mass shooting in modern American history seems to have taken place without wise intervention from those tasked with stopping such things.

One of the injured has already filed a lawsuit against the Mandalay Bay hotel, concert promoters, and bump-stock manufacturers. Strangely left out of the lawsuit: the police who assume the actual responsibility for the security of such events.

Why don’t people just accept the official story? As a result, in the age of instant free speech for everyone, conspiracy theories have exploded. False flag! Fake news! It’s a plot! It’s a coverup!

Jump down this rabbit hole, and you will never get out.

Why don’t people just accept the official story? What’s with the mass incredulity?

The problem is that the official story keeps changing, and promises to change again. Granted that spokesmen don’t have access to infallible truth—as much as people want them to—but the story has become adaptive in ways that raise eyebrows. Not only that: those who were actually there don’t agree on what you might suppose would be indisputable.

When Was Campos Shot?

For example, you might think it would be easy to discover whether the shooter smashed the window and started mowing down concert goers before or after he shot 200 rounds at the Mandalay Bay hotel.

If you have ever been in a Vegas hotel, you know that security is extremely tight. Cameras are everywhere. Highly trained guards watch everything. Everything is recorded. Imagine a moment in which the dude across or down the hall unloads that much ammunition through a door, creating a terrifying sound. You would know for sure when it happened, whether it was the first sound or came after smashing glass. And Jesus Campos, the security guard who was shot and miraculously survived, certainly would have radioed for help.

There’s enough here to keep conspiracy theorists busy for years to come. Knowing whether this happened before or after the mass shooting out of the window one might suppose would be settled by now.

Here is how the official timeline, as issued by Clark County Sheriff Joe Lombardo, changed in less than a week. He also suggested to reporters, in the course of a strangely hostile press conference, that the timeline could “change even more” in the future. 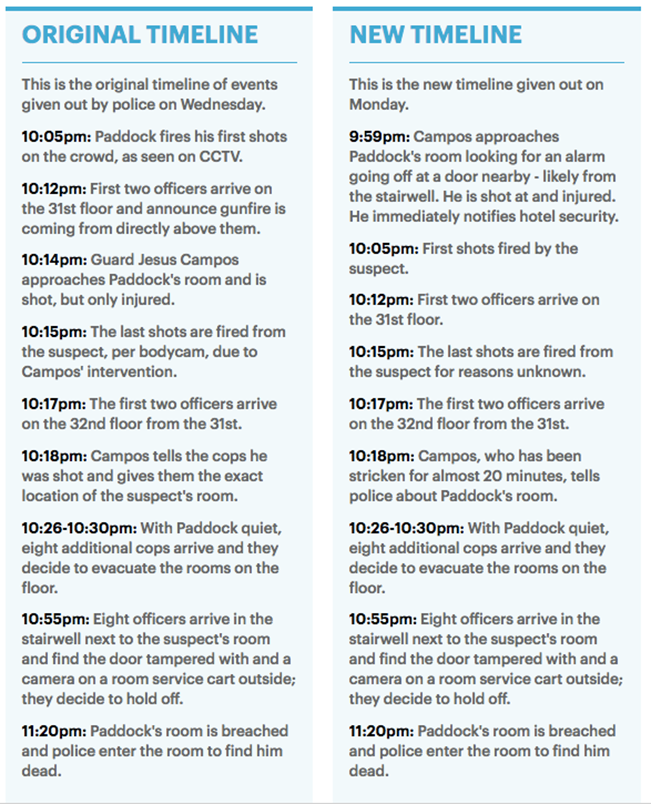 But as soon as the new timeline was issued, the Mandalay Bay hotel itself told Fox News that “what is currently being expressed may not be accurate.” No more detail was added.

There’s enough here to keep conspiracy theorists busy for years to come, especially given just how quickly and intensely this event was used by the pundit class to once again drum up support for gun control.

The Error of Conspiracy

The great mistake of conspiracy theorists is to presume that there is only one overriding purpose and controlling force at work in any event. In reality, an event this huge, this confusing, and with so many moving parts, presents an infinitely complex series of purposes, motivations, and responses.

Incompetence is usually more than enough to account for the anomalies. The grand theories further presume a perfect coordination between the intentions of the powerful and the outcomes in any event. None of this is the case. Most of the mistakes involving large-scale security failures trace to the exact opposite: the absence of coordination. That, in turn, is followed by the suppression of information.

What typically characterizes events like this and the response, especially when public officials are involved, is confusion, blame shifting, evasion, belligerent statements about nothing, and unsustainable assertions designed to portray official institutions in the best possible light. This happens even in the absence of anything nefarious going on at all.

This kind of incompetence is usually more than enough to account for the anomalies and changes in the official account of these events.

The worst part of far-flung theorizing about these events is that they overlook the bigger picture. And in this case, it is clear: the official security plan completely failed. Now, there might be perfectly good reasons for this. It is difficult to plan for a contingency that had never before revealed itself. And it is even more difficult to enact a response in the complete absence of a plan.

Even so, in all forms of publicly provided security services, there is a fundamental disconnect between the people they are supposed to serve and the institution that actually employs them. And when it comes to a conflict between the two, it’s the job and the public sector that win out.

In the end, there is no substitute for private protection. Anyone who follows official statements after such events knows they are structured to minimize PR damage to the official institution. This is so obvious that it gives rise to widespread (and largely justified) suspicion. And when the story changes and changes to match the PR priority of the day, public incredulity overwhelms the narrative.

And what is the lesson for the rest of us? The government that has promised to protect us cannot fulfill the grandiose promise, and it is a mistake to conduct your life as if it is capable of doing so.

We don’t know how all this Vegas stuff will shake out, but the broad outlines do not look flattering for the public-sector police: it is impossible to deny that it took fully one hour and 20 minutes from the first sounds of gunfire for the cops to breach the doorway.

The private guards at the casino will likely fare better. There is a lesson here: the market is the right choice for providing security service. In the end, there is no substitute for private protection.