Will Autonomous Vehicles Drive Us Into Endless Sprawl?

It won’t be AVs that single-handedly bring about that future on their own.

There’s been an ongoing debate in urbanist circles about whether autonomous vehicles (AVs) will damn us to perpetual sprawl and super commuting. I don’t believe that they will. In the first place, the business conditions under which AVs could conceivably induce more sprawl are unlikely. And in the second, there are numerous other factors that will affect the future of urban development in the US. That’s not to say we won’t double down on past mistakes, but it won’t be AVs that single-handedly bring about that future on their own.

No One Wants To Sell You a Self Driving Car

For AVs to even begin to induce more sprawl, they need to facilitate super commuting. For that to happen at any significant scale, they need to be ubiquitous and privately owned. And that is something I don’t think we’re going to see for one simple reason—it’s a product no one is selling.

Given the accumulated R&D costs of the last several years, the price a firm would need to charge for the first generation of personal AVs would be astronomical.

Ole Muskie notwithstanding, no one with capital to burn thinks selling private AVs is a winning strategy (with good reason). Given the accumulated R&D costs of the last several years, the price a firm would need to charge for the first generation of personal AVs would be astronomical. Moreover, a company selling personal AVs would give up on mountains of valuable data generated as the vehicle racked up mileage. Trip data feeds back into improving the ability of AVs to navigate and data about consumer habits is valuable as well.

We should also remember that the state of AV technology is still quite…meh. And in the absence of a step function improvement in the technology, the fastest way to get to market is to restrict the problem space. That means a driverless TNC service that can be limited to trips in certain areas under certain conditions. Shutting down service during inclement weather is a lot easier than trying to tell car owners when/where they can use their vehicle.

Aside from what firms are and aren’t doing with AVs specifically, it’s important to note how AVs fit into the larger business strategies forming around mobility. All the major players are looking at mobility as a commodified service and are bundling access to these services in a way that’s accustoming consumers to thinking multimodally. Even Ford no longer thinks of itself as a car company, now they sell mobility. 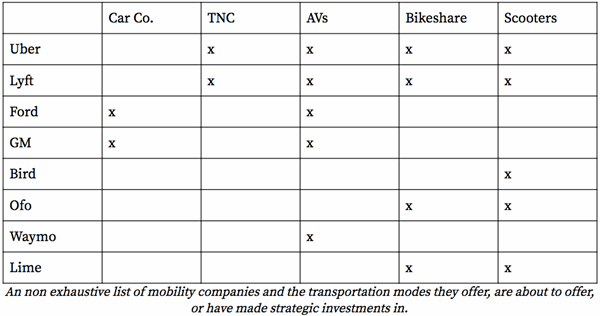 TLDR: The idea of selling personally owned AVs makes no sense and personal AVs are a prerequisite for AVs to even begin creating the conditions under which we might double down on low-density land use patterns.

The last 80 years of transportation policy in the U.S. has been all about making the world into a safer place… for cars. The interstate highway system, government-mandated sprawl, parking subsidies, etc were all explicit policy decisions that rendered car ownership the only sensible choice for most Americans. We engineered sprawl to accommodate the car, the car didn’t organically induce sprawl on its own.

Similarly, the policies we choose today will determine whether and how our cities function in fifty years time. If we allow densification where prices warrant it, if we support effective mass transit, if we permit firms to bring alternative transit modes to market… we’ll reduce sprawl and, in some places, maybe even begin reversing it.

My expectation is that YIMBY activism will liberalize land use policy to different degrees in different cities and that we’ll get marginally denser cities as a result. I further expect this to coincide with an explosion in transportation options and a movement to redo urban infrastructure so that we can accommodate transit modes other than driving. These are the things, taken together, that are going to shape our cities going forward. Technology will color the tradeoffs we make, but no single variable will determine the future alone.