Why We Fight over Western Lands

Last week’s surprising acquittal of Ammon Bundy and six others in the trial over the armed occupation of the Malheur Wildlife Refuge in Oregon has once again elevated federal land issues to the national stage, and many questions remain. But despite all the media attention on the trial, many have overlooked the underlying issues that make federal lands so contentious in the first place.

Nearly half of the entire western United States is controlled by federal land agencies.

If you’ve followed the news about western lands at all recently, you’ve likely heard of the Bundy family. Cliven Bundy’s ranch in Nevada was the site of a 2014 standoff with the federal government over grazing rights to public lands, and earlier this year two of Bundy’s sons led the 41-day occupation of the wildlife refuge in Oregon — a dispute that ended with the death of one of the occupiers and the arrest of several others on federal conspiracy charges.

But why are some ranchers so upset with the federal government? Much of it is the result of federal land policies that encourage conflict instead of cooperation. So let’s take a step back to understand how federal grazing policy works, and why it’s the source of so much conflict in the American West.

How the West Was Settled

The federal government owns a lot of land. Nearly half of the entire western United States is controlled by federal land agencies. And in some states, more land is owned by the feds than the state or residents themselves: Oregon is 53 percent federal land, Idaho is 62 percent, Utah is 65 percent, and Nevada is 85 percent federal property.

Some of this is federal property because it was set aside as a national park or forest reserve. But much of remains in federal ownership for another simple reason: It was never settled by homesteaders. To understand how public-land grazing works today, we have to understand how this homestead process worked. 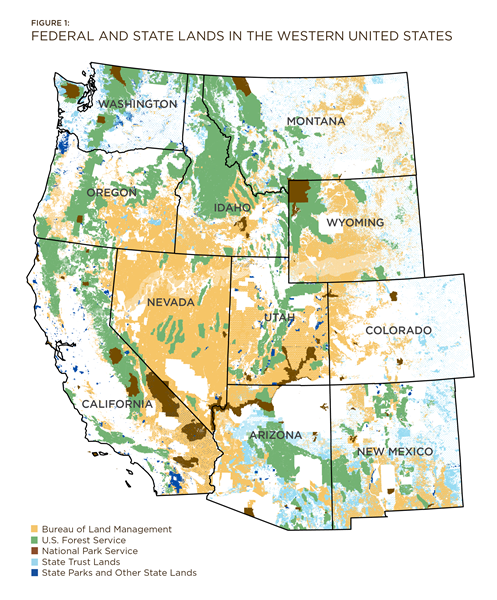 In the late 19th and early 20th centuries, U.S. land policies encouraged settlers to venture westward, where they found vast rangelands on which to graze their livestock. But there was one problem: The Homestead Act limited settlers to 160-acre claims, which were too small given the dry conditions of the western range. Settlers needed much more land if they were to eke out a living and “prove up” their homestead claims. Yet throughout the homestead era, the federal government never issued land claims large enough to support livestock grazing in the arid West.

With such small homestead claims, ranchers were forced to rely on nearby public lands to sustain their livestock operations. The use of this unclaimed public domain for grazing was later formalized into law to control and prevent overgrazing. In 1934, the Taylor Grazing Act gave the federal government the authority to create grazing districts on unclaimed public lands, issue permits, and charge fees. This essentially is the federal grazing system we have today.

Ranchers own very little private land, with most of their property value tied up in their ability to graze livestock on public grazing allotments

This means that a grazing permit can have a significant effect on the value of a rancher’s property. When these properties are bought and sold — as most of them have at some point — the new owner pays for the grazing permit, which is capitalized into the value of the base property.

The value of these grazing permits can be significant. In many parts of the West, ranchers own very little private land, with most of their property value tied up in their ability to graze livestock on public grazing allotments. For instance, Cliven Bundy’s ranch in Nevada — the site of the high-profile standoff in 2014 — is just 160 acres of private land. Before he stopped paying grazing fees and lost his grazing privileges, Bundy’s property had a grazing permit attached to it that gave him the ability to run livestock on a nearby 158,000-acre allotment.

What’s more, in many ways public grazing permits function like a form of private property. They are bought and sold along with ranches. Banks collateralize loans on the basis of permit values. And the government even taxes the value of grazing permits in capital gains and estate taxes.

What about the grazing fees paid by ranchers? Some have claimed that ranchers receive large subsidies to graze livestock on public lands in the form of below-market grazing fees, which raises the question: Why would ranchers revolt against the same government that grants them such a big handout?

The reality, it turns out, is more complicated. It is true that ranchers pay very little to graze a livestock on federal lands (in 2016, only $2.11 per “animal unit month,” or the amount of forage it takes to feed one cow and one calf for a month). That is far less than what it costs to run livestock on state or private lands. But grazing fees are only part of the story. Because of the base-property requirement for federal-land grazing, most ranchers paid the market value of their federal grazing privileges up front when they bought their ranch. This is not the case with private or state grazing leases. 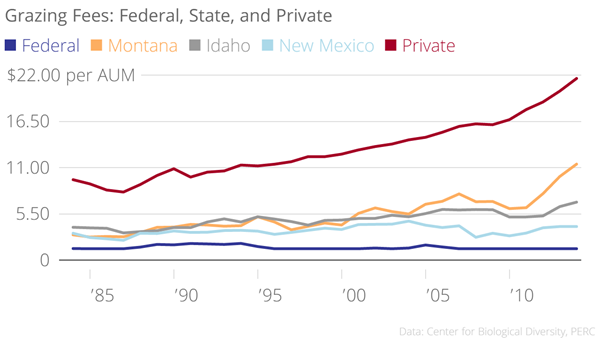 In addition, grazing fees on public and private lands refer to very different things. When other factors are considered — such as the costs of building and maintaining fences, supplying water, and providing other infrastructure on public lands (which are often already included on private rangelands) — public-land grazing is not much cheaper for ranchers than private alternatives. In fact, it can even be more expensive in some cases.

Today, the BLM authorizes just half the amount of grazing it did in 1954.

There is, however, one group that gets a bad deal from public-land grazing: U.S. taxpayers. The Bureau of Land Management and U.S. Forest Service spent $143.6 million on grazing management in 2014 but collected just $18.5 million in grazing fees — a loss of $125 million. And in our own study at PERC, we found that the feds lost about 90 cents out of every dollar it spent on grazing management between 2009 and 2013.

All of this goes a long way toward explaining why these issues remain so contentious, and why many ranchers today are angry about regulations or legal actions that undermine their traditional public-land uses. Ranchers have been gradually losing grazing privileges as federal land policies have shifted toward conservation and recreation instead of grazing, timber harvesting, and energy development. Today, the BLM authorizes just half the amount of grazing it did in 1954.

When ranchers’ grazing privileges are reduced, it affects their livelihoods and the values of their private property. This, in part, is the issue in Oregon and elsewhere across the West, where various groups are calling for local control of federal lands. Ranchers feel threatened by federal regulations and the environmental groups who use them as the basis for litigation to take away their grazing privileges, often without compensation. 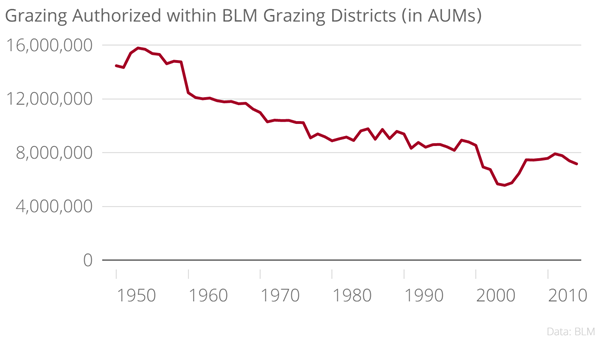 So what can be done? There are no simple solutions. The reality is that the current system encourages conflict, not peaceful negotiation. The rights that determine who gets to do what on public lands are poorly defined, and public-land use decisions are more likely to be settled by politics or litigation than by mutual cooperation or direct exchange, such as a “buyout” of ranchers’ grazing permits. The result is a system of federal land management that is strangled by what one former Forest Service chief described as a “Gordian knot” of litigation and regulation.

One possible solution is to create clearer property rights to grazing on public lands and then simply let groups trade. Environmental groups could then buy out ranchers’ grazing permits. This already happens to a limited extent, but the transaction costs are high due to regulatory barriers that prevent grazing permits from being used for conservation purposes.

We fight over western lands because it is unclear who has which rights.

In recent years, several environmental groups have advocated grazing-permit buyouts as a practical and peaceable conservation strategy. Others say the federal government should buy out ranchers’ grazing permits itself. Since public-land grazing loses so much taxpayer money, the argument goes, it would pay to have the government simply purchase ranchers’ permits and retire them. (It’s worth noting that the government apparently offered to buy out Cliven Bundy’s grazing privileges in the early 1990s, but he refused.)

Still, others insist that ranchers never had formal “grazing rights” to begin with. The federal government refers only to “grazing privileges” rather than formal rights, and courts have generally held that they can be revoked at any time. This fact has been used by the government and some environmental groups to justify grazing permit reductions without compensation.

The bottom line is this: We fight over western lands because it is unclear who has which rights. Land-use decisions are often made in the political arena or in the courts rather than negotiated locally between competing groups — and that is a recipe for conflict.

As long as these rights are unclear, the fights will continue. Until we find ways to clarify grazing rights and encourage more negotiation instead of conflict, we are likely to witness even more fighting over western lands in the future, regardless of what happens to the Bundy family.