Why Price Controls Will Result in Fewer Life-Saving Drugs

Price controls will result in lower prices in the short run, but fewer life-saving drugs in the future.

I wasn’t the only one who objected to Pelosi’s reckless idea.

We have 40 centuries of experience demonstrating that price controls don’t work. The inevitable result is shortages and diminished production (sellers won’t produce sufficient quantities of a product if they are forced to lose money on additional sales).

Which helps to explain why the Wall Street Journal also was not a fan of Pelosi’s proposal.

Here’s some of the paper’s editorial on the adverse impact of her proposed intervention:

Mrs. Pelosi’s legislation would direct the secretary of Health and Human Services to “negotiate” a “fair price” with drug manufacturers… Any company that refuses to negotiate would get slapped with a 65% excise tax on its annual gross sales that would escalate by 10% each quarter. Yes, 65% on sales. …The bill also sets a starting point for Medicare negotiations at 1.2 times the average price of drugs in Australia, Canada, France, Germany, Japan and the U.K.—all of which have some form of socialized health system. …foreign price controls have reduced access to breakthrough treatments. …Price controls are also a prescription for less innovation since they reduce the payoff on risky research and development. …Only about 12% of molecules that enter clinical testing ultimately obtain FDA approval, and those successes have to pay for the 88% that fail. …Price controls would hamper competition by slowing new drug development. The U.S. accounts for most of the world’s pharmaceutical research and development, so there would be fewer breakthrough therapies for rare pediatric genetic disorders, cancers or hearing loss.

A damaging indictment of knee-jerk interventionism, to put it mildly.

Well, a bad idea from Democrats such as price controls doesn’t magically become a good idea simply because it subsequently gets pushed by a Republican (unless, of course, you qualify as a partisan as defined by my Ninth Theorem of Government). 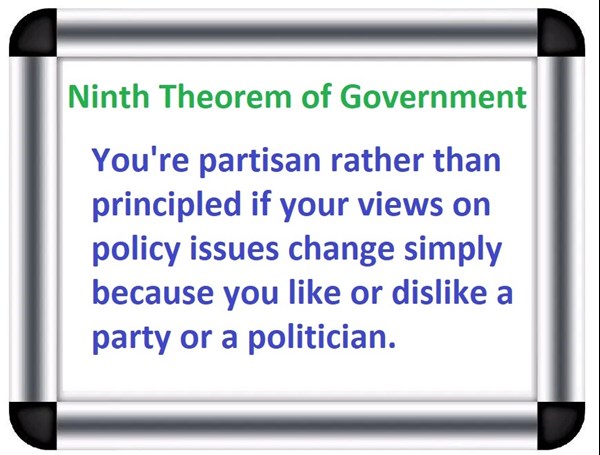 Unfortunately, we now have a new example of bipartisan foolishness.

Andy Quinlan of the Center for Freedom and Prosperity opined on President Trump’s misguided plan to adopt European-style price controls:

…other nations have been free riders on America’s innovative pharmaceutical industry. …they have enacted socialist price controls to limit what they pay knowing that the largest market would pick up the slack to ensure a steady supply of new lifesaving drugs. It needs to stop, but President Trump’s recent executive order is not the right way to do it. …his “Most Favored Nations” Executive Order to…limit…prescription medication payments made through Medicare… But this is a flawed way of thinking about the problem. Other nations are…engaging in theft via price controls. …drugs can take months or even a year longer to arrive in countries with socialist healthcare systems. Patients suffer as a result… Another likely consequence is less innovation. Some drugs in this new price environment will no longer be cost effective to be developed. Patients again will suffer. …Getting foreign jurisdictions to pay for their share of pharmaceutical innovation by putting a stop to price manipulation is a noble goal. But it should not come at the expense U.S. industry and patients.

A study by Doug Badger for the Galen Institute points out that the Trump Administration’s approach—for all intents and purposes—would use Obamacare’s so-called Center for Medicare and Medicaid Innovation to impose foreign price controls on prescription drugs in the United States:

The Affordable Care Act created CMMI and vested it with extraordinary powers. …The statute also shields CMMI projects against administrative and judicial review. …two HHS secretaries have claimed authority under CMMI to mandate a Medicare Part B payment mechanism without having to seek new legislation. …the Trump administration issued an advance notice of proposed rulemaking (ANPRM) announcing its intention to propose a far more sweeping Medicare Part B drug demonstration project….to…scrap the ASP Medicare reimbursement methodology in favor of one based on drug prices paid in other countries. …CMS is considering the establishment of an “international price index” (IPI). It would calculate the IPI based on the average price per standard unit of a drug in select foreign countries.

This is troubling for several reasons:

…the other countries on the proposed list have lower living standards than do Americans, as measured by per capita household disposable income… The median disposable per-capita income in the IPI countries is thus about one-third less than in the U.S. …Medicare reimbursement for physician-administered drugs would largely be based on international reference prices in which the regulatory agency of one government sets drug prices based at least in part on those set by regulatory agencies in other countries. …for all the different payment methodologies Congress has devised for medical goods and services, it has never based reimbursement on prices that prevail in foreign countries. The agency’s role is to implement congressionally-established reimbursement systems, not to create them out of whole cloth.

As you might expect, the Wall Street Journal has also weighed in on Trump’s plan.

The editorial points out there will be very adverse consequences if the President imposes European-style price controls:

Mr. Trump signed an executive order that could make…life-saving therapies less likely. Mr. Trump has been threatening drug makers for months with government price controls. …The President’s order directs the Department of Health and Human Services to require drug makers to give Medicare the “most favored nation” (i.e., lowest) price that other economically developed countries pay. …This ignores some crucial details. …Other countries also have to wait longer for breakthrough therapies, which is one reason the U.S. has much higher cancer survival rates. …The larger reality is that developing novel therapies isn’t cheap and can take years—sometimes decades—of research. Most products in clinical pipelines fail, and even those that succeed aren’t guaranteed to produce a profit. …The risk for all Americans is that drug makers will shelve therapies for hard-to-treat diseases that are in the early stages of development because of the high failure rate and low expected profit. This risk is most acute for therapies that treat rarer forms of diseases… The victims will be the cancer patients of the future, including perhaps some reading this editorial.

The bottom line, as I noted in the above interview and as many others have observed, is that other nations are free-riding on American consumers.

They get access to most of the drugs at low prices (since pharmaceuticals are cheap to produce once they are finally approved).

But the net result, as I tried to illustrate in this modified image, is that American consumers finance the lion’s share of new research and development. 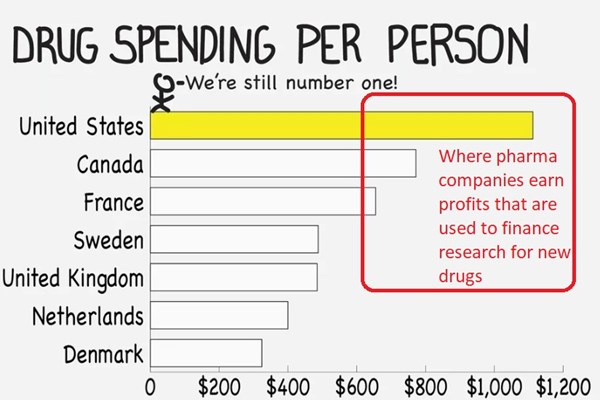 But we’d be jumping from the frying pan into the fire if we had European-type price controls that stifled innovation by pharmaceutical companies.

Sure, we’d enjoy lower prices in the short run, but we would have fewer life-saving drugs in the future.

P.S. There’s an analogy between prescription drugs and NATO since Americans bear a disproportionate share of costs for both. However, there’s a strong argument that there’s no longer a need for NATO. By contrast, I don’t think anyone thinks it would be a good idea to stifle the development of new drugs.

P.P.S. As an alternative, a friend has been urging me to support the idea of using the coercive power of government to mandate that American-based pharmaceutical companies charge market prices when selling overseas—an approach that would give foreign governments a choice of paying more or not getting the drugs. That seems like a better approach, at least in theory, but my friend has no answer when I point out that those companies would then have an incentive to leave the United States (as many firms did before Trump lowered the corporate tax rate to improve US competitiveness).