Why Our Shrinking Middle Class Is a Good Thing

The chart below is on display at the Building Museum in Washington, D.C., as part of its current “House and Home” exhibit. As the title of the chart suggests, America’s middle class has been shrinking over time, from 61 percent of US households in 1971 to only 50 percent in 2015, when middle class is defined as households earning between two-thirds and twice the median household income. And that middle-class shrinkage apparently implies that there is a “widening gap between what people earn and the housing that is affordable to them” as does the leading question, “Are you struggling to afford your home?”

However, there are at least two serious issues and questions that need to be addressed: a) if the middle class did shrink, where did they go? and b) is housing really becoming less affordable for Americans? 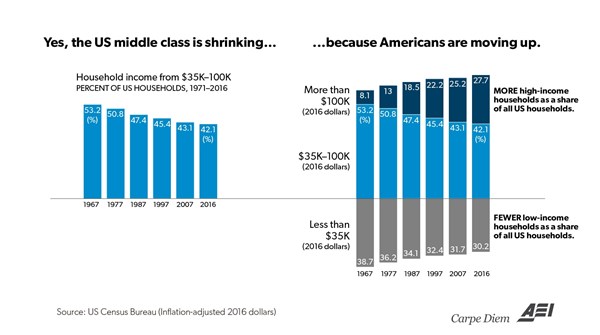 Over a slightly longer time period (1967 to 2016) and using a slightly different income measure of middle-class income ($35,000 to $100,000 in 2016 dollars from Census Bureau data), it’s true that the share of US middle-class households has been declining, from 53.2 percent of US households in 1967 to 42.1 percent in 2016, see left side of the graphic above. But where did the shrinking middle-class US households go?

There has been a shrinkage of America’s middle class over time (by either measure above), but it’s not a story of economic gloom and doom characterized by a “widening gap between what Americans earn and the housing they can afford” but rather a positive story of economic prosperity and upward mobility that has gradually but consistently lifted millions of lower-income and middle-income US households into higher income groups over time. The fact that nearly 28 percent of US households annually earn $100,000 or more runs counter to the widespread narrative of an American middle-class in decline and deserves much greater attention as evidence of a dynamic and prosperous America with significant income mobility.

The top graphic above from the Building Museum makes the claim that because “median income has stagnated” while “home prices have surpassed pre-recession levels” there is a “widening gap between what people earn and the housing that is affordable to them.” Unfortunately, the data don’t support that claim, and in fact buying a new house today is more affordable than it was in the 1980s, 1990s, and most of the 2000s, when affordability is measured by the National Association of Realtors’ (NAR) “Housing Affordability Index” (see chart below). 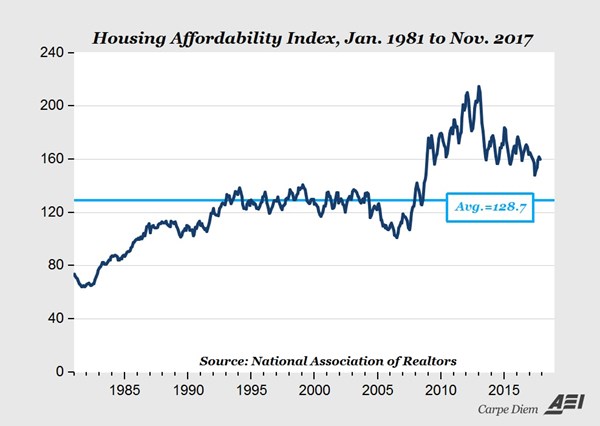 According to the NAR, “the Monthly Housing Affordability Index measures whether or not a typical family earns enough income to qualify for a mortgage loan on a typical home based on the most recent monthly price and income data.” For example, the annual income necessary in November 2017 to qualify for 30-year, fixed rate mortgage at 4.2 percent to finance the purchase of a median-priced home of $248,800, assuming a 20 percent down payment, would be $46,656. The median annual family income last November of $74,502 would be 159.5 percent of the qualifying income necessary to purchase a median-price, existing single-family home and would, therefore, be a Housing Affordability Index (HAI) of 159.5 (see chart above).

Housing has become more affordable to the typical American family. Since the HAI has been above 100 in every month since April 1986, that means that the typical US family has earned enough income to qualify for a mortgage to purchase the median priced home in every month for more than 40 years. And although housing affordability today at 159.5 is slightly below the peaks of above 200 in 2011 and 2012, it’s above the average HAI of 128.7 over the last 37 years, and is twice the housing affordability of the early 1980s when mortgage rates soared to double-digits for almost a decade and peaked at 18.6 percent in October 1981.

Over the nearly 40 years that the NAR has reported its quantitative measure of monthly affordability, I think it’s fair to say there has not been “a widening gap between what people earn and the housing that is affordable to them.” In fact, it’s been exactly the opposite — housing has become more affordable to the typical American family.

I haven’t personally visited the Building Museum to see the “House and Home” exhibit, but I will try to visit there in the next few weeks and view the “Shrinking Middle” chart for myself. Thanks to my AEI colleague Olivier Ballou for the tip, the top photo above, and for creating the middle graphic above.

For now, I’d conclude that the Building Museum is presenting two false narratives to the public: a) that a shrinking middle class, while statistically true, represents an ongoing economic decline for the typical American, and b) that a shrinking middle class has resulted in housing becoming less affordable for the typical American family. As I hope I’ve shown above, both of those narratives are false.