Why International Students Are Giving Up on US Colleges

Like everyone else outside the Beltway, international students care more about their wallets than the president’s tweets.

The Wall Street Journal reported on Tuesday that new enrollments of international students at American colleges are shrinking for the first time in over a decade. According to the Institute of International Education, 109,000 international students enrolled as first-time undergraduates in 2017, a decline of 7,000 (6 percent) from the previous year. That marks the second straight year of declining new international enrollment at U.S. institutions.

Commentators have attributed the decline to a “Trump effect,” wherein the president’s aggressive rhetoric on immigration dissuades foreign students from coming to America. Indeed, that has probably influenced a few students’ decisions, particularly those from the seven countries targeted by the administration’s travel ban. But students from several unaffected countries have also shunned American colleges, suggesting that the primary reason for the trend lies at the bank rather than the visa office.

In 2016, the typical foreign student attending a selective American college paid $23,500 in tuition and fees, more than three times the price a U.S. citizen paid. Tuition for international students increased by nearly $5,000 since 2012, while tuition for Americans went up only $450. While tuition for foreign students has risen for the last two decades, the spike over the last four years has been particularly dramatic. 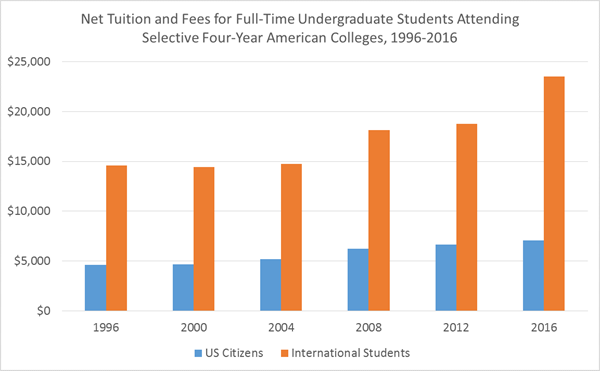 Colleges are keen to enroll international students since they generally receive much less financial aid than American citizens, if they get it at all. This makes international students a key source of additional revenue for universities when domestic students are tapped out. Until now, foreign students have been happy to pay high prices for a spot at a prestigious American university. But the recent decline in new international enrollments suggests that the party can’t go on forever.

Time to Trim the Budgets

Colleges have the power to reverse this trend by working to lower costs and bring down tuition.

Colleges in America spend more per student than virtually every other country in the developed world. Raising tuition for international students has, until now, been a straightforward way to pay for big university budgets. But it seems that some foreigners have finally had enough. Institutions might need to turn to a less palatable but ultimately necessary alternative: lowering the underlying cost of education.

Blaming a “Trump effect” for declining international enrollment allows colleges to deflect blame for the trend, but a transient political phenomenon is likely not the primary reason foreign students are fleeing American colleges. But on the flipside, colleges have the power to reverse this trend by working to lower costs and bring down tuition. Like everyone else outside the Beltway, international students care more about their wallets than the president’s tweets.