Why Big Oil Is Lobbying for a Carbon Tax

It’s always a good idea to “follow the money” when looking at how policy really gets made in Washington.

In one of my periodic attempts to create themes for these columns, I developed a “fiscal fights with friends” category.

Today’s column could be considered Part IIIb since I’m going to revisit the case against energy taxes. Except it’s not going to be a friendly assessment. That’s because there’s a legitimate case (made by Jerry) for a carbon tax, based on the notion that it could address an externality, obviate the need for command-and-control regulation, and provide revenue to finance pro-growth tax cuts.

But there’s also a distasteful argument for such a tax and it revolves around crony capitalists seeking to obtain unearned wealth by imposing costs on their competitors.

Elon Musk already is infamous for trying to put taxpayers on the hook for some of his grandiose schemes. Now, as reported by Bloomberg, he wants an energy tax on American consumers. 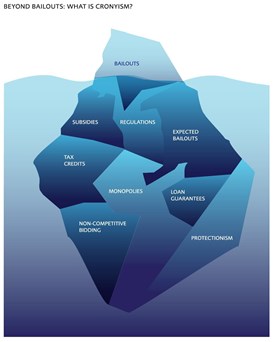 But what the article doesn’t mention is that such a tax would make his electric cars more financially attractive. It’s rather unseemly (and I’m bending over backwards for a charitable characterization) that a rich guy is pushing a tax on the rest of us as a way of lining his pockets.

What’s ironic, though, is that he’s probably being short-sighted because a carbon tax presumably would hit coal, and that’s a common source of energy for electrical generation. So while regular drivers would pay a lot more for gas, Tesla drivers would pay more at charging stations.

Some big oil companies also are flirting with an energy tax for cronyist reasons. An article in the Federalist notes that some of those firms support carbon taxes because they want to create hardships for their competitors.

…carbon taxes do not affect all fossil fuels equally. So just as some fossil fuels are much more carbon-intensive than others, here we can begin to understand how, beyond the benefits of predictability, a carbon tax might actually help some fossil-fuel providers… As a recent National Bureau of Economic Research working paper illustrates, for example, in the United States a tax on carbon would disproportionately impact the use of coal relative to natural gas for energy production. …Don’t be surprised, then, if some domestic producers of natural gas end up promoting a carbon tax, not only out of concern for regime stability but also out of a concern to make their product more competitive in the energy marketplace.

To be fair, I suppose that Musk and the energy companies might actually think energy taxes are a good idea, so their support may have nothing to do with self-interest.

But it’s always a good idea to “follow the money” when looking at how policy really gets made in Washington.

Even more depressing, the adoption of one bad policy may lead to the expansion of another bad policy. More specifically, some proponents of energy taxes admit that ordinary taxpayers and consumers will be hurt. But rather than realize that a new tax is a bad idea, they decide to match a tax increase with more spending. Here is a blurb from a report by the American Enterprise Institute.

Using emissions and other data from 2013 and 2014, we also find that the revenue from the carbon tax could be enough to expand the EITC to childless workers and hold other low income households harmless, combining a regressive tax with progressive benefits.

This is not good. The EITC already is the fastest-growing redistribution program in Washington. Making it even bigger would exacerbate the fiscal burden of the welfare state.