Welcome to the real world, where you can’t force people to agree with you.

I understand that old people (that’s me) always think the “younger generation” is confused and likely to lead us to disaster. But...c’mon. Isn’t it true this time? Hasn’t our education system produced a giant cohort of fragile snowflakes and petty tyrants?

It looks like it. At UNC Chapel Hill this week a “flier” was discovered, hundreds of copies of which had been distributed around the campus. It encouraged students to “bash the fash!”, meaning physically assault fascists. The definition of “fascist,” conveniently, appears to be anyone who disagrees with the smothering leftist orthodoxy that the flier-istas embrace. 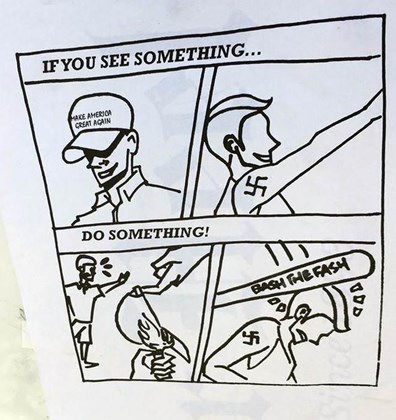 One sign of fascism, according to the flier, is the wearing of a “Make America Great Again!” ball cap. Since that is the symbol of our current President, a substantial part of the population is “fascist.” Earlier in the week, a set of “instructions” – of unknown origin – circulated nationwide. This “meme” claimed that “It’s okay to punch Nazis, and of course white male libertarians who advocate free speech.” If you disagree with me, I get to punch you, provided I’m one of the anointed who has politically correct views.The State specializes in violence. Our leftist zealots have no hope of violently resisting the power of the State.

There are two difficulties here. First, these advocates are confused about the role of violence as being effective for their side. The State specializes in violence. It has (and, in fact, must have) guns, helicopters, tanks, and fighter jets. Our leftist zealots have no hope of resisting the power of the State. If it comes to violence, the State will win.

The bullies of the left are physically brave when confronting a few, isolated “fascists” on their ideologically segregated college campuses and “safe spaces.” But if violence starts, that’s not where it will end. President Trump this week has considered drafting national guard troops for immigration enforcement. Even if one grants (and I don’t) that the Trump side is dangerous, bringing a pocketknife to a machine-gunfight is going to turn out badly. The last thing that the political minority should advocate is violence.

But many in the new generation of political activists assume that they will control the coercive power that decides who gets to speak, and who is “bashed.” Whenever they aren’t, of course, they are the first to advocate free speech rights, to be exercised by themselves and those who agree with them.Rather than bashing, you might want to try talking to the folks who disagree with you.

That’s not how it works. I understand that it is difficult when young people find themselves betrayed by “democracy.” It’s a stunning realization when you discover that a substantial part of the American population disagrees with you. After all, you took classes at the best schools, where they told you how smart you are; you gathered into discussion groups where “I feel that...” counts as an argument. You feel right now, for the first time, that the U.S. is heading in the wrong direction. Welcome to my world, except that I’ve had that feeling for decades.

A generation whose entire experience with politics was vacuously validated by the Obama mass-hypnoses of 2008 and 2012 is suddenly confronted with the fact that one must persuade people. You can’t force them to agree with you. Because if anyone is going to be subjected to force, it’s the political minority. Rather than bashing, you might want to try talking to the folks who disagree with you. At worst, you’d be asserting the right to talk, and to disagree, even if your side no longer controls the coercive apparatus of the State.

Republished from the Independent Institute.

Michael Munger is the director of the philosophy, politics, and economics program at Duke University. He is a past president of the Public Choice Society.