Why Are Tel Aviv Bars Reviving the Speakeasy?

What is the future of Israel? Many people are convinced: it is all about freedom and prosperity.

There are many unexpected features of Tel Aviv–first among them is that it is a normal, happy, peaceful, prosperous city–but I couldn’t wait to write about one in particular.

It’s loud. It’s happy. It’s straight out of 1920s. You just have to imagine an older hotel in the center of Tel Aviv. You walk through the lobby and around the corner, opening some tall doors with etched glass. Inside is a relatively small space populated by plush red sofas and tiny tables, so that when the space is full, you feel like you are nuzzled elbow to elbow.

The place is packed every night except during Shabbat. The bar is as profitable as the hotel, and sometimes more so.

The music is all Prohibition Era, some original and some recreated in the US in the 1990s when this was extremely fashionable. It’s loud. It’s happy. It’s straight out of 1920s. It’s Boardwalk Empire come to life. 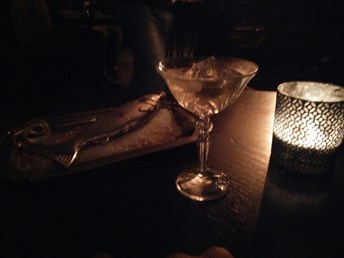 And people dress the part. You never see a suit and tie on the streets in Tel Aviv. But people get dressed up to come here, playing the part. It’s flappers and gents.

People are being served the wildest looking cocktails, in seashells, with flowers on top, bellowing with smoke from some dry ice trick. A waitress is rolling a baby carriage around the room, giving people shots of some mystery liquor, again from sea shells.

A favorite martini–it is called “Not a Vesper”–is being served in a glass with a refill inside a fish-shaped steel flask that is inexplicably served on a bed of salt with a side of olives.

The bartender has some kind of strange and amazing expertise. He can make music by handling two cocktails at once. He pours from one receptacle into another while making a stream of liquid that seems 24 inches long and vanishes almost as it is made.

He is lighting fruit on fire. He is slinging drinks around three at a time. He puts on such a display that the patrons can’t help but be in awe. This guy has a lifetime job with a skill level to match. 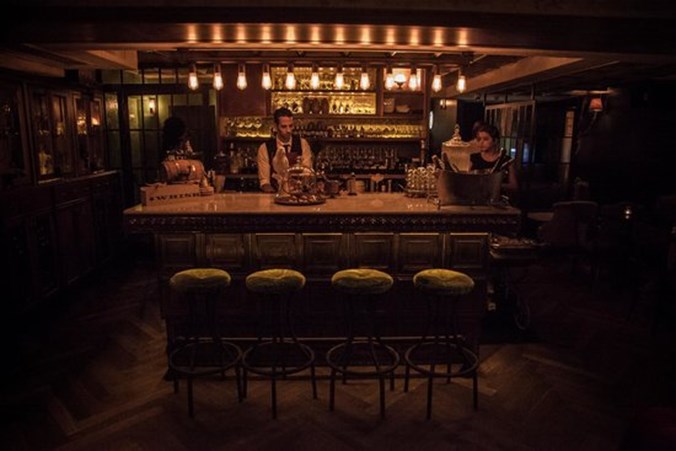 Oh and get this. Most liquors and mixtures are decanted into hilariously thrown back apothecary bottles that also look like they are from the 1920s. Some of the mixtures, the ones that the bar is most proud of, are made right there in-house.

So this is a speakeasy in every respect except one: there is no Prohibition at all! Alcohol is freely available and actually extremely affordable. Nearly every brand of liquor you can buy in the US states is for sale in random stores everywhere. You can buy it and sit on a bench on the sidewalk and drink it. No one is going to bug you.

No one is carded in any bar (confirmed by many people who would be considered “underage” in the US). There were no enforcers that I could see anywhere. Actually, in the whole time, I was astonished not to observe a single member of the police force on any street anywhere in Tel Aviv, nor a police car. You could say: that’s because they were in plain clothes, and that might be true. I’m just reporting what I saw, or didn’t see.

Why Is this Happening Here?

Back to the bar. I’m aware of the same decor and sensibility having obtained something of a revival in the US over the last decade. Somehow I didn’t anticipate finding it in Israel. And this is hardly the only bar. I heard tell of several others in Tel Aviv. It seems to be a thing.

I am going to venture a theory, and it mostly stems from my entire experience in Tel Aviv, and, to some extent, in Jerusalem. This is a country that has undergone solid economic growth over the last ten years. Economic freedom is on the rise.

More importantly, the structure of economic life has changed. It is host to a thriving tech sector, has virtually no unemployment problem, and has experienced solid economic growth over the last decade, though it could be much higher.

The distance between the socialist economics of the founding of the state of Israel (in 1948) and today can’t be greater. You know Waze? It was founded and developed in Israel. Same with Zebra (breast cancer detection), Nexar (an app to stop car crashes), Vroom (for car shopping), and so many others. There is a fantastic WeWork in Tel Aviv that is bustling with energy.

Technology has been crucial to boosting career prospects, a sense of entrepreneurship, and some bright hopes for the future. The distance between the socialist economics of the founding of the state of Israel (in 1948) and today can’t be greater. No one really talks about state-managed anything anymore, not in a way that is optimistic for this model. Even the Kibbutzim are long ago privatized.

The markets in the central city provide an array of goods, spices, fruits, and vegetables that most Americans will never encounter. The prices are fantastic – and, yes, you are expected to haggle over everything!

It’s true that by reading the American press, you would never hear about this. The US press covers Israeli affairs every day, but it is almost always about war and conflict, politicians and negotiations, interventions and struggles.

I’ve never traveled to a place where I received so many messages telling me, in so many words, to be careful and come back in one piece. And yet, I can’t remember feeling safer in any place in the world, despite all the seeming randomness in the city itself.

The daily white noise of the US media's reporting on the Middle East has nothing to do with the lives of average Israelis. The people in Israel that I spoke to–and this is certainly true of the remarkable young people involved with Students for Liberty in Israel–have fallen in love with commerce and the liberty and prosperity it implies for their lives.

So I’m thinking back to Prohibition days in the US. It came about at a time when the American people were fed up with war, ready for normalcy, enjoying new-found freedom and prosperity. Here was the first generation fully to experience driving, moving, choosing new career paths, looking for a better future.

Reclaiming speakeasy culture is a way of saying: freedom will never be taken away, no matter what the public authorities claim. The generation that embraces the Speakeasy culture wants to move forward, beyond the old world, beyond the conflicts and wars, beyond the controlled society of the past and toward something new and better. This is precisely the feeling I picked up from the young professional culture in Israel. It is an ethos that delights in making something new, and not wallowing in the past.

That whole Prohibition thing in the US was ridiculous–you can’t get rid of alcohol in the US from passing a law–but there were ways around it. And the ways became a culture of its own, one that has made an impression on the world. Reclaiming Speakeasy culture is a way of saying: freedom will never be taken away, no matter what the public authorities claim.

So too in Israel today. 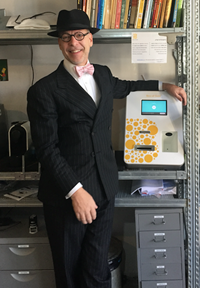 There are many examples of this, and I will write about them in the coming weeks, but let me give a shout out to the Bitcoin community. There is a Bitcoin embassy across from the Tel Aviv stock market, where the Students for Liberty conference was held. There is an ATM there that is busy all day. On Sunday night, there is a meetup that I attended with some of the smartest people I’ve met. I went there following an interview with the nice people who run the Bitcoin Academy.

It’s all about the indefatigable determination to live well, despite every political imposition and despite all the craziness around you The Israeli currency, the Shekel, is strong and stable. Still, the interest in cryptocurrency is high and growing, so much so that average cabbies can talk about it with some knowledge. The day I was there, there was a steady stream of people converting Shekels to Bitcoin.

It is true that Israel has its extreme left and its extreme right. That’s politics, there, here, and everywhere. The question is: what is making people’s lives better right now? What is the future? Many people are convinced: it is all about freedom and prosperity. This is always a better solution than political management. It is also the only true path to peace.

So, yes, Prohibition chic makes some sense here. It’s all about the indefatigable determination to live well, despite every political imposition and despite all the craziness around you. Play the right music, get the right bartender, wear the right clothes, and you get it: freedom is your right. Right now, wherever you are.