On June 23, 1926, John Maynard Keynes delivered an unusual economics lecture at the University of Berlin. This event has gone almost completely unnoticed by Keynes’ principle biographers, despite what would seem to be a historically significant product. A few months after the event, Keynes heavily edited the Berlin lecture into his well known essay, “The End of Laissez-Faire.” The resulting pamphlet is arguably Keynes’ second most famous work, after the General Theory, as it articulates a formative step in his broader case for using the tools of the state to prescriptively intervene in certain matters of economic policy.

The historical neglect of Keynes’ Berlin lecture is unfortunate, as it obscures a troubling feature of his economic thought. More specifically, Keynes used the occasion to advance an economic argument for population eugenics. Population growth was one of the primary areas where Keynes believed that the principle of laissez-faire should be abandoned. As he stated in the derivative essay:

The time has already come when each country needs a considered national policy about what size of population, whether larger or smaller than at present or the same, is most expedient. And having settled this policy, we must take steps to carry it into operation.

The time may arrive a little later when the community as a whole must pay attention to the innate quality as well as to the mere numbers of its future members.

There is reason to believe that this overtly eugenicist nod from the essay comprised an even larger portion of his Berlin lecture. Several German-language newspapers covered the event. Their reporting focused heavily upon what was considered one of the primary takeaways of Keynes’ lecture. Its message was received as an attempt to modernize and operationalize Thomas Malthus’ famous theory of runaway population growth. To do so he espoused deploying unnamed tools of the state to “manage” the population of a given country, including with an eye toward maintaining what he saw as a desirable racial stock.

Keynes in fact had advocated such policies for many decades, and had previously attributed them to the proliferation of “laissez-faire” doctrine, as in this 1923 editorial for the New Republic magazine: 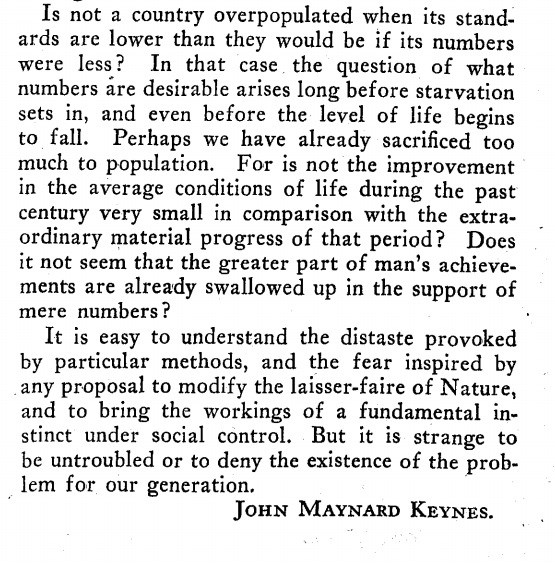 Keynes’ frequent eugenic nods are deeply bigoted by modern standards, even as they were common among intellectuals in his day. The 1926 Berlin lecture still stands out as an exceptionally egregious case, both for its close connection to the development of Keynes’ more famous economic assault on laissez-faire and for its timing.

Though the text of the original lecture has not survived, a direct glimpse into its severity may be seen in the reaction of one of its witnesses. Economist Ludwig von Mises, then visiting from the University of Vienna, was in the audience at Keynes’ Berlin talk. A few months after the lecture he wrote a short but devastating critique of Keynes’ adapted essay for a German-language periodical.

Making note that it was based on the Berlin lecture, Mises did not weigh directly into the Malthusian debate it had since provoked. He did however single out the deeply unsettling implication of Keynes’ argument. As Mises wrote:

Certainly there were found among his listeners some, who in the last few years were driven out of the land in which they had worked and lived; and many, who wish to emigrate from an overpopulated Middle Europe and cannot, because the workers of more thinly settled lands defend themselves against the addition of competitors. And Keynes will also certainly know that protectionism has put Germany and England in the most difficult economic situation.

Clearly Keynes’ nod to state-designed population control had struck a nerve, including with his own audience at the Berlin lecture hall. The resulting implications of this context upon the essay it produced are similarly disturbing to contemplate.