What Franz Cuhel Can Teach You about You

Last week, I was honored to deliver a lecture as part of winning the Franz Cuhel Memorial Prize for Excellence in Economic Education, given as part of the Prague Conference on Political Economy sponsored by the CEVRO Institute. I was deeply humbled to receive this award. But the real reason I’m telling you this is to brag, of course, because, normally, there would be no reason you should care.

Cuhel said that there are three stages to human decision making, and they sound rather awesome in German.And yet there is a reason you should care about Franz Cuhel, who lived from 1862 to 1914, and participated in seminars in Vienna in the early years of the Austrian School of economics. He had some fascinating insights into the structure of human decision making and what it implies for our lives and economic institutions. Sadly, not much of his work seems to be translated into English, but his most famous article is. I’m also relying on summaries and the high recommendation of Ludwig von Mises, who seems to have been heavily influenced by him.

Cuhel believed that the theory of wants was undeveloped within economic science. So he set out to improve it, and, in doing so, he posited an interesting taxonomy that transversed the realms of psychology and economics.

He said that there are three conceptual stages to decision making, and they sound rather awesome in German.

Stage one: Wohlfahrtsbedürfnis. Here is a want that stems from a desire for an improvement in your well being. You are hungry. You are bored. You are sick. You are unloved. You are poor. To recognize this is to discern a psychological sense of dissatisfaction with your lot, at this current moment.

Stage two: Verwendungsbedürfnis. Here is the point at which you discern a solution to your plight. Your hunger can be relieved by the acquisition of a Big Mac. Your boredom can be alleviated by playing Tiny Wings on your iPhone. Your sickness can be cured by a martini. The absence of love you feel can be filled by getting a dog (or another martini). This stage leaves the realm of psychological and explores possibilities in the physical world, which means that you now must grapple with economic possibilities.

Stage three: Verfügungsbedürfnis. Here is the point at which you gain control over the good or service that you have imagined that you must have. You must take an action. You hit the drive-through. You download the app. You run to the bottle-o to buy some gin. You troll the dog pound for a new mutt. All these actions are attempts to gain control over some resource that you see as a means to achieve your end. Now you are heavily grappling with real-world economics, getting something now.

What’s especially interesting here is how he navigates the tricky relationship between psychology and economics. In our heads we can imagine all we want. We can think of utopias. We can imagine ourselves living and thriving on Mars. We can see the whole world living in riches instantly. We can be kings, beggars, supermodels, rock stars, unicorns, or anything else. Our imagination runs wild, and this is all well and good.

But once we start the second stage, we must grapple with something else: the actual external world. Here is where we must start to curb our enthusiasms. What can we actually achieve? What is possible? Is there an open fast food restaurant within driving distance? Do I have a strong internet connection? Am I old enough to buy a drink? Will the dog pound give me a dog even though I don’t know how to take care of one?

A law is never a good way to go from Wohlfahrtsbedürfnis to VerfügungsbedürfnisIt is precisely because we must leave stage one to enter into stage two and three that economic science offers such a dose of reality. Not everyone welcomes this. Economists are forever in the thankless but necessary role of the wet blanket: telling people what is actually possible and what are the limits. Legions of intellectuals have wanted to pretend economics doesn’t exist. They never leave stage one. They are forever languishing in Wohlfahrtsbedürfnis.

Think of, for example, the architects of Obamacare. Their thinking was no more complex than: everyone should have awesome health insurance that covers everything and it should be completely affordable. They put this idea into a law.

A law is never a good way to go from Wohlfahrtsbedürfnis to Verfügungsbedürfnis. It usually means that something has gone very wrong during the Verwendungsbedürfnis stage. So of course Obamacare blew up.

It’s hardly the first time. And it won’t be the last.

Now, there are other implications of Cuhel’s theory. Human want begins in the imagination. Here is the initial stage of valuation. Here we imagine a possibility, an ideal, and we decide just how important it us to us. To us and us alone. Whatever happens after this, the desire is individuated. It is inseparable from our self-perceptions, which no one else can evaluate, share, or fully discern in all their particulars.

For this reason, as Cuhel stated very clearly, there can be no scientific comparisons made between individual valuations. Value cannot be compared between two people, much less added or otherwise manipulated mathematically. If we try to do that, we are engaged in fantasy. Value is ordinal, not cardinal.

And the Takeaway Is...

Now we are getting to some radical stuff. If this is true, all that is truly scientifically valid must wait for action in order to discern want satisfaction. And that action cannot be somehow aggregated with other actions to arrive at some big macroeconomic conclusion. This is why it is unscientific to talk of how much an education program will benefit society, an arts subsidy will bring massive social happiness, or how a surveillance state will make everyone feel safe.

I wish this great institution all the best in its pursuit of science, liberty, and gigantic German words.A typical proposal that does violence to Cuhel’s theory goes like this. Let’s tax the rich and give money to the poor, because, after all, those taxed resources are less highly valued by the rich than they would otherwise be valued by the poor. It turns out: you can’t really say that.

You can’t actually know these things about huge groups. You can’t even know this about two people. If Cuhel is right, the best form of society we can create to maximize perceived value on the part of every single person is one that is free: people are free to perceive problems, imagine solutions, and act on possibilities. This is why Cuhel’s work here leads inexorably to liberal conclusions. You have wants? You need freedom in order to get them satisfied.

So, cheers to Cuhel, long dead, long forgotten, not even translated to English. However, he was obviously brilliant and insightful. Minds such as this make the case for why freedom is inseparable from the good life.

Finally, let me offer my special thanks to the CEVRO Institute and the Prague Conference on Political Economy. I appreciated the prize so very much, and I wish this great institution all the best in its pursuit of science, liberty, and gigantic German words. 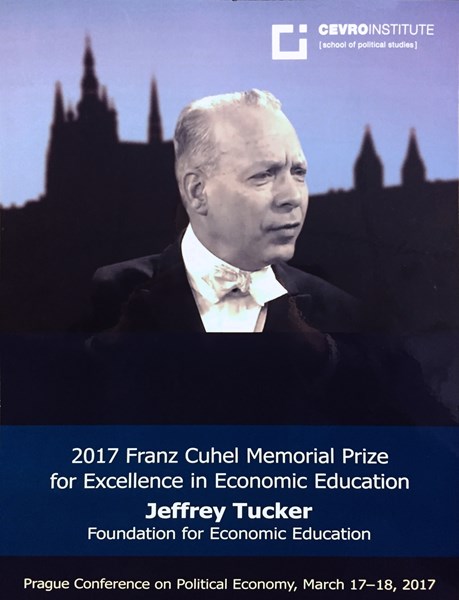