The escape from destitution and uncertainty of subsistence farming is one of the greatest accomplishments of the modern world. More people live longer, healthier, more peaceful lives today than anytime in the past. Recognizing the enormous, positive effect of this gradual transformation is an important tonic to the narrative of pervasive problems and pessimism.

Most people are unaware that extreme poverty has been declining over time, despite its drastic reduction. In a recent survey, only 5 percent of Americans knew that the global extreme poverty had almost halved in the past 20 years. Two-thirds of respondents incorrectly thought it had doubled over that period.

If Americans were more aware of the stunning progress in reducing global poverty, perhaps they would be less pessimistic about the current situation or the outlook for the future.

As the figure below from the Our World in Data project shows, the reduction in extreme poverty on a global scale is recent. The default mode for much of human history was poverty with its associated problems. (For more on poverty under capitalism, see "Extreme Poverty Rates Plummet Under Capitalism.") 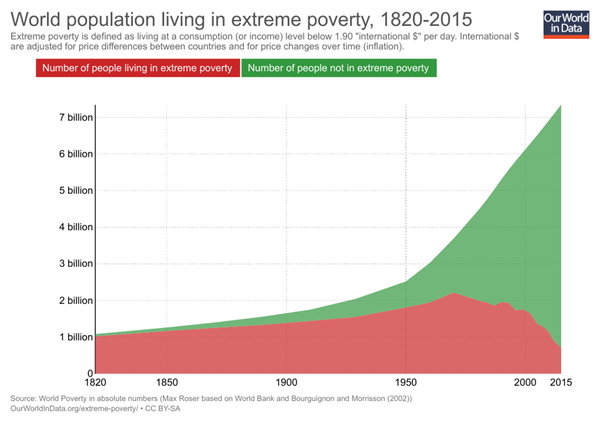 The UN’s project, World Poverty Clock, gives a real-time count of how many people have escaped poverty today. The portal also lets people see the different rates of progress by country and which ones are on pace to eliminate extreme poverty by 2030.

The rates of improvement vary by country. Some developed nations have all but eliminated this form of extreme destitution, while other countries such as India and China are making rapid improvements.

The steady climb out of poverty is the most important story taking place anywhere.

Africa remains an area with disappointing and unsteady progress. Some countries, such as Mauritania and Ethiopia, are on track to meet the goal of eliminating extreme poverty in by 2030. Unfortunately, many countries in Africa, such as the Democratic Republic of the Congo, are moving in the wrong direction, with more people falling into extreme poverty each day.

The expansion of economic freedom has coincided with the impressive reduction in global extreme poverty, and nations that have embraced economic freedom have seen substantial reduction in the share of people living in destitution. As the Economic Freedom of the World report from the Cato Institute shows, the most free countries have the lowest levels of poverty, while in the least free countries high levels of poverty persist. 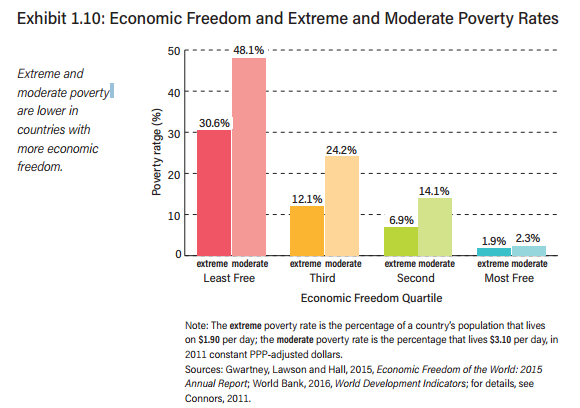 Still Too Many Are in Poverty

In some ways this steady climb out of poverty is the most important story taking place anywhere, and represents the biggest net benefit to the largest number of people of any development in modern history.

Too many countries are moving in the wrong direction.

Countries still have substantial room for improvement across a number of policy spheres and significant problems remain. Even with this progress, too many countries are moving in the wrong direction, reducing the scope of economic freedom and the resulting adverse consequences. At current rates more than five percent of the world’s population will still live in extreme poverty in 2030. That is a smaller share than today, but still far too many.

The drastic and rapid reduction in the world population of people in extreme poverty is something to be celebrated, and underscores how important it is to continue to spread policies that allow this great escape to occur.