The ten-year betting period is officially over now.

In 2007, Warren Buffett challenged finance professionals in the hedge fund industry to accept a bet that Buffett described in his 2016 letter to shareholders of Berkshire-Hathaway (see p. 21-21):

In Berkshire’s 2005 annual report, I argued that active investment management by professionals – in aggregate – would, over a period of years, underperform the returns achieved by rank amateurs who simply sat still. I explained that the massive fees levied by a variety of “helpers” would leave their clients – again in aggregate – worse off than if the amateurs simply invested in an unmanaged low-cost index fund.

Subsequently, I publicly offered to wager $500,000 that no investment pro could select a set of at least five hedge funds – wildly-popular and high-fee investing vehicles – that would, over an extended period, match the performance of an unmanaged S&P-500 index fund charging only token fees. I suggested a ten-year bet and named a low-cost Vanguard S&P fund as my contender. I then sat back and waited expectantly for a parade of fund managers – who could include their own fund as one of the five – to come forth and defend their occupation. After all, these managers urged others to bet billions on their abilities. Why should they fear putting a little of their own money on the line?

Specifically, Buffett offered to bet that over a ten-year period from January 1, 2008, to December 31, 2017, the S&P 500 index would outperform a portfolio of hedge funds when performance is measured on a basis net of fees, costs, and all expenses. Hedge fund manager Ted Seides of Protégé Partners accepted Buffett’s bet and identified five hedge funds that he predicted would out-perform the S&P 500 index over ten years.

As I reported last September on CD, Buffett’s now-famous bet was actually settled early and ahead of schedule, because the outcome was so one-sided in favor of the S&P 500 index over hedge funds:

The Oracle of Omaha once again has proven that Wall Street’s pricey investments are often a lousy deal. Warren Buffett made a $1 million bet at end of 2007 with hedge fund manager Ted Seides of Protégé Partners. Buffett wagered that a low-cost S&P 500 index fund would perform better than a group of Protégé’s hedge funds. Buffett’s index investment bet is so far ahead that Seides concedes the match, although it doesn’t officially end until Dec. 31.

“For all intents and purposes, the game is over. I lost,” Seides wrote. The $1 million will go to a Buffett charity, Girls Inc. of Omaha. In conceding defeat, Seides said the high investor fees charged by hedge funds was a critical factor. Hedge funds tend to be a good deal for the people who run the funds, who pass on big bills to the investors.

“Is running a hedge fund profitable? Yes. Hedge fund managers typically demand management fees of 2 percent of assets under management,” according to Capital Management Services Group (CMSG), which tracks the hedge fund industry. “Performance fees for managers can be 20 percent to 50 percent of trading profits,” CMSG adds. By contrast, the costs of an average index fund are minimal. A fund that tracks the S&P 500 fund might have an expense ratio of as little as 0.02%.

Now that the ten-year betting period is officially over (December 31, 2017), Yahoo Finance reported yesterday that “Warren Buffett has won his $1 million bet against the hedge fund industry“:

With 2017 over, Warren Buffett has sealed his victory over hedge funds in a bet he made a decade ago. The Berkshire Hathaway chairman in 2007 bet $1 million that the S&P 500 would outperform a selection of hedge funds over 10 years.

As of Friday, his S&P 500 index fund had compounded a 7.1% annual gain over that period. The basket of funds selected by Protégé Partners, the managers with whom he made the bet, had gained 2.1%, according to The Wall Street Journal. Buffett agreed to give the prize money to Girls Inc. of Omaha, Nebraska, a nonprofit he has previously supported.

Buffett has long taken issue with hedge funds‘ promise of outperforming the market and their high fees that take away from the returns their clients earn. He has turned out to be right on both fronts. Actively managed funds have seen outflows while passive funds have gained since the financial crisis. Meanwhile, an abundance of exchange-traded funds has made it cheaper and easier for investors to buy into just about any group of stocks. 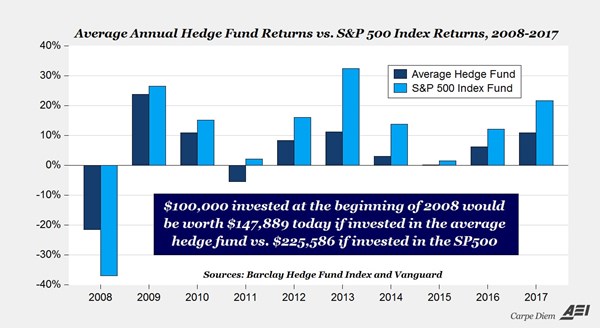 The chart above shows the annual returns on the S&P 500 index and the average annual returns on a comprehensive index of thousands of hedge funds maintained by Barclay over the period of Buffett’s bet: from January 2008 through December of 2017. A $100,000 investment at the beginning of 2008 would have more than doubled to about $225,586 at the end of last year, compared to only about $148,000 invested in the average hedge fund.

At least over the most recent ten-year period, Buffett’s investment advice (also from the 2016 letter to shareholders) has convincingly prevailed (emphasis added):

Costs skyrocket when large annual fees, large performance fees, and active trading costs are all added to the active investor’s equation. Funds of hedge funds accentuate this cost problem because their fees are superimposed on the large fees charged by the hedge funds in which the funds of funds are invested.

A number of smart people are involved in running hedge funds. But to a great extent their efforts are self-neutralizing, and their IQ will not overcome the costs they impose on investors. Investors, on average and over time, will do better with a low-cost index fund than with a group of funds of funds.