Assimilation is taking place at a more rapid rate

In my post last week, I demonstrated using surveys mostly from Gallup and Pew Research Center that Muslim Americans are rapidly abandoning beliefs widely held in their native countries and adopting the more liberal social and political beliefs of other Americans. But what’s even more remarkable about this fact is that this transition has occurred at the same time that Muslim immigration has ramped up. In other words, immigration is not detracting from those changes and may even be contributing to them.

While the number of Muslim immigrants and their children increased by nearly 60 percent from 2007 to 2015—from 1.7 million to 2.7 million—the native Muslim population actually fell by 10 percent—from about 658,000 to 594,000. This provides evidence that the immigrants themselves are taking part in the recent changes. 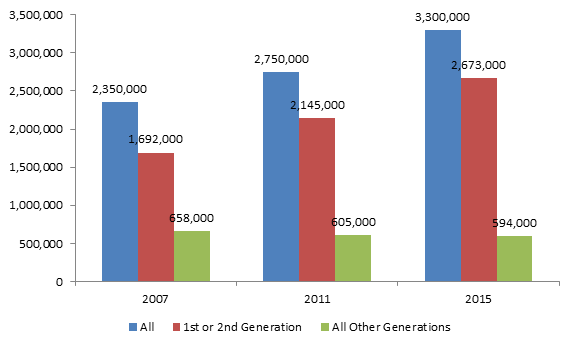 *Note that this figure and its corresponding numbers were updated. The earlier figure used the 2007 ratio of immigrants to natives from Pew’s religious landscape survey, which had a Muslim sample size in 2007 of only 111. The figure was updated with Pew’s Muslim specific survey from 2007 which had a sample size of 1,050 and had a lower proportion of native Muslims.

I’ll just give a couple of examples for which I have data for both 2007 and 2014. Figure 2 compares the rate of acceptance of homosexuality among Muslim immigrants and their children to the rate of acceptance among all Muslims, while also tracking the number of Muslim immigrants in the United States. Pew does not report the breakdown of acceptance of homosexuality by nativity in 2014, but as Figure 2 shows, their views tracked the changes in those for all Muslims in 2007 and 2011—a 12 percent increase for both.

Figure 2: Percent of U.S. Muslims who find homosexuality “morally acceptable” and number of 1st or 2nd generation Muslims in the United States 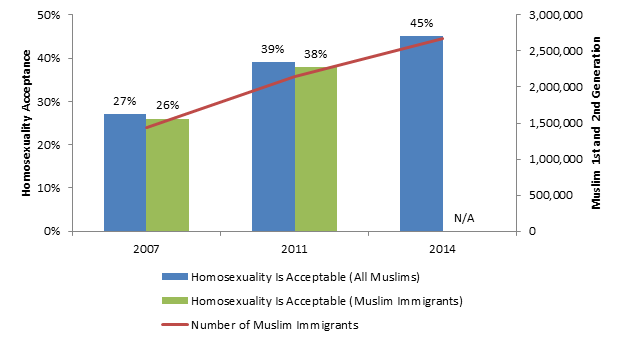 Given this departure from the strict reading of the Quran, we would expect that many Muslims in the United States may have adjusted their views on Islam’s scripture. Pew found in 2007 that 50 percent of U.S. Muslims favored taking a “literal” interpretation of the holy book, while 33 percent opposed doing so. By 2014, the literalists had dropped 8 points, and the non-literalists rose 10 points, as seen in Figure 2.

Figure 3: Percent of U.S. Muslims who say that the Quran should not be taken literally and number of 1st or 2nd generation Muslims 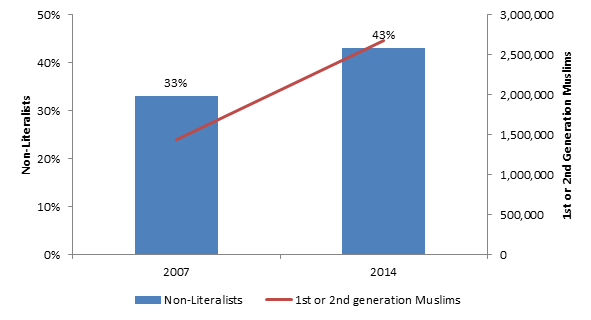 Here’s another significant point of equal significance: these changes do not include those who abandoned Islam, and it’s safe to assume that these are the people who are likely to be the most liberal. Thus, these surveys probably underrepresent the level of liberalization among people who were raised Muslim or among immigrants who first arrived in the country as Muslim because it excludes those people who defected from the faith in adulthood or after their arrival in the United States.

This phenomenon is very significant. In 2014, 23 percent of all U.S. residents raised in Muslim households had left their religion, according to Pew. Another estimate placed the share at 32 percent. Two small surveys found that the number of Iranian Americans who identify as Muslim dropped from 42 percent to 31 percent from 2008 to 2012. Based on Pew’s 2011 survey of Muslims in America, this number may actually be at the high end—using American Community Survey Data, its numbers imply that the actual share is more likely about 22 percent. Estimates of the effect of “Muslim” immigration on the religious or political makeup of the United States would be highly misleading if they ignored this group.

The bottom line is that very large increases in the Muslim population in the United States due to immigration have not stalled assimilation of those immigrants. Rather, they are demonstrating Americans’ incredible capacity to encourage immigrants to adopt their ways.