US Economic Liberty Has Been Sinking for Sixteen Years

When Economic Freedom of the World is released every September, it’s like an early Christmas present. This comprehensive yearly publication is a great summary of whether nations have policies that allow people economic liberty.

I eagerly peruse this annual survey every year (here’s what I wrote in 2015 and 2014 if you’re curious about a couple of recent examples). And this year is no different.

Let’s start with the table that gets the most attention. Here’s a look at the top nations, led (as is almost always the case) by Hong Kong and Singapore. Switzerland also deserves some recognition since it has always been in the top 5. 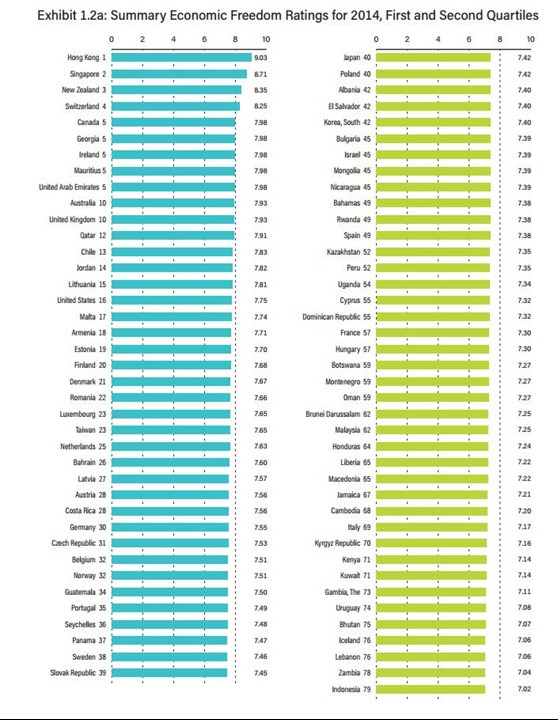 The United States used to be a regular member of the top-5 club, but we have fallen to 16th in the rankings.

Which is just barely ahead of the supposedly socialist countries of Finland and Denmark (which actually are very market-oriented nations in every area other than fiscal policy).

I don’t show the nations in the bottom half of the rankings, but I assume nobody will be surprised to learn that Venezuela is in last place (though, to be fair, the communist hellholes of North Korea and Cuba aren’t in the rankings because of inadequate data).

One of the other great features of Economic Freedom of the World is that you can look not just how nations rank today, but also how the have changed over time.

I selected some nations of interest from Exhibit 1.4 in Chapter 1. Keep in mind, as you review this data, that you’re seeing scores every fifth year from 1970-2005 and then the annual scores beginning in 2005. 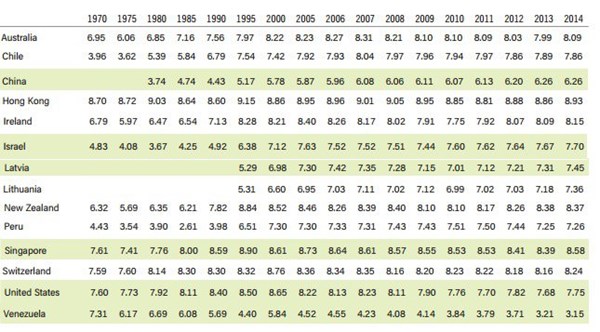 A few observations on these numbers.

I’ve been grousing for years that the Bush-Obama policies have eroded America’s competitiveness and undermined economic liberty.

This year, EFW has a special chapter on the United States and it confirms my analysis. Here’s a chart from that chapter showing how America’s score has declined in recent years. 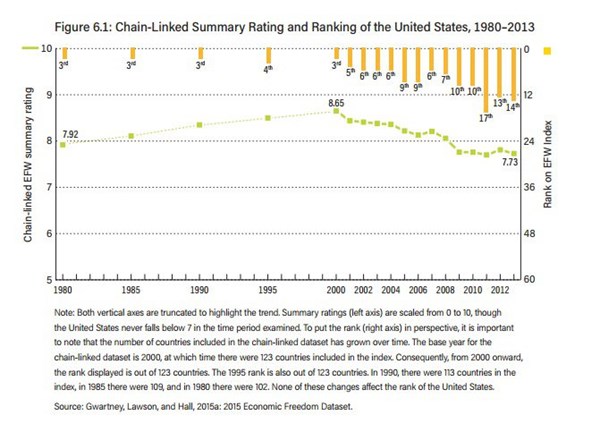 And if you want some additional details, America’s score is declining first and foremost because the rule of law is eroding and property rights are less secure.

Which is a point I made last year, but EFW‘s chart is much better than my homemade version. 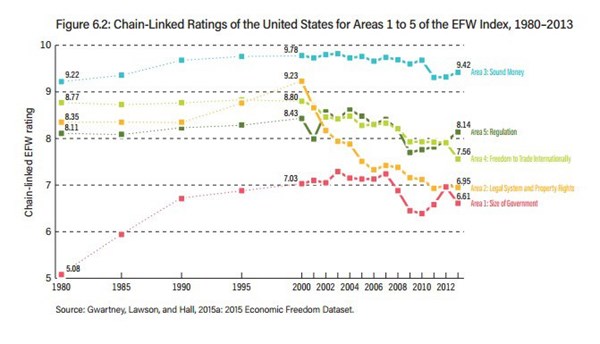 You can also see that protectionism has increased since 2000. And one shudders to think what will happen in this area over the next few years given the protectionist utterances of Donald Trump and Hillary Clinton (though I hope Hillary is lying and trade is an issue where she’s actually on the right side).

It’s almost as if the two major-party candidates have read the recipe for growth and prosperity and have decided to use it as a road map of what not to do. Sigh.