Tough on Immigration Is Tough on Economic Growth

Not to be outdone by Arizona’s tough immigration law of 2010, Alabama and Georgia legislators passed their own immigration bills in 2011. The bills received a great deal of media attention because they were widely touted as good for growth and job creation, and were harsher on illegal immigrants than Arizona’s law. In a New York Times article, for example, Alabama State Rep. Micky Hammon, a coauthor of his state’s law, called it “a jobs-creation bill for Americans.” Georgia State Rep. Matt Ramsey said after his state’s bill passed: “It’s a great day for Georgia. We think we have done our job that our constituents asked us to do to address the costs and the social consequences that have been visited upon our state by the federal government’s failure to secure our nation’s borders.”

Georgia’s law requires private and government employers to use E-Verify, a federal program, to ensure that workers are eligible to work in the United States. The law also increased the penalties for using fake documents to obtain jobs; offenders now face up to 15 years in prison and $250,000 in fines. Moreover, the law makes it a criminal offense to intentionally transport or harbor illegal immigrants, authorizes local and state law enforcement officials to arrest illegal immigrants and house them in state and federal jails, and requires documentation verifying legal status before people can apply for food stamps or government housing.

Alabama’s law goes even further than Georgia’s. It not only clamps down on illegal immigration, it also prevents illegal immigrants already in the state from establishing themselves. The law requires public schools to verify students’ residency status with birth certificates, bans illegal immigrants from state colleges, and outlaws transporting, harboring, employing, or renting property to undocumented immigrants. The bill also requires law enforcement officers to detain and investigate anyone they reasonably suspect is an illegal.

Opposition to the new laws emerged immediately in both states. In Alabama, churches and charities thought the wording so stringent that they worried about being implicated simply for ministering to illegal immigrants. Episcopal, Methodist, and Catholic church officials in Alabama sued Governor Robert Bentley and Attorney General Luther Strange. The American Civil Liberties Union (ACLU) of Alabama and Georgia, as well as other civil liberties advocacy groups, like the Southern Poverty Law Center, also brought forward lawsuits because the new law will likely result in racial profiling.

While the specific methods of implementation for Alabama’s and Georgia’s immigration laws could be altered in the hope of minimizing their social consequences by, for example, randomly checking people for citizenship instead of profiling people who look different or out of place, the negative economic results cannot be avoided or minimized unless the laws are ignored. New business paperwork, law enforcement, and incarceration will impose steep costs. All industries will suffer some negative effects, and the fortunes of a number of industries, such as agriculture, restaurants, landscaping, catfish and poultry processing, and construction, will be seriously compromised. Jeffrey Passel estimated in a 2006 study that across the nation, illegal immigrants make up 24 percent of the agricultural workforce, 17 percent of the cleaning industry workforce, 14 percent of the construction workforce, 12 percent of the food preparation workforce, and 9 percent of the production workforce.

The effects of the new laws are already being felt throughout the agricultural industry in both states. Illegal immigrants are now so afraid of imprisonment and deportation that they have stopped supplying their labor during harvest seasons. And it’s not just illegals who are fleeing the state. Green-card carrying immigrants also quit their jobs in protest and are leaving Alabama.

Alabama Live reports that central Alabama farmers requested an emergency suspension of the law because millions of dollars of crops were at risk of not being harvested due to labor shortages. In the Wall Street Journal, Alabama Deputy Commissioner for Agriculture and Industry Brett Hall was quoted saying: “We have a big problem on our hands. . . . [F]armers and business people could go under.” Economists say the law will hurt Alabama’s economy, but politicians such as State Sen. Scott Beason (a Republican) called their arguments “absolutely, positively wrong”. He also called the Alabama law “the biggest jobs program for Alabamians that has ever been passed.”

Meanwhile Jay Bookman of the Atlanta Journal-Constitution reports that Georgia’s law has already caused a severe enough labor shortage that farmers are at risk of leaving up to $300 million of crops rotting in their fields.

The construction industry, which has relied on immigrants in recent years, is also being hit hard. Despite the remaining slack from the housing crisis, delays in Alabama and Georgia are common. Nowhere is the story more tragic than in Tuscaloosa, Alabama, where residents and businesses downtown were hit by a tornado last April. Cheap, efficient labor was desperately needed. Yet reconstruction in Tuscaloosa has been slow and has lagged behind Joplin, Missouri, which was hit with a much more severe tornado a month later. While some of the delays in Tuscaloosa can be blamed on red tape, the harsh immigration law certainly has not helped matters.

Despite politicians’ ill-informed rhetoric and pro-law rallies by Tea Party groups, the economics of the issue remain unambiguous: Immigration, whether legal or illegal, is a net general benefit for the people of a state or country. The argument is an easy extension of David Ricardo’s argument for free trade; blocking immigration hampers the free operation of an economy in much the same way that blocking trade does. It prevents resources, including labor, from being reallocated to those industries and locations where consumers most urgently want them.

The evidence shows that immigration does not take away jobs or even decrease wages for native workers. Julian Simon  in a 1995 study found that immigration does not increase unemployment for U.S. citizens, even among minority and low-skilled workers. George Borjas and Lawrence Katz, in a study published in 2007, found that the only group adversely affected by immigration in the United States was high school dropouts, who saw a long-run 4.8 percent reduction in wages.

Borjas and Katz assumed that immigrant and native workforces do the same work, an assumption that does not bear out empirically. Even with that assumption, however, Borjas in 2008 estimated the net economic gain to native workers from immigration to be around $22 billion annually. When Gianmarco I. P. Ottavanio and Giovanni Peri corrected for this assumption in a 2006 study, they found immigration actually increased natives’ wages in the short and long runs because immigrants complement the native workforce.

As coauthor Luke points out from his farm experience, Americans usually don’t want the jobs that immigrants are willing to take. 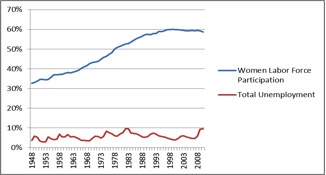 The number of jobs in an economy is unlimited because our wants are unlimited. The more people working, the further down our list of wants we can get. Moreover, the more people working, the more potential customers—and hence business opportunities—we have. Immigrants buy or rent houses, purchase food and goods, and dine at restaurants. This is why the United States did not suffer mass unemployment as our population drastically increased over the last few decades, and why there wasn’t a jump in unemployment when women joined the labor force. (See graph.)

Another common argument for the Alabama and Georgia laws is that immigrants will flood U.S. cities beyond capacity in search of higher living standards. If people migrated en masse to those areas with the highest wage rates, one may wonder why all U.S. citizens don’t flood Malibu, California. The reason is that real estate values adjust upward to act as a natural brake on migration. In addition, while there is much need for immigrant labor in the United States, workers will come here only as long as the expected wage exceeds their domestic wages plus the costs of relocating. As more immigrants resettle, the relevant wage will drop, decreasing their main incentive for coming in the first place.

A third justification for legal restrictions is to prevent immigrants from living off government programs. Anyone concerned about this should ask why the Alabama, Arizona, and Georgia laws focus almost all enforcement efforts on preventing immigrants from working. Although immigration laws have provided strong incentives for immigrants not to work, Simon’s 1995 study calculated that on net they paid more into government programs than they took out.

The justifications for Alabama’s and Georgia’s laws fail to pass the test of basic economics. Not only do these laws not bode well for the economy, they also tar the civil rights images of two states that historically have suffered poor reputations in that department. In a country founded on open immigration and the basic freedom of human association and commerce, laws of this nature are a travesty.

Daniel J. Smith is an Associate Professor of Economics at and the Associate Director of the Johnson Center at Troy University. He is a member of the FEE Faculty Network.