Those who do not know history are doomed to repeat it. 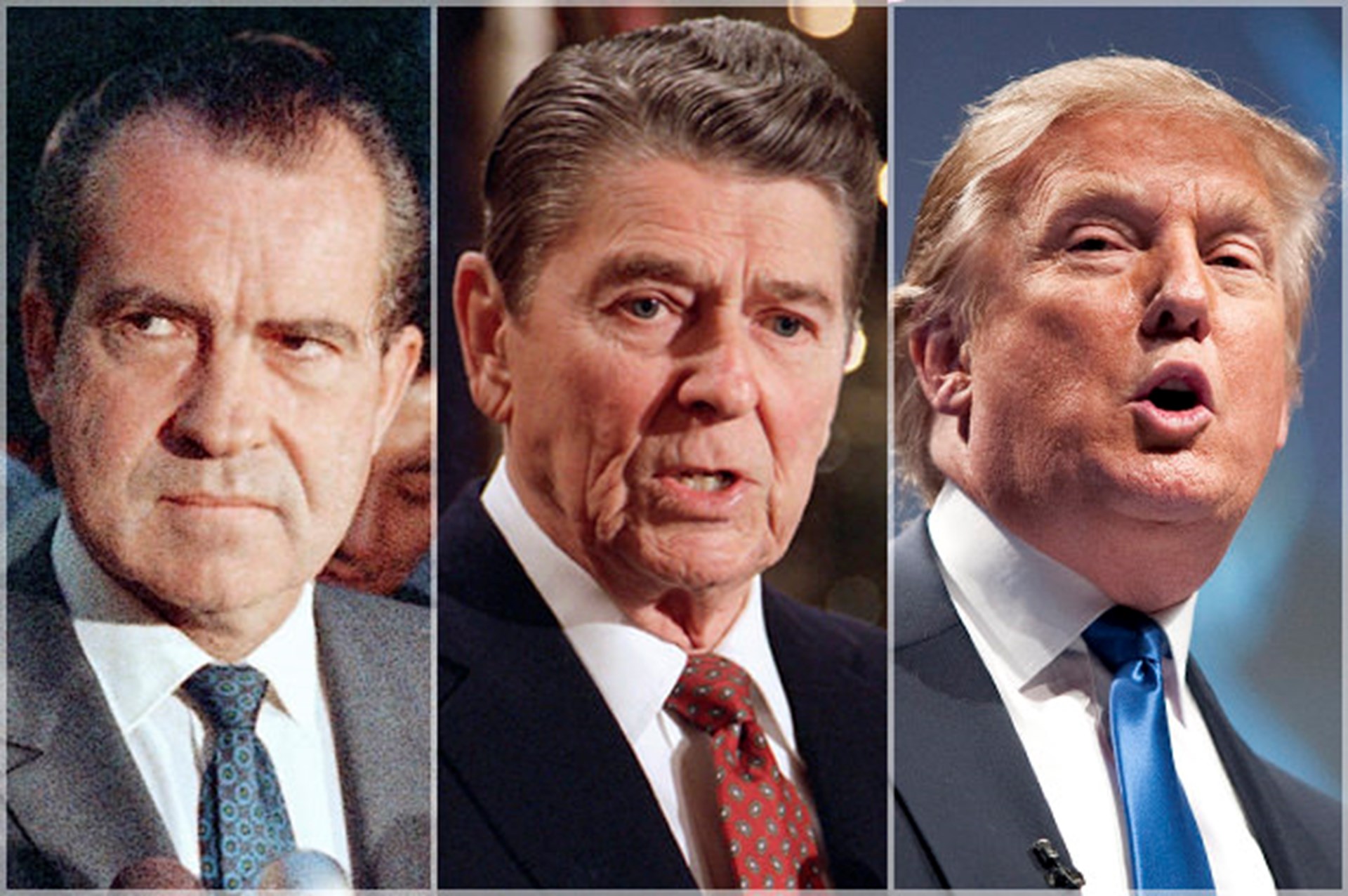 He appealed directly to white Southerners and ethnic working-class Northerners, largely ignoring the left-leaning media, academia, and racial minorities. And he imposed a 10% tariff on imports.

Nixon took office in 1969, at a time when many working-class Americans were fed up with the policies of the previous president, Democrat Lyndon Johnson, whom they blamed for the economic doldrums, unbridled social-welfare spending, the rise of hippies and leftist radicals, and too much focus on racial minorities instead of the white “Silent Majority.”

How well did Nixon and Reagan work out for white working men? Not well. Trump will also not work out well for them.Then when Republican Ronald Reagan ran for the presidency in 1980, he appealed to the same voters Nixon did, but also to a wider number of Catholics and Evangelicals, due to his political mastery of blending nationalism with Christianity. His predecessor, Democrat Jimmy Carter, though a populist Evangelical, was seen by working Americans as ineffectual in economic matters and foreign affairs, as Barack Obama would later be seen, deservedly or undeservedly, depending on one’s party affiliation.

Reagan won in part because white working men were angry over plant closures, the loss of union power as industry moved to right-to-work states, a shift in the labor market from factory work requiring muscles to office work requiring a feminine tolerance for paper-pushing, and a fear, somewhat unwarranted, of a foreign nation (the Soviet Union).

How did Nixon and Reagan work out for white working men?

Trump also will not work out well for them, assuming that he isn’t impeached before he can cause real damage by trying to run the economy and foreign relations as if he were a petulant hotel manager who puts guests he doesn’t like in rooms next to an elevator or ice machine.

Let’s go back to Nixon to put Trump in historical context.

Partly for geopolitical reasons and partly to open up China’s markets to the USA, Nixon visited Communist China and initiated a Sino-American rapprochement, to the consternation of the Soviets. It was one prong in a multi-prong strategy to make the world interconnected economically through global trade and the advancement of capitalism, with the USA being the chief beneficiary – or so it was thought at the time.

At the same time, Nixon greatly expanded the social-welfare state and the regulatory state. During his administration, spending doubled on food stamps, ADFC, and other welfare programs. As a result, the budget for the Department of Health, Education, and Welfare would surpass the Pentagon’s budget. New bureaucracies were born, including the Environmental Protection Agency, the Occupational Safety and Health Administration, the National Oceanic and Nixon greatly expanded the social-welfare state and the regulatory state. But these weren't his biggest impact on the economy for generations to come.Atmospheric Administration, and the public-private passenger railroad of Amtrak. Nixon also increased spending on urban renewal, consumer protection, and the arts. And he pushed for desegregation, affirmative action, the Equal Rights Amendment, and health maintenance organizations (HMOs). And to top it off, Nixon instituted wage and price controls in a futile attempt to reduce inflation.

But taken together, these initiatives weren’t Nixon’s biggest impact on the economy for generations to come. Instead, that would be his ending of the Bretton Woods monetary agreement and the closing of the gold window. These two actions totally disconnected the dollar from gold, allowed the dollar to float, and facilitated deficit spending and the financialization of the economy. As historical charts of deficit spending show, deficits began accelerating in 1972 and, like a spacecraft in the vacuum of space, never slowed to return to their normal economic orbit.

Coincidence or not, real wages began going in the opposite direction by the end of the 1970s, especially for the working class. As Walter A. McDougall says, this was also the decade “when the US empire of production metamorphosed into an empire of consumption.”

An aside: McDougall is the author of a fascinating book, The Tragedy of US Foreign Policy: How America’s Civil Religion Betrayed the National Interest. McDougall details how America was transformed from a republic into an empire by an unquestioned faith in American exceptionalism and the corresponding belief that it would be easy and welcomed to export its civil religion of capitalism, democracy and Judea/Christian God to other countries and cultures. He also details what happened with the domestic economy and politics during the transformation. Some of the information for this commentary comes from the book.

Carter had been endorsed by labor unions in 1976, thinking that he would establish an industrial policy that would stop the decline of manufacturing. He never did, due to being hamstrung by high inflation and the Federal Reserve, which chose to deal with inflation on behalf of American and foreign banks instead of working stiffs. Carter’s reputation was further tarnished by the Arab oil embargo and the Iranian hostage ordeal.

Where Carter was gloomy about American prospects, Reagan was sunny. As presidential candidate Donald Trump would do in 2016, Reagan vowed to make America great again but didn’t use those exact words. He spoke of the shining city on a hill as he increased military spending and speeded the inevitable collapse of the Soviet Union. By 1983, inflation had come down to 3.2%, due to the courage of Reagan and Fed Chairman Paul Volker in letting unemployment rise temporarily. As a result, the economy took off and the stock market skyrocketed. Reagan was helped by cash-rich Arabs and Japanese, who subsidized American consumer spending by buying US Treasury bonds.

The foolish and suicidal embrace of deficits pervaded every administration after Reagan and seems to have infected President, née Hotel Manager, Donald Trump.But this didn’t staunch the loss of manufacturing jobs or revitalize the white working class. Income inequality increased on Reagan’s watch, and union membership fell. During his second term, Reagan launched the Uruguay Round of trade agreements to expand global trade from just manufacturing, produce and commodities to also capital, services, and intellectual property. A proponent of immigration, he also granted amnesty to illegal immigrants.

Reagan’s most lasting legacy was reinforcing the economic malarkey that deficits don’t matter – that Americans could have guns and butter and bread and circuses without paying for them with higher taxes, or higher productivity, or by working harder and longer. Likewise, Americans were later led to believe that the USA could afford to continue to export its civil religion to other countries, by attempting nation-building in such hellholes as Afghanistan, Iraq, and Libya.

The foolish and suicidal embrace of deficits pervaded every administration after Reagan and seems to have infected President, née Hotel Manager, Donald Trump, who ran his hotels, condos, and casinos the same way – on a lot of debt as well as periodic bankruptcies. Trump plans to increase military and infrastructure spending without an apparent concern for the impact on the national debt, which will become even more of straitjacket on the economy if interest rates tick up. At the same time, he is making enemies around the world and risking a trade war or shooting war.

The cold fact is that manufacturing employment is only about 8% of total US employment and has fallen in most developed countries as a percent of their total employment, due largely to automation and robotics. (I worked in manufacturing most of my career.) And manufacturing output accounts for only about 12% of US GDP. It’s delusional to think that American manufacturing is going to come back in a big way, regardless of how many tariffs Trump puts in place or how many manufacturing executives he flogs in the public square. Serious people need to look at this problem seriously instead of letting populists, nationalists, and economic ignoramuses control the civil discourse. Otherwise, the nation is on a collision course with economic, fiscal, geopolitical, and demographic realities.

Is Trump the man to avoid the collision? Let me answer this way: he doesn’t have the strategic thinking and political savvy of Nixon or the charisma and political skills of Reagan. But he does have a dark side that is similar to Nixon’s dark side – that is, a thin skin, vindictiveness, and vulgarity towards real and imagined enemies. In other words, brace yourself for a collision.

Republished from the Libertarian Institute.