This Airport Abuses Uber and Lyft Drivers and Their Customers

They took a perfectly good emerging market and turned it into a total mess for everyone.

There I sat in the backseat of the Honda at the Atlanta airport, my Puerto Rican driver ready to drive me home. He has a full-time job, so this job with Lyft is just a side gig he does on Sundays to help make ends meet.

As a passenger in the back seat, I assumed that I couldn’t get in trouble for mouthing off at the officer doing the shakedown.  What was happening now he had never before experienced. Just as we were about to leave, an airport cop demanded to see his special permit for picking up from the airport. He didn’t know he needed one. So there we sat for 15 minutes, while the big shot sauntered back and forth to his patrol car, taking his own sweet time to write him a ticket.

This ticket–which is labeled an “arrest citation”–cannot be paid online or through the mail. The cop explained that it has to be paid at the courthouse and can only be cleared once he presents his newly purchased permit. If he doesn’t show, there will be a warrant issued for his arrest. He will go to jail. 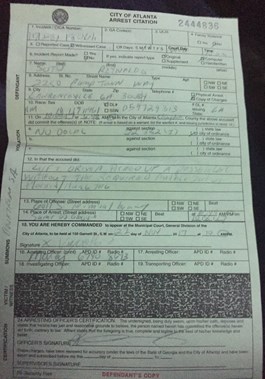 So he will have to take off work, get the permit from the city, slog over to the courthouse where parking is ungodly expensive, stand in line, and pay the fine of some amount. I’m just estimating that the cost of all this was to exceed $100. With that in mind, I tipped the nice man very heavily.

As a passenger in the back seat, I assumed that I couldn’t get in trouble for mouthing off at the officer doing the shakedown. So I took the opportunity to explain to him how he was pillaging a good man, inconveniencing customers, and disgracing the city of Atlanta. That felt good.

But the entire situation was truly sad. It’s clear what is happening here. Airport authorities have cobbled together a series of small steps to squeeze ridesharing services in order to diminish it or eliminate it altogether. The long period of tolerance is at an end, but rather than making it illegal, the airport is trying to generate as much misery as possible.

It seems like the situation gets worse every time I try to grab a car from the airport.

This permit nonsense is naked robbery (I’ve yet to discover how much one costs, despite all the Googling). But it’s only the beginning. Picking up from the airport requires also paying a $3.80 surcharge for each ride, seriously diminishing the profitability of picking up anyone at all. Airport authorities are clearly there to discourage drivers from serving consumers, thus leaving customers at the mercy of municipal taxis and public transit.

There is also a new system of using dispatchers. What in the world would they do? Software handles all this. The answer is that they don’t do anything. They meander around, waving their arms, asking questions, spying on the process, and generally introducing confusion.

What had previously been a system of benign neglect began to turn.  The whole scene is amazing. Two years ago, ridesharing at the Atlanta airport was perfect. It was being widely used. It was cheap and convenient. Customers were king. Drivers were making money. Poor people without jobs suddenly had a job.

But here is what happened for Atlanta residents: We stopped driving to the airport, parking, and paying $10 per day while gone from town. We all realized that it was far cheaper to call Lyft and Uber.

Suddenly, the airport authorities had a problem. They had previously constructed vast parking lots for people coming and going from the airport. They had been a huge source of revenue. That revenue gradually began to fall. Then it fell some more.

What had previously been a system of benign neglect began to turn. There was the new surcharge. There was the special permit and the harassment of drivers. The moving and codification of the pickup spot.

Put it all together, and what you have here is a hot war against ridesharing. And to what end? Everyone knows: to get more money for the airport authority and preserve the status quo against innovation. It’s pretty simple at this point. But at what cost? Every Atlanta resident suffers. Visitors to the city get the impression that we are a reactionary city, afraid of progress. Poor people in Atlanta are denied an awesome job. People are discouraged from using nights and weekends to earn a few extra bucks.

No one wins but authorities. And what’s particularly annoying is how the enforcement agents act as if they are somehow helping to enforce an orderly transportation system. They took a perfectly good emerging market and turned it into a total mess for everyone.

My nice driver, who barely speaks English, is right now considering how he will navigate this labyrinthine bureaucracy that will steal profits from a full day’s work. And he will wonder why he bothered to begin with. And he will wonder–like all of us–what is happening in this land of the free.