There Really Were Health Nazis

Hitler despised smoking and used the power of the state to stop it.

Many smokers these days poke fun at the crusaders of the anti-tobacco lobby as "health nazis.” The comparison is related to the extreme and authoritarian nature of national socialism. Tobacco control campaigners have tried, including through academic studies, to brand this Nazi-rhetoric as a fallacy.

However, the Nazis were largely ahead of their time when it came to regulations regarding tobacco use.

The Third Reich decided on bans on smoking in public spaces, bans on advertising, and restrictions on tobacco rations for women, making it then the most restrictive country in the world. Bans on women smoking, which was socially unacceptable throughout most of the 20th century, was even enforced through policing.

By the end of the 19th century, the small and thin paper-rolled tobacco sticks were cheap and easy to consume, yet there was a considerable stigma against them. In the United States, groups such as the Clean Living movement lobbied heavily for tobacco-bans. They associated cigarettes with excessive alcohol consumption and pornography. Their campaigns claimed eliminating the evils of alcohol, tobacco, and pornography would return traditional family values and lead to a prosperous era free from crime.

This movement was nourished by works such as the 1798 book Observations Upon the Influence of the Habitual Use of Tobacco Upon Health, Morals and Property by none other than Benjamin Rush. “A man who takes a pinch of snuff every fifteen minutes in four and twenty,” he wrote, “will waste about five whole days of every year of his life in this useless, and unwholesome practice.”

In the 1830's, the anti-tobacco movement picked up simultaneously with the first calls for alcohol prohibition.

It is indeed stunning how the national socialists in the 1930s and 1940s had considerably more impact than the Clean Living movements in the United States.

A duty to remain healthy 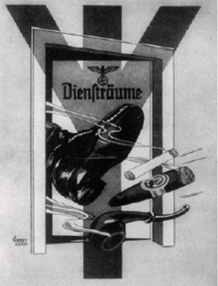 The Nazis displayed posters saying "You have the duty to remain healthy," especially intended for the upcoming generation through the regime's Hitler Youth. Public health campaigns against smoking were common. It turns out that Adolf Hitler, himself a convinced non-smoker, funded studies showing the dangers of smoking with his own money.

Compared to the German killjoys, Camel promoted a very different image in the US.

At the beginning of the war, the Nazi regime had prohibited soldiers from smoking during rallies and minors smoking in the streets and public places. The Führer remained the role model for this legislation. As one party newspaper stated, “Brother national socialist, do you know that your Führer is against smoking and thinks that every German is responsible to the whole people for all his deeds and missions, and does not have the right to damage his body with drugs?” 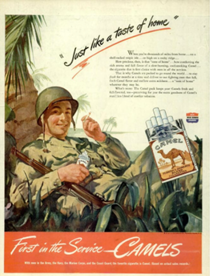 The national socialist dogma also was only protective of the health of 'chosen people', meaning Aryan Germans.  Adolf Hitler reportedly threw his last cigarette into the Donau river and never touched it again. In 1942, Hitler said: "I am convinced that if I had been a smoker, I would never have been able to withstand the troubles that have burdened me for so long. Perhaps, this is what the German people owe their salvation to."

After the end of the Nazi regime, cigarettes were on the rise: the industry even encouraged women to start smoking, despite men still not fully on board with the sight of a woman picking up a cigarette. With the liberation of Europe, the lifestyle regulations had fallen, and it was only until the end of the 20th century that anti-tobacco movements had gotten a footing again.

It is, however, true that the Nazis had considerably reduced the smoking rate during their reign. The consumption of cigarettes in Nazi Germany in the 1930s and 1940s was only a third of that of the United States. However, this is not accounting for the fact that despite the measures put in place by the government, daily cigarette consumption doubled between 1930 and 1940, and also does not count the illicit trade of counterfeit tobacco.

It turns out that not even being a Nazi makes people listen to your health legislation.

Does this make modern-day advocates of this lifestyle Nazis? Hardly. It takes more to be a Nazi, and it is indeed true the community of people who oppose further tobacco control doesn't do itself a favor by using Nazi rhetoric to advance its goals. There are far more effective ways of arguing against tobacco legislation.

However, the Nazis' tobacco regulations failed, and so will the anti-smoking lobby of today. Lifestyle regulations fail because people hold on to their habits regardless of government bans. All it does is create a dangerous black market and infringe on the right of self-determination of individuals.