Plain Packaging Is Bad for Your Health

Countries like France have already started to vastly infantilise individuals on numerous issues, for instance through legislating a very long spoken or written warning message on every ad praising salty or sugary foods.

From 2017 on, all cigarette packs in my host-country France have to be sold in the format of the so-called “neutral pack.” This implies that the pack will have the brand name in a neutral font, a colourless pack, and even bigger warning labels and shocking pictures of tobacco-derived diseases. This government measure mostly intends to discourage young people from smoking, but it fails to do so. It actually does quite the opposite.

The lead example for the plain packaging proponents and those who generally favour tough restrictions on tobacco is Australia. The country has very high taxes on tobacco, heavily regulates smoking in public areas, and in 2012, it became the first country worldwide to make plain packaging for cigarettes compulsory.

At the Department of Economics at the University of Zurich in Switzerland, a 2014 study analysed the (possible) effects of plain packaging on the smoking prevalence of minors in Australia, and clearly showed that for young people between the age of 14 and 17, the neutral packaging had absolutely no effects on their consumption:

Altogether, we have applied quite liberal inference techniques, that is, our analysis, if anything, is slightly biased in favor of finding a statistically significant (negative) effect of plain packaging on smoking prevalence of Australians aged 14 to 17 years. Nevertheless, no such evidence has been discovered. More conservative statistical inference methods would only reinforce this conclusion.

When it comes to adults, we have got to realise that we are constantly confronted with advertising on a weekly, daily, and hourly basis. Not to say that advertisement is without effect, because it clearly is not; but you tend to develop a certain kind of neutrality to it, since the mere quantity of ads hitting you is so immense. These companies trying to sell you their goods come up with ever more extravagant and new ways to make it entertaining: you’re being bombarded via mail, email, before watching a video online, while watching a video online, on Facebook, Twitter, on TV, radio, and so on and so forth.

The colouring and fonts of the different cigarette brands is the only marketing power tobacco companies have today.Knowing all this, there still remains a political class that sincerely believes that the mere fact that there are coloured packages (of which half the pack is already covered in horrible warning labels) behind the counter at your local newspaper stand will make you buy them, and not your interest in tobacco in itself. Someone should tell Coca-Cola that running ads is pointless – just put your cans behind the counter.

This point of view is nothing but infantilising. Let’s be real, the information of the effects of tobacco are out there, they are not an untold mystery. Everything from here is pure Nanny-State logic: the same one that is used to tell people what to eat, drink, and how to live their lives in general.

Here’s Where It Gets Dangerous

Dictating to tobacco companies how to market their franchise is one thing, given the situation of tobacco regulation today, but this government intervention goes too far. The colouring and fonts of the different cigarette brands is the only marketing power tobacco companies have today, since most countries ban advertisement. Adding this to the fact that in the same countries, smoking in most public places (and private places such as bars, nightclubs and restaurants) is banned, and 75% of every pack these days goes to taxes, are we really to believe that big tobacco deserve no margin of marketing whatsoever?

Neutralising marketing goes further than the measures that are already in place will make the black market thrive: between mid-2011 and mid-2013, Australia has seen a 60% increase in cigarette counterfeiting. The same effect is seen in the United Kingdom, where counterfeiting tobacco brands generates 45 million pounds (almost 55 million dollars) a year. These fake products bear enormous risks, as an inquiry for The Sun finds:

Independent lab analysis carried out for The Sun later revealed one pack of
his [the dealer they got the product from] cigs contained insect droppings, eggs, skin, mites, “unknown organic matter” and a stone.

Countries like France have already started to vastly infantilise individuals on numerous issues, for instance through legislating a very long spoken or written warning message on every ad praising salty or sugary foods. This aspect of big government legislating behaviour will only be increasing, if it is not opposed by responsible and liberty-minded individuals and groups. The movement of European Students for Liberty is confronting the Nanny-State with the #NoNanny campaign, by handing out neutrally packed chocolate bars with the label WARNING: Chocolate seriously increases your risk of obesity. 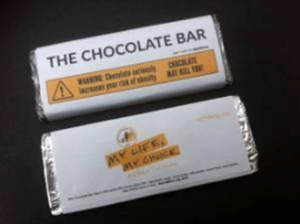