The US Is Once Again the World’s Most Competitive Economy

This top score is mostly due to our market efficiency and innovation environment.

I’m glad the United States is now ranked #1 in the World Economic Forum’s Global Competitiveness Report, though I point out in this interview that Trump’s performance is mostly a net wash.

His sensible approach to tax and regulation is offset by his weak approach to spending and his problematic view of monetary policy.

I’m embarrassed to admit that I forget to mention protectionism as another area where Trump is pushing in the wrong direction.

But let’s not focus on Trump. Instead, let’s take a closer look at the new data from the World Economic Forum.

We’ll start with a look at the top 20. You’ll see some familiar jurisdictions—places that always get good grades, such as Singapore, Switzerland, and Hong Kong. 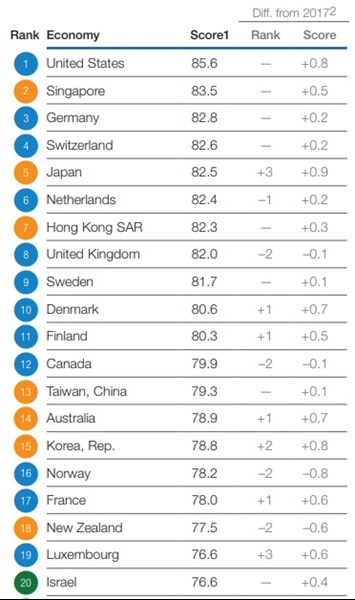 But you’ll also notice that there are several European welfare states with very good scores.

That’s because the GCR—unlike Economic Freedom of the World or the Index of Economic Freedom—does not rank nations based on economic policy. It’s more a measure of the business environment.

But since good policy tends to create a good business environment, there is a connection. Nations such as Germany and the Netherlands, as well as Scandinavian countries, have big welfare states. But the damage of those policies is offset by a very laissez-faire approach to businesses, so the big companies that help put together the GCR understandably give those places good scores.

By the way, it’s also worth mentioning that the 2018 edition uses a revised methodology. And based on this new approach, the United States retroactively gets the top score for 2017, as well.

All that being said, does it matter if a nation is ranked higher rather than lower?

Based on this strong relationship between competitiveness scores and economic output, the answer is yes. 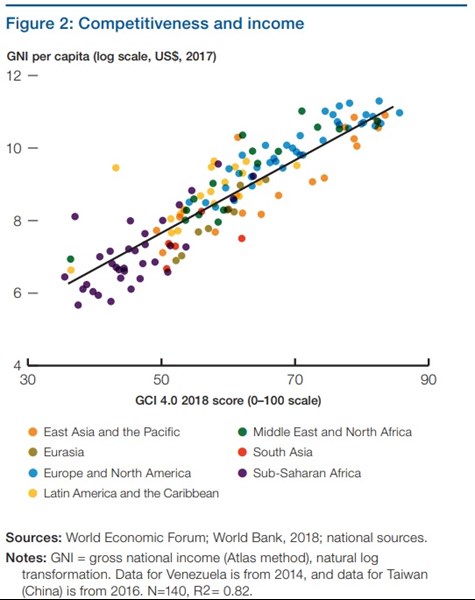 The bottom line is that there’s a very meaningful link between economic liberty and national prosperity.

The Market at Work

Now let’s take a closer look at the scores for the United States. As you can see, our top score is mostly due to our market efficiency and innovation environment. 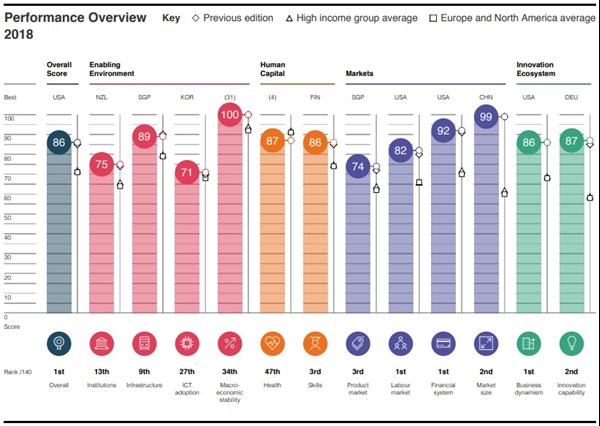 For what it’s worth, I don’t fully agree with the report’s methodology, but that’s mostly because I prefer to look at the degree of economic liberty rather than whether a nation is business-friendly. There’s an overlap, of course, but it’s nonetheless important to distinguish between pro-market and pro-business.

In any event, here are a couple of additional findings that caught my eye: