The UN insists that the US is mired in poverty, but their report is full of deception and bad data.

When writing about the statist agenda of international bureaucracies, I generally focus my attention on the International Monetary Fund and the Organization for Economic Cooperation and Development.

Today, let’s give some attention to the United Nations.

Based on this story from the Washington Post, the bureaucrats at the UN have concluded that America is a miserable and awful nation.

…a new United Nations report that examines entrenched poverty in the United States…calls the number of children living in poverty “shockingly high.” …the report, written by U.N. special rapporteur on extreme poverty and human rights Philip Alston, says the United States tops the developed world with the highest rates of youth poverty… The results of the report are not out of line with a number of others…in recent years by different organizations in which the United States has turned up at or near the top on issues such as poverty rates.

But I’ve learned from personal experience (see here and here) that the United Nations is guided by statist ideology, and I should be extremely skeptical of any of its findings.

For instance, when it intervenes in policy (global warming and gun control, for instance, as well as the Internet, the War on Drugs, monetary policy, and taxpayer-financed birth control), the UN inevitably urges more power and control for government.

So, let’s take a jaundiced look at some of the assertions in this new report, starting with that dramatic claim of record child poverty in America.

So is it true that poverty is very high in the USA and is it also true that America has the highest rate of child poverty among all OECD countries? Even higher than Mexico, Greece, and Turkey? And what is the source of this remarkable assertion?

If you look at footnote #51, you’ll see reference to an OECD publication that contains this supposedly damning chart. 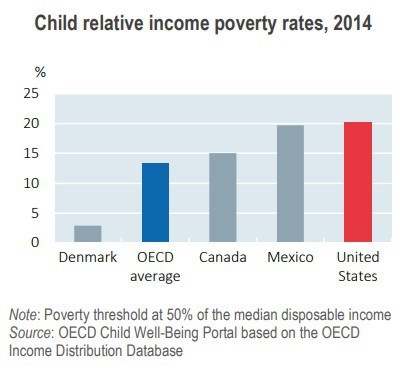 But if you look at the fine print at the bottom, you’ll discover that the chart on child poverty doesn’t actually measure child poverty. Instead, the bureaucrats at the OECD have put together a measure of income distribution and decided that “relative poverty” exists for anyone who has less than 50 percent of the median level of disposable income.

In other words, the United States looks bad only because median income is very high compared to other nations.

Which is the same dishonest data manipulation that the OECD uses when exaggerating America’s overall poverty rate (other groups that have used this deliberately dishonest methodology include the Equal Welfare Association, Germany’s Institute of Labor Economics, and the Obama Administration).

The bottom line is that the key finding of the UN report is based on a bald-faced lie.

By the way, I’m not surprised to see that the UN report also cites the IMF to justify statist policies.

In a 2017 report, the International Monetary Fund (IMF) captured the situation…, stating that the United States economy “is delivering better living standards for only the few”, and that “household incomes are stagnating for a large share of the population, job opportunities are deteriorating, prospects for upward mobility are waning, and economic gains are increasingly accruing to those that are already wealthy” …A much-cited IMF paper concluded that redistribution could be good for growth, stating: “The combined direct and indirect effects of redistribution—including the growth effects of the resulting lower inequality—are on average pro-growth.”

For what it’s worth, the IMF’s research on growth and inequality is embarrassingly bad.

Here’s another big takeaway from the UN report.

I’m not an expert on infant mortality. Indeed, I’ve never looked at infant mortality data. But given the UN’s reliance on dodgy and dishonest numbers in other areas, I’m skeptical whether these numbers are true.

And, according to Johan Norberg, the numbers about high levels of infant mortality in the United States are false.

The UN report contains many other ideologically motivated attacks on the United States.

For instance, America is a bad country because taxes supposedly are too low.

The United States has the highest rate of income inequality among Western countries. The $1.5 trillion in tax cuts in December 2017 overwhelmingly benefited the wealthy and worsened inequality. …The tax cuts will fuel a global race to the bottom, thus further reducing the revenues needed by Governments to ensure basic social protection and meet their human rights obligations. …There is a real need for the realization to sink in among the majority of the American population that taxes are not only in their interest, but also perfectly reconcilable with a growth agenda.

While the above passage is remarkable for the level of economic illiteracy, I confess that I chortled with glee when I read the part about how the recent tax reform “will fuel a global race to the bottom.”

As I wrote last year and this year, the fact that other governments will face pressure to reduce tax rates is something to celebrate.

Here’s one final excerpt. The UN report also bashes the United States because we don’t view dependency as a human right.

Successive administrations, including the current one, have determinedly rejected the idea that economic and social rights are full-fledged human rights, despite their clear recognition not only in key treaties that the United States has ratified… But denial does not eliminate responsibility, nor does it negate obligations. International human rights law recognizes a right to education, a right to health care, a right to social protection for those in need and a right to an adequate standard of living.

Needless to say, a problem with this vision of “positive rights” is that it assumes there will always be a supply of chumps willing to work hard so the government can tax away their money to finance all the goodies. But Greece shows us that it’s just a matter of time before that game ends with disaster. 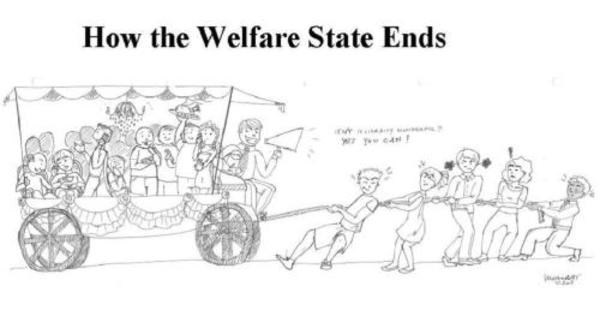 In other words, Thomas Sowell is right and Franklin Roosevelt was wrong.

Let’s close with some good news. As the Washington Post just reported, the UN’s dishonest anti-American screed apparently will prove costly to that bloated bureaucracy.

Alston arrived in Washington last fall on a mission from the U.N. Human Rights Council to document poverty in America. …he was told by a senior State Department official that his findings may influence the United States’ membership in the human rights body. …“I think I was being sent a message.” Two other people at the meeting, speaking on the condition of anonymity, confirmed Alston’s account. …Nikki Haley announced this week that the United States would withdraw from the Human Rights Council.

Her actions stand in stark contrast to some of her predecessors, who apparently believed in taxpayer-financed self-flagellation.

Alston said he was initially invited by the U.S. government under President Barack Obama to study poverty in America. The invitation was extended again by U.S. officials under then-Secretary of State Rex Tillerson in 2017, he said. “We look forward to welcoming Mr. Alston to the United States for a country visit this December,” Flacelia Celsula, part of the U.S. delegation at the United Nations, said in a meeting of the Human Rights Council on June 8, 2017.

Which brings us to the obvious takeaway. As seems to be the case with all international bureaucracies, the United Nations wastes money at a prodigious pace. With any luck, Alston’s nonsense will convince American policymakers that deep budget cuts for the UN are long overdue.