It all comes down to who's producing and who's consuming. 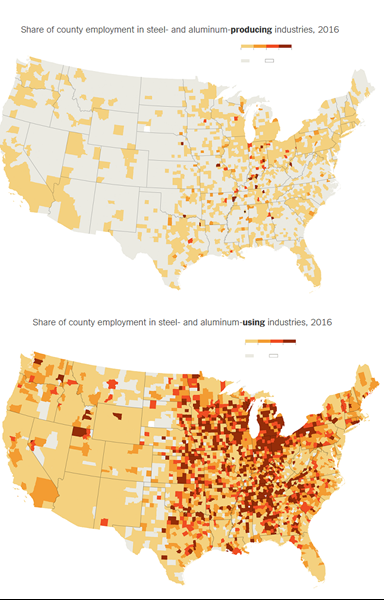 Tupelo fell hard for Donald Trump. The blue-collar enclave in northeastern Mississippi—birthplace of Elvis Presley and the American Family Association—was once home to a vibrant business in upholstered furniture. But as Chinese imports flooded in, the local economy buckled. There are fewer jobs in Tupelo today than there were at the millennium. Middle-income families are making almost 20 percent less, after inflation, than they did then. Mr. Trump’s offer to build a wall against Chinese imports was just what Tupeloans wanted to hear.

Republicans could not lose in this deep red enclave in the buckle of the Bible Belt. Still, in the 2016 election, Mr. Trump carried Lee County, where Tupelo sits, by a 38-percentage-point margin over Hillary Clinton—nine percentage points more than Mitt Romney’s lead over Barack Obama four years before. And yet it’s not working out great for the working men and women of Tupelo. Indeed, President Trump’s first big trade barrier—tariffs against steel and aluminum imports—is, again, threatening to undermine their livelihood.

For every job in Tupelo producing steel or aluminum, there are 200 jobs in industries that consume them that could be put at risk as tariffs push up the prices of these metals, according to research from Jacob Whiton and Mark Muro of the Brookings Institution. This is true across the country (see maps). The lesson the White House has yet to figure out is that the tariffs meant to protect the businesses that make these metals will end up hamstringing the industries that rely on them.

Mr. Trump will raise the cost of doing business in steel- and aluminum-consuming companies. In turn, it will make life much harder for the 6.5 million workers those industries employ. Many will lose their jobs—possibly more than the 170,000 workers currently employed in the steel and aluminum producing industries.

And that’s exactly what happened following President Bush’s steel tariffs in 2002, according to a study that found that steel-using industries lost 200,000 jobs, which was more than all the jobs in the steel industry itself at that time. Whether you look at jobs lost vs. jobs saved from tariffs, the costs to consumers per job saved by protectionism, or the costs to consumers vs. the benefits to protected producers, the math of protectionism always leads to the same conclusion: the country imposing protectionism is made worse off on net, and suffers from net job losses.