The Rich Are Being Pillaged, and Everyone Suffers

The tax system is flogging, looting, and pillaging the most successful people.

To observe that a tax reform primarily helps the rich is supposed to doom it. It should be the opposite: no tax reform is worth pursuing unless it primarily helps the rich. That’s because the current system mainly hurts the rich. It is wildly unfair, discourages wealth creation, and punishes people for doing everything an economy is supposed to do, which is boost incomes and living standards for as many as possible.

The current system mainly targets the rich. You would never know this by listening to the main debate on the street today, which rarely deals with the facts.

To gain a clear picture, have a look at this Congressional Budget Office study release in June 2016. It’s a close study of the income earned and taxes paid in 2013. The study observes that the tax system has never been more progressive. It will not be possible to reform taxes in a positive way without addressing that reality that the rich are being pillaged, a fact which might have something to do with causing slow economic growth.

Here is what the study says about the distribution of income and taxes:

Here is a graphical presentation of the same: 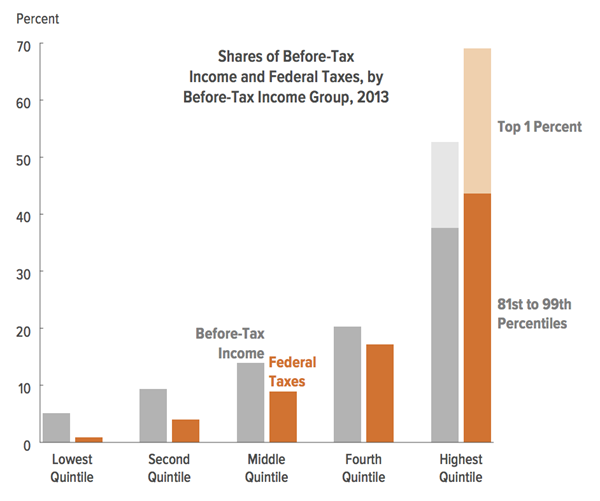 That chart tells the terrible truth: the tax system is flogging, looting, and pillaging the most successful people. The disproportion here is unjust and unproductive.

To be sure, everyone pays too much in tax and it would be absolutely delightful if excise taxes, payroll taxes, and income taxes for the poor and middle class were dramatically lowered. Still, it’s not possible to achieve anything meaningful in tax reform without addressing the core problem.

Everyone, rich and poor alike, has an interest in lower taxes.  Republicans have become so sensitive to the accusation that they are out to help the rich that the Trump proposal goes out of its way to go the other way. The proposed reform helpfully cuts the rate of corporate income tax and the capital gains tax – not nearly enough, but it is a step in the right direction.

But look at the details: among the loopholes being closed here are the traditional deductions for state and local taxes. And whom does that hurt? It harms some of the wealthiest companies and individuals in the US, simply because they live in New York and California. And guess what? These are so-called Blue States that didn’t go Republican. It would be easy to see this tax reform as a brutal punishment for not voting the right way.

You might think after nearly 10 years of slow economic growth, and 40 years of nearly flat income growth, that the political class would see the problem and would unite to do something about it. Nope. What we see on both sides of the aisle is more of the same: using the tax system as a weapon in a tribal war that pits voters against each other.

Everyone, rich and poor alike, has an interest in lower taxes. If you hear otherwise, you are being manipulated to support a system that is exploiting you.