The Pay-Productivity Gap Is an Illusion

The White House has been among those who believe in the productivity-pay gap claim: that workers’ productivity rose at a high rate over the last four decades, but growth in real earnings failed to keep pace and instead changed at a nearly flat rate (see the green line in the chart below).

These arguments continue to fuel the debate on contested labor policies such as the overtime pay rule and minimum wage increases. A more careful and comprehensive analysis of real worker pay and productivity data, however, shows that worker compensation is closely tied to worker productivity. 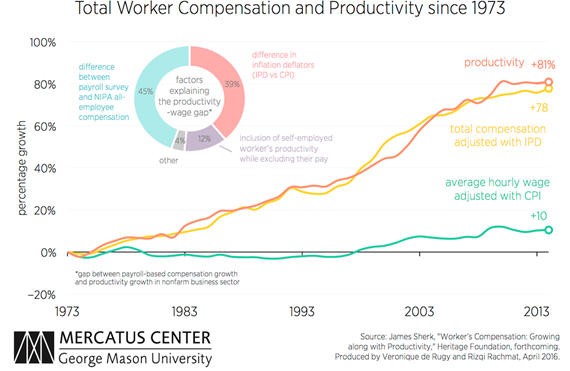 This week’s chart uses data from a forthcoming study by labor economist James Sherk, “Workers’ Compensation: Growing along with Productivity.” Using data from the Bureau of Economic Analysis (NIPA tables) and the Bureau of Labor Statistics, Sherk points out that those stating that there is a large gap between productivity and wage growth have committed the following errors:

The difference between payroll-survey-based compensation covering a subset of the workforce and NIPA data on all business employees explains 45 percent of the gap.

Counting the productivity growth of the self-employed while excluding their pay growth explains 12 percent of the gap.

These three factors account for all but 4 percent of the apparent gap between pay and productivity. Over the past generation, employee compensation has risen in step with their productivity.

The “fair wage” policy proposed by the Department of Labor at the direction of the White House, which expands the scope of coverage of employees eligible for overtime pay, is an example of a policy that distorts essential information signals between employers and workers. More importantly, such policy decisions ignore generations worth of data that show a direct and close relationship between worker compensation and productivity.

A version of this commentary first appeared at the Mercatus Center.

Veronique de Rugy is a senior research fellow at the Mercatus Center at George Mason University and a nationally syndicated columnist.