The Greatest Invention of One Thousand Years Ago

The musical staff didn't exist as a technology. Then, thanks to one man, it was created.

We celebrate modern inventors for improving our lives. But what about those one thousand years ago who laid the very technological foundation of civilization as we know it? They too served the world.

Since ancient times, the teaching of music had been done by a tiny and arrogant cartel of masters.In the first millennium AD, no one could figure out a reliable way to transmit musical ideas except by singing and playing them to each other in person. In the second millennium, a way emerged: the printed musical staff. It was a form of technology and it laid the foundation for astonishing innovations, beginning with polyphonic music, then symphonic music, then popular music, and the dizzying array of choices of all styles that surround us today.

It all began one millennium ago.

As with all inventions, the invention of the musical staff came in stages. There were ever better attempts at writing music from the 6th to the 9th century. Then there was a breakthrough. The early 11th century Benedictine monk Guido d’Arezzo (born 991/992 and died too young in 1033) invented a written system of notes and staffs, and also the organization of scales that allowed for teaching and writing music. Without his contribution, the streaming music you hear on your smartphone and YouTube would not likely exist.

Consider the technical feat that Guido undertook. Imagine a world without printed music. How would you go about conveying a tune in printed form? It’s one thing to render words on paper in a way that others can read them. But what about music? It floats in the air and resists having a physical presence at all.

Guido’s innovation busted up the cartel. How can you share the melody without singing it for them, by just writing things down? It was Guido who made the breakthrough with lines and scales that precisely illustrates for the eye what the voice is to sing. His innovation was a beautiful integration of art and science.

And what a remarkable innovation. Since ancient times, the teaching of music had been done by a tiny and arrogant cartel of masters. The choir master ruled the monastery, determining the talent hierarchy and position of every singer within it.

You had to sing exactly as they instructed you. If they weren’t around, you were stuck. They held the monopoly. To become a master of music, you had to study under one of the greats, and then receive the blessing to become a teacher yourself, overcoming the masters’ interest in limiting their numbers. You’d have to be sycophantic to even get your foot in the door.

The elite musicians resisted his attempt to democratize the knowledge and conserve time. Guido’s innovation busted up the cartel. His primary interest was in notating Gregorian chant in particular. He was frustrated that the chant was passed on by oral tradition only. He worried that melodies would be lost, especially given the then-new fashion for multi-part improvisation.

So while scholars have usually treated Guido as an innovator, what’s been forgotten is that his innovations were driven by the desire to conserve and preserve art for future generations. Maintaining and passing on this tradition was the key issue for him; the technical aspects of the music and writing were merely tools and not ends in themselves.

The Cartel of Masters

There is an interesting sociological element to the story. Guido had become seriously annoyed at the chant master cartel and the power it exercised. He wanted the chant to be freed and put into the hands of everyone both inside and outside the monastery walls.

For this reason, his first great project was a notated Antiphoner, a book of melodies. He wrote:

“For, in such a ways, with the help of God I have determined to notate this antiphoner, so that hereafter through it, any intelligent and diligent person can learn a chant, and after he has learned well part of it through a teacher, he recognizes the rest unhesitatingly by himself without a teacher.”

He goes further. Without a written form of music, “wretched singers and pupils of singers, even if they should sing every day for a hundred years, will never sing by themselves without a teacher one antiphon, not even a short one, wasting so much time in singing that they could have spent better learning thoroughly sacred and secularly writing.”

The elite musicians resisted his attempt to democratize the knowledge and conserve time. Guido did what every great innovator does: he freed up resources for other uses even while improving lives. He wanted to free the monks from endless studies of music, under the control of a single master, in order that they could have more time to purify their spiritual lives.

His innovation centered on finding and marking the half step in the musical scale. If musicians could know where that appeared in the melodic line, the rest followed as a matter of logic. He invented a moveable clef sign and a series of lines to mark the rest, essentially creating a physical map of sound space. The rhythms were already in an innovative stage, so he displayed those on the staff. No longer were the chant masters necessary to model the music. The paper could be ported from person to person (P2P, so to speak) and given to everyone. 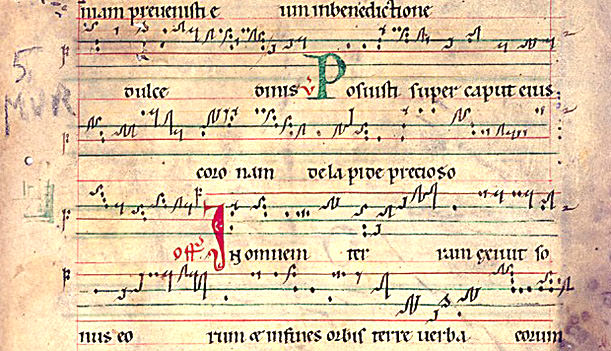 As a result of his innovation, you might think he would have been celebrated. Instead, his monastery in Pomposa, Italy tossed him out into the snow at the urging of the chant masters who wanted to maintain their power.

He then went to the Pope, who was very impressed at his innovation and gave him a letter of support. With the letter in hand, he went to the Bishop of Arezzo, who took him in so that he could continue his preaching and his work.

This story illustrates a general pattern in the history of technology. There are those who believe that innovation is for everyone and ought to be accessible to all — that everyone should be permitted to have access to the forms and structures that make for progress. This side loves technical innovation not for its own sake but in the service of great goals.

Then there is the other side, which is reactionary, hates technical innovation, wants to reserve technical forms to a tiny elite, fears freedom, detests the idea of human choice, and advances a kind of Gnosticism over technical forms, which are to remain the private preserve of the elect who appoint each other and operate as a kind of guild. This Gnostic guild wants to guard and exclude and privatize, and the people are ultimately their enemy.

This perspective hearkens back to the ancient world where priests served the throne, and sparingly handed out religious truth to the masses based on what they believed they should know in the service of their agenda.

One can detect these two tendencies from all ages.

In his pedagogy, Guido adapted an existing song to illustrate the scale: Ut Queant Laxis, a hymn to St. John the Baptist, who was then considered the patron saint of singers. On the first syllable of each ascending note, the words were Ut, Re, Mi, Fa, Sol — the very foundation of music pedagogy to this day: do, re, mi, etc.

A millennium later, Guido’s innovation is still with us! Here is a traditional chant tune he used to teach his student. You can see that the first syllable of each phrase with a changed note forms the basis of modern musical pedagogy.

Now, here is a paradox. Though his innovation was revolutionary, he was a "conservative" by temperament. He favored the chant, and the preservation of the chant, and didn't have much affection even for part writing, that is, more than one sound sounding at a time.

Indeed, it’s rather amusing that in his last book on music, he nowhere mentions the existence of early multi-part music, though it had become very popular by the time of his death. He must have thought of it as corrupt and decadent, the way some people think of the latest pop music today.

His personal goal was preservation. But the social effect was to dramatically upset the status quo, cause tremendous professional upheaval, inspire even more innovation, and ultimately make the world a more beautiful place.