Your intuition is right: tax cuts are good and tax increases are bad.

If your profligate friend blew his budget on liquor, you might feel bad for him. But it’s unlikely that you would be willing to fork over money to cover his mistake. He needs to figure it out. And maybe, then, he will learn a lesson for the future.

This is exactly how I feel about all this whining about the federal deficit. I didn’t cause it. It’s not my problem. I should not be forced to pay for it. I don’t work every day in order to earn money to pay for other people’s problems.

It's bad citizenship always to be willing to pay the government’s debts. Admit that you agree. You don’t really care about the deficit. Not really. It’s an abstraction to you. More crucially, the deficit is not your fault. You are not responsible for paying for one dime of the federal debt. No portion of your justly made income should be taken to cover the fiscal irresponsibility of anyone except perhaps your children.

All this media talk–and it is incessant and ubiquitous–about how the deficit is way more important than your property rights completely disregards the realities of politics. Namely: politicians and bureaucrats desperately need an excuse to take your money. Making you pay for their past mistakes is as good an excuse as any.

Your intuition is right: tax cuts are good and tax increases are bad.

Wait just one minute, say the high-level economists. What about Ricardian Equivalence? This is the idea that government must pay its debts eventually through either inflation or taxation. The general public intuits this and adjusts its spending expectations with that in mind. This causes a reduction in “aggregate demand” which is, more or less, the same as inflation which is the same as taxation.

So, therefore, we should just tax everyone now.

That’s some pretty fancy thinking here, all designed to pillage you now for fear that government might pillage you later. From a rhetorical point of view, this works brilliantly.

“Kind sir, you have forgotten that Ricardian Equivalence makes a tax cut economically impossible so long as government runs debts, which you will pay regardless.”

“But it sure would be nice to keep more of my own money to pay for my kids’ college.”

“I’m afraid you have failed to understand the science.”

“Surely it is the case that if government takes less of my money, I will therefore have more of it.”

“I would appear that you need to attend some graduate economics seminars.”

So what’s wrong with the theory of Ricardian Equivalence? It’s an example of a theory that works mathematically but probably has no application in real life. Today is not the 18th century. The market for US debt is global. The central bank has the ability to print without limit. With the dollar as the world reserve currency, we’ve got a long way to go before that would automatically translate into hot money on the street.

This is easier to understand if you look at the way debts in the developing world are used by governments as a way of keeping the people poor. The IMF shows up and says: you really must reduce this debt. Dictators say: our pleasure. They raise taxes higher on everyone and in every form: excise taxes, business taxes, personal taxes, and tariffs. Here we can clearly see how the existence of government debt is being used as a way to keep the boot on the throat.

It is less clear in the US case because all the “responsible voices” are demanding that taxes never be cut lest the federal budget is blown to bits.

Plus, it is simply not the case that a deficit must only be paid with taxes or inflation. Government can sell assets to the highest bidder and keep the money. (You could say that government doesn't deserve even that since it is selling stolen property. True enough. But in this case, I'm relaxing libertarian scrupples a bit.)

Look at this map. 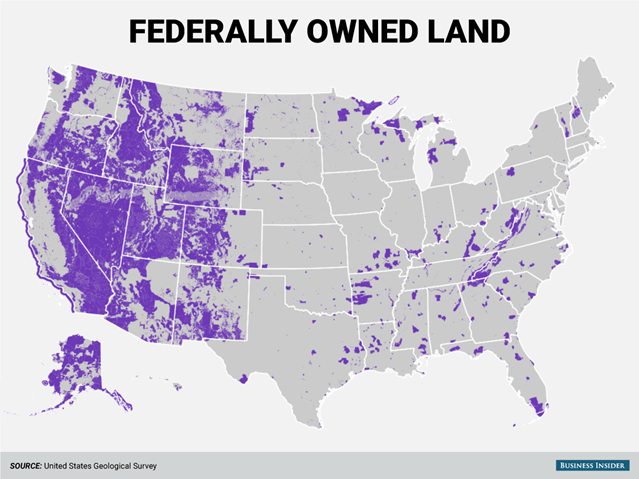 You can see that the federal government is a real estate mogul extraordinaire, owning essentially 24% of the land area of the United States. If you owned that much land, you would be worth nearly $2 trillion dollars (according to this government estimate). Folks, this is four times the amount of the US deficit. If the government sold this today, the annual budget would be in massive surplus. Add some spending cuts and we are in good shape.

Let government disgorge its holdings before it continues to pillage the rest of us.  And that’s just land. The valuation of the rest of government resources is probably incalculable.

Let government disgorge its holdings before it continues to pillage the rest of us. Plus, this land in private hands would actually become productive, creating more wealth.

Indeed, there is a growing market for selling government land. FreeSociety.com proposes globalizing this model, for example. Sell it. Sell it all!

You say that this plan is impractical? Maybe, but that’s because of the lack of political will. What politicians always seem to have the will to do is forever take too much  money we could otherwise be using to make our lives better.

And this, my friends, is precisely why I’m fed up with all this talk about the federal deficit as the great excuse for keeping everyone poor. It’s a ruse. It’s time we admit it.