While it was initially unclear how the Janus ruling would affect agency fees and union membership, new numbers reported to the Labor Department shed light on its impact so far.

The Supreme Court made history last summer in the case of Janus v. American Federation of State, County and Municipal Employees (AFSCME) reaffirmed an individual’s First Amendment right to freedom of association. In a 5-4 ruling, SCOTUS ruled that labor unions could not force government employees to pay union dues.

In the aftermath of Janus, labor unions have been holding their breath waiting to see how this landmark case would impact both their funding and their membership. Now, nearly a year later, reports filed with the US Department of Labor show that two giant public sector unions are reporting major decreases in agency payers, demonstrating just how significant a blow the ruling was to unions.

A fundamental flaw at the core of labor unions is that they view workers as a collective rather than treating them as individuals.

The news should be celebrated as a victory over union intimidation; truly good ideas, after all, do not require force. However, despite the tremendous strides that have been made over the last year, the battle for the right to work has not been won quite yet.

Prior to the Janus case, the courts ruled that government employees could not be forced to join labor unions. They could, however, be forced to pay union agency fees. A fundamental flaw at the core of the existence of labor unions is that they view workers as a collective rather than treating them as individuals. As such, when an agency is hired to collectively bargain on behalf of a public sector industry, they are doing so on behalf of all employees—not just the union members.

Since the non-members are technically still “benefiting” from an agency’s collective bargaining, it was argued that allowing them to opt out of agency fees would give rise to “free riders” who benefit from a system they do not pay for. For years, unfortunately, courts agreed.

Decades later, Mark Janus, a child support specialist at the Illinois Department of Healthcare and Family Services, challenged this precedent, taking his case all the way to the Supreme Court.

Explaining why he decided to take this case to court, he said:

When I was hired by the state of Illinois, no one asked if I wanted a union to represent me. I only found out the union was involved when money for the union started coming out of my paychecks.

States and public-sector unions may no longer extract agency fees from nonconsenting employees. This procedure violates the First Amendment and cannot continue.

While it was initially unclear how exactly this ruling would affect agency fees and union membership, new numbers reported to the Labor Department have shed some light on its impact so far. According to the numbers disclosed, the AFSCME and the Service Employees International Union (SEIU) lost a combined total of 210,000 agency fee payers during 2018, showing just how big of a role coercion plays in their revenue stream.

That’s a lot of people and it bears asking: Just how much money are we talking? It’s a tricky question to answer. Overall losses for the entire union are hard to calculate since some union chapters have chosen not to disclose this information. However, some back-of-the-napkin arithmetic can offer a general idea.

Additionally, the LM-2 forms filed with the labor department by the AFSCME, which disclose the details of the union’s financial information for each year, put the loss of revenue into perspective. 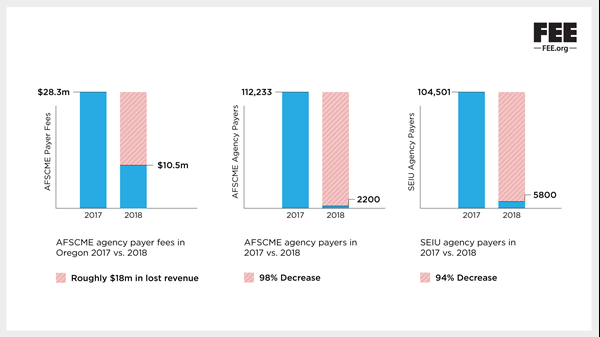 To be clear, these agency fees do not account for the total amount of union fees collected from employees. But they are responsible for about 75-85 percent of the total revenue being generated on a regular basis. And without these coerced fees being collected, the unions will surely have to rethink their strategy.

Part of the reason that unions have grown so powerful is that for years, they have had the authority to forcibly collect all this money with very little effort—even from those opposed to it on principle. With this money, they have been able to spend a great deal on lobbying in order to hold on to their power. Without these funds, they may soon find their power dwindling and may have to face the harsh reality that not all workers want what they are selling.

The SEIU and AFSCME aren’t the only ones feeling the sting of the Janus ruling. According to Bloomberg, two major teacher unions, the National Education Association (NEA) and the American Federation of Teachers (AFT), have also experienced major losses in agency payers. However, just how bad of a hit the other unions have taken has not been disclosed since only unions with exclusively private-sector members, or a mixture of private and public sector workers, are required to report this information to the Department of Labor.

While the dip in agency payers is an encouraging sign for the future of the right to work movement, on their own, these numbers do not tell the full story. To clarify, a decrease in agency fees does not necessarily reflect a decrease in union membership.

Janus set a clear path for public-sector workers to have more choice over their union affiliation, but it did nothing to discourage or outlaw union membership altogether. In 2018, the same year of the Janus ruling, AFSCME actually saw membership increase by more than 9,000 members. While this number seems large, it’s really only a one percent increase from the previous year. Still, it shows an upward trend in spite of the ruling. However, SEIU lost almost 4,500 members.

Patrick Wright, vice president for legal affairs at the Mackinac Center for Public Policy commented on the situation, saying:

Most agency fee payers left, the big question going forward is how many full members are going to join them.

The unions, on the other hand, are doubling down and insisting that their members aren’t going anywhere. A spokesperson for the SEIU said in an email, “members are sticking together despite anti-worker extremists spending millions to divide us.” Likewise, the president of the AFSCME, Lee Saunders, wrote in a press release that “overwhelming numbers” of members were choosing to “stick with their union.”

These numbers are coming from the mouths of spokespersons, not from actual Labor Department filings.

These union bosses might be optimistic now, but if we look at the state of teacher union membership in right to work states prior to Janus, it becomes clear that the optimism might be misplaced. Before Janus, states that prohibited forced agency fees for public school teachers had unionization rates that were 24 percent lower than states that did not.

Nationally, the NEA had 88,000 members prior to Janus and has recently stated that membership grew by more than 13,000 since last summer. However, on the reports to the labor department, the section about membership was left blank. So while they have claimed growth, there is no actual evidence for it currently. Likewise, the ATF reported that it lost 84,600 agency payers, but, like the NEA, still claims its membership is up. Yet again, these numbers are coming from the mouths of spokespersons, not from actual Labor Department filings.

Good Ideas Do Not Require Force

As we are only nine months out from the Janus ruling, the full ramifications have yet to be seen. However, these initial numbers do not bode well for the future of public sector unions, and this is a good thing.

The entire existence of public sector unions goes against the market process in that they do not accurately represent demand, at least not prior to Janus. When someone is forced to pay for something or lose their job, they are being compelled to participate, rather than voluntarily agreeing to do so.

While membership rates have not yet toppled at the same rate as the agency fee payer rate, this on its own is very telling. It’s nice for the unions to boast of continued membership, but there is no stronger show of support than an individual’s willingness to vote with their dollars. And when it comes to paying the agency fees, this is something many employees just don’t seem willing to do now that they are not being forced into it.