Solzhenitsyn and the Economic Lesson of Soviet Gulags

His books started a slow burn in Russia that would eventually send the Soviet Union into the ash heap of history. 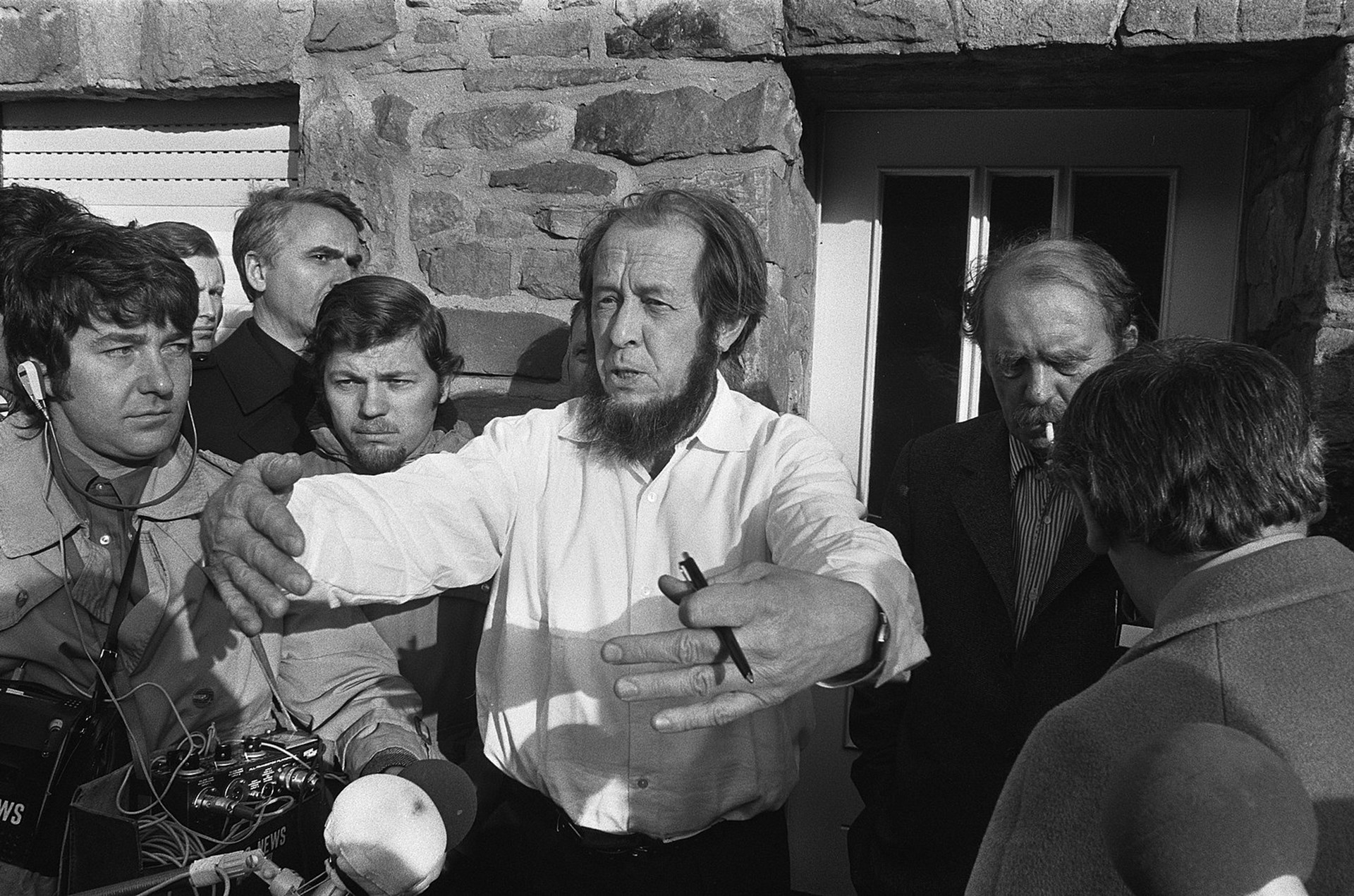 In 1929, the Politburo of the Communist Party of the Soviet Union approved a resolution that sealed the economic fate and function of the nation’s prison camp system, the Gulag. The language of the document read ‘‘On the Utilization of the Labor of Criminal Prisoners,” and it empowered the Soviet state to exploit the free labor of all prisoners on the Solovetsky Island prison. The island was effectively made a plantation, and its prisoners became slaves at the hands of their own government. More than 50,000 prisoners would be sent to the island. Many would not return.

Many stories of arrest, interrogation, and torture, might have been lost to the dustbin of history had it not been for Solzhenitsyn.

Within the confines of opened Soviet archives and declassified CIA reports, the full participation of Gulag prisoners in the Russian economy is now known. Heavy industry, mineral mining, and construction are just a few areas of the Russian economy that relied on the slave labor of Gulag prisoners. Though the motivation for the Gulag was as much ideological as it was economic, with the belief that man can be perfected by work, the economic consequences of the system are undeniable.

Arrested according to quota requirements rather than evidentiary conviction, prisoners were often taken from their homes, places of business, or right off the street by the NKVD. Many stories of arrest, interrogation, torture, and travel to the camp might have been lost to the dustbin of history had it not been for Alexander Solzhenitsyn.

The Gulag as an Economic Resource

From its inception, the Gulag was meant to have a significant impact in the life of the Soviet economy. The Stalinist Gulag prison system of the 1930s aided in the construction of the ill-fated White Sea Canal, which was too narrow and too shallow for maritime or commercial transportation traffic. Begun in the last half of 1930, the canal was built in two years and swallowed up an estimated 100,000 gulag prisoners. Under the control of the NKVD, the canal’s construction was hasty and used very little engineering in its planning or construction.

Taking so many engineers and scientists out of the population and working them in the camps as class enemies staggered the growth of Soviet industry.

An integral part of Stalin’s Five-Year Plans concerned heavy industry, mining minerals, and raw materials. Political prisoners with long prison terms were sent to the Kolyma gold mines in the far east of the USSR or the coal mines of the Karaganda Basin. In most cases, the camps were so poorly run that the cost-benefit analysis put the operation in the red and resulted in a net loss.

The opportunity cost of taking so many engineers and scientists out of the Soviet population, charging them as class enemies, and working them in the camps was enormous and staggered the growth of Soviet industry. This method was used in the dekulakization of the nation by Stalin, which flew in the face a carefully planned economy, for example. Anne Applebaum has theorized that this was one of the main reasons the Soviet Union struggled to catch up to the West.

The Extent of the Gulag Archipelago

From its origins on the Solovetsky Islands in the White Sea to the infamous Kolyma gold mines in the far east of the Soviet Empire, the Gulag stretched from one end of the nation to the other. Soviet secret police and terror policies were an “integral part of the Soviet system,” a metabolic part of state DNA placed there by Lenin himself. This conveyor belt apparatus, meant to dig deep into Soviet cities by extracting the ore of innocent people who were deposited into the grinding camp experience, fed a system of camps that existed in every major Russian city across its dozen time zones.

Many western historians insist that the corrective labor camps of the Russian socialists were simply a carryover from Czarist times—that Lenin and Stalin did not invent them but simply added on to an existing system. However, when compared to the actual numbers of camp prisoners and the types of prisoners under the Russian Czar in 1917 (a mere 28,600, mostly criminals), the millions in Lenin—and Stalin—era camps come into focus as the outcropping of the system’s DNA.

The economic extent of the Gulag and its ravaging effects on the Russian people would be on full global display in the years to come.

There is no mistaking the extent of the Gulag: At its zenith, 15 percent of the entire Soviet population was involved in the camp system at some level as “class enemies.” Accused and convicted by quota and not criminal evidence, kulaks—so named by Stalin and the Young Pioneers—POWs, and anyone caught in the net of Article 58 of the Soviet Criminal Code, were thrown in the camp mire or forced into confessions and wasted lives.

The full extent of the Gulag and its socialist pretensions of state protection and human perfectibility were exposed to the world by the author Alexandr Solzhenitsyn. Upon his release from prison, both as a camp laborer and while in exile, in 1956 Solzhenitsyn wrote One Day in The Life of Ivan Denisovich, a fictitious account of a Gulag prisoner. Other books on Soviet oppression would follow, including his masterwork The Gulag Archipelago, which, through three volumes, chronicled the history and inner workings of the Gulag prison camp system.

Solzhenitsyn was received with relief and curiosity by his Soviet readership to the extent that Soviet Premier Nikita Kruschev himself allowed for the publication of One Day in The Life of Ivan Denisovich in 1962, and copies were read by many members of the Politburo. Soon after its release, One Day in the Life was discontinued in the Soviet Union, and copies were removed from libraries and bookstores, but it did not matter. The economic extent of the Gulag and its ravaging effects on the Russian people would be on full global display in the years to come.

By the time of his release from prison in 1956, Solzhenitsyn lived in a world free of Josef Stalin. Right away, Solzhenitsyn began to write, and the Soviet reception of A Day In The Life was so dramatic and far-reaching that most living in the USSR thought that government censorship was over. The book became an instant bestseller in the Soviet Union and on the international stage.

Someone had at long last exposed the butchery of the Russian socialist system and motivated other Soviet dissidents, such as the noted Russian physicist Andrei Sakharov, to join the Russian dissident movement in the 1960s. Solzhenitsyn had become such a galvanizing figure that he was expelled from the Soviet Union in 1974 after he wrote and sent manuscripts of The Gulag Archipelago abroad for international publication. His books started a slow burn in Russia that would eventually send the Soviet Union into the ash heap of history.

Those who have read Solzhenitsyn’s work are both warned by history and gifted a blueprint for thoughtful resistance to tyranny.

Alexander Solzhenitsyn wrote constantly during his exile in Vermont, and he dreamed of one day being allowed back into his home country. The impossible was realized when Solzhenitsyn returned to Russia soon after the collapse of the USSR in 1991. The impact of his writing in his absence had quietly stirred public opinion toward the truth of the rotten socialist system but had done little to stabilize the political structure of Russia.

The domino-like fall of all Eastern Bloc nations in the Soviet sphere was swift and final, with communist dictators like Romania’s Nicolae Ceausescu removed by his own people. The Gulag Archipelago is now required high school reading in Russia and is known throughout the world. Those who have read Solzhenitsyn’s work are both warned by history and gifted a blueprint for thoughtful resistance to tyranny. May it never again have to be used as such.

Joshua Hofford is a Social Studies Coordinator for a mid-sized school district south of Fort Worth Texas where he lives with his wife and three children.