Unfortunately, this is not the first time the ACLU has backed away from upholding constitutional principles.

Since 1920, the American Civil Liberties Union (ACLU) has generally upheld its mission to “defend and preserve the individual rights and liberties guaranteed to every person in this country by the Constitution and laws of the United States."

Of all the protections guaranteed in the Constitution, the right to due process is among the most sacred. It is this right that protects each of us from being held legally accountable should we be arbitrarily accused of a crime.

The ACLU has been a consistent advocate for our civil liberties for nearly 100 years, including the right to due process and, thus, the presumption of innocence. But recent statements made by the organization have many concerned that its consistent track record may soon be coming to an end.

The Burden of Proof

Just weeks ago, the Department of Education released its new set of proposed guidelines, instructing schools on how to comply with Title IX of the of the Education Amendments Act of 1972. Title IX has received a lot of attention in the #Metoo era, as it informs colleges and universities how to deal with accusations of sexual assault. It states:

No person in the United States shall, on the basis of sex, be excluded from participation in, be denied the benefits of, or be subjected to discrimination under any education program or activity receiving Federal financial assistance.

While the text itself is rather straightforward, campuses are generally given guidelines that help them enforce the language in Title IX. The last time the guidelines were changed was in 2011 when the Obama Administration lowered the evidentiary standard that was to be used in legal proceedings regarding sexual assault allegations.

In an advisory notice now known as the “Dear Colleague” letter, the standard was lowered to a “preponderance of evidence,” which is the counterpart to “beyond a reasonable doubt.” Where the latter stipulates that there can be no other reasonable explanation than to assume the guilt of the accused, the former sets a much looser standard.

From a legal perspective, this sets a much lower bar for convicting people accused of crimes and misconduct.

To prove someone’s guilt through a preponderance of evidence, the accuser must convince a judge or jury that there is a greater than 50 percent chance that their claims are true. From a legal perspective, this sets a much lower bar for convicting people accused of crimes and misconduct.

The Obama-era guidelines also instructed campuses to prohibit any cross-examinations of the accuser in order to avoid causing any further trauma. However, while this gave stronger protections to the accuser, it downplayed the importance of due process for the accused—who stand to lose a great deal even if the allegations turn out to be false.

Under the Department of Education’s new proposed guidelines, the preponderance of evidence standard can still be used. But if the new proposed guidelines are adopted, campuses are also free to use the stricter standard of “clear and convincing evidence,” which is one step below beyond a reasonable doubt. Clear and convincing proof means that the evidence provided by the accuser has a higher probability of being true than it does of being false. The new rules would also mandate that the accuser be subject to cross-examination.

As The New York Times reports:

Under the new rules, schools would be required to hold live hearings and would no longer rely on a so-called single-investigator model. Accusers and students accused of sexual assault must be allowed to cross-examine each other through an adviser or lawyer. The rules require that the live hearings be conducted by a neutral decision maker and conducted with a presumption of innocence. Both parties would have equal access to all the evidence that school investigators use to determine facts of the case, and a chance to appeal decisions.

Historically, the ACLU has promoted legal protections that require the state to prove beyond a reasonable doubt that an accused person is guilty of a crime. But when it comes to accusing someone of sexual assault on campus, the ACLU appears poised to abandon this principle.

The End of An Era

Shortly after the new guidelines were revealed, the ACLU tweeted:

Today Secretary DeVos proposed a rule that would tip the scales against those who raise their voices. The proposed rule would make schools less safe for survivors of sexual assault and harassment when there is already alarmingly high rates of campus sexual assaults and harassment that go unreported. It promotes an unfair process, inappropriately favoring the accused and letting schools ignore their responsibility under Title IX to respond promptly and fairly to complaints of sexual violence. We will continue to support survivors.

The tweet was later backed up with a blog post from the organization in which it avoided using the term “due process” and instead claimed to be defending “fair process”:

The ACLU is equally committed to ensuring students can learn in environments free from sexual harassment and violence and to guaranteeing fair process for both respondents and complainants.

Investigative journalist Glenn Greenwald, a staunch civil liberties advocate, lambasted the ACLU for its tweet and suggested it might be time to look to other organizations to aid individuals in upholding cherished civil liberties.

What has happened to ACLU is one of the saddest developments of the Trump era. But there are already groups – such as @TheFIREorg- emerging to replace it as an actual civil liberties group which defends rights regardless of partisan outcomes. 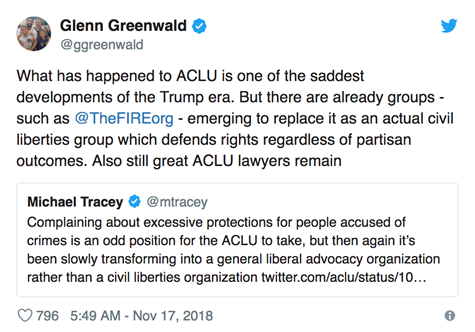 “Not only will these rules restore basic due process and fairness to college tribunals, but they also—given how basic the changes are—highlight just how ridiculous university kangaroo courts have become.”

“The old-school ACLU knew there was no contradiction between defending due process and ‘supporting survivors.’ Indeed, it was through healthy processes that we not only determined whether a person had been victimized, but also prevented the accused from becoming a ‘survivor’ of a profound injustice.”

Another problem, as Naomi Schaefer Riley writes in National Review, is that campus “kangaroo courts” were never supposed to deal with matters as serious as sexual assault in the first place. They were established in the 1960s and 70s to adjudicate more trivial matters such as student plagiarism and honor code violations. As such, these disciplinary panels are ill-equipped to deal with something as severe as sexual assault allegations.

Unfortunately, this is not the first time the ACLU has backed away from upholding constitutional principles.

Failing to give the ACLU credit for its phenomenal work in protecting individual rights over the years would be unfair. Yet there’s no denying the organization is deviating from its core mission.

While the ACLU has typically been unwavering in its support for the First Amendment rights to free speech, recent comments made by the ACLU have led many to wonder if this may soon change, as well.

In regards to First Amendment protections, the organization states:

...the ACLU is committed to defending speech rights without regard to whether the views expressed are consistent with or opposed to the ACLU’s core values, priorities and goals.

However, they have also stated that they reserve the right to deny taking cases if “the extent to which the speech may assist in advancing the goals of white supremacists or others whose views are contrary to our values.”

This summer, a leaked internal memo revealed that the organization had adopted the belief that hate speech did not qualify as free speech. The memo read, “Speech that denigrates such groups can inflict serious harms and is intended to and often will impede progress toward equality.”

Given its unwillingness to defend the right to due process, there are reasons to be concerned with the direction in which the organization is heading.

The ACLU later discounted the language used in the memo in a blog post rededicating itself to the issue of free speech. However, given its unwillingness to defend the right to due process, there are reasons to be concerned with the direction in which the organization is heading.

And this is to say nothing of a part of the Bill of Rights that the organization has ignored entirely: the Second Amendment. By choosing to interpret the Second Amendment as a “collective right,” the ACLU has fallen woefully short when it comes to protecting each individual’s right to bear arms.

Allegations of sexual assault and misconduct should most certainly be taken seriously. But not at the expense of the accused or the civil liberties that protect all Americans.

The American legal system was founded on the premise that all accused individuals are innocent until they are proven guilty in a court of law. It is this maxim that sets our legal system apart from so many others. By removing this safeguard, we do a grave disservice to the pursuit of justice, even when it applies to those accused of the most heinous of crimes.