Taxes Are Worse than You Thought

We are quickly approaching the deadline for filing (and paying) our federal and state income taxes (extended to April 18 this year because of Emancipation Day), and that means it’s time for my annual post at tax time to help put things in perspective.

1. Some Historical Perspective. “In the beginning” when the US federal income tax was first introduced in 1913, it used to be a lot, lot simpler and a lot easier to file taxes; so easy in fact that it was basically like filling out your federal tax return on a postcard.

The maximum marginal income tax rate in 1913 was only 7% on incomes above what would be $12 million today.For example, page 1 of the original IRS 1040 income tax form from 1913 appears above. There were only four pages in the original 1040 form, including two pages of worksheets, the actual one-page 1040 form above, and only one page of instructions (view all four pages here). In contrast, just the current 1040 instructions for 2016, without any forms, runs 106 pages. 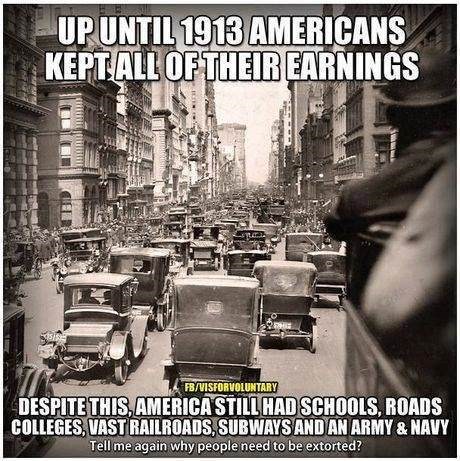 2. Tax Graphic of the Day (above). Some more historical perspective…

3. Opportunity Cost. In a 2012 report to Congress (most recent data available), the National Taxpayer Advocate estimated that American taxpayers and businesses spend 6.1 billion hours every year complying with the income tax code, based on IRS estimates of how much time taxpayers (both individual and businesses) spend collecting data for, and filling out their tax forms. In addition, Americans will spend an estimated $10 billion for the services of tax preparation firms and $2 billion on tax-preparation software programs like TurboTax that still require many hours of time.

The amount of time spent on income tax compliance – 6.1 billion hours – would be the equivalent of more than 3 million Americans working full-time, year-round (or 2.1% of total US payrolls of 145.9 million). By way of comparison, the federal government currently employs 2.8 million full-time workers, and Wal-Mart, the world’s largest private employer, currently employs 2.2 million workers worldwide and 1.3 million workers in the US (both full-time and part-time). At the current average hourly wage of $21.90 an hour, the dollar value of the opportunity cost associated with tax filing would be more than $131 billion, slightly more than the 2016 GDP of Washington, D.C. ($127 billion).

As T.R. Reid pointed out recently in a New York Times op-ed, it really doesn’t have to be that way. For example:

In Japan, you get a postcard in early spring from Kokuzeicho (Japan’s IRS) that says how much you earned last year, how much tax you owed, and how much was withheld. If you disagree, you go into the tax office to work it out. For nearly everybody, though, the numbers are correct, so you never have to file a return. 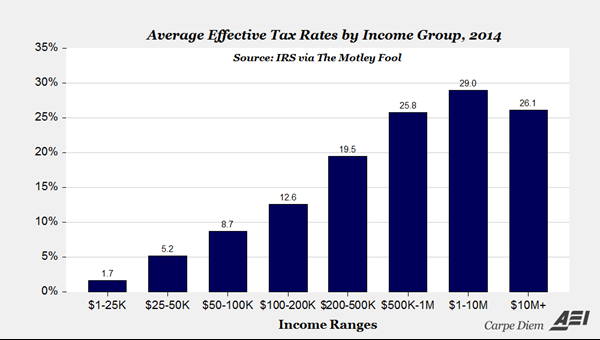 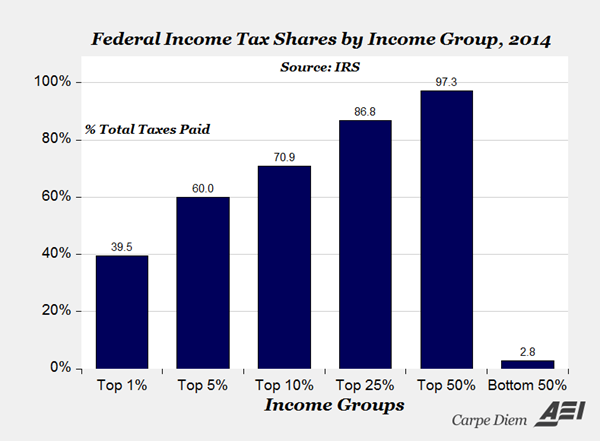 5. Tax Progressivity and Tax Burden. According to the most recent IRS data, the federal income tax shares by six different income groups are displayed in the chart above. Almost all federal income taxes (97.3%) are paid by the top 50%, more than 2/3 of income taxes are paid for by the top 10% and nearly 40% of taxes are paid by the top 1% of taxpayers. For all of the criticism and negative publicity the “Top 1%” get, I’d like to personally thank that group this year at tax time for shouldering such a disproportionate share of our collective tax burden. It’s a form of “disparate impact” on the 1% that we all benefit from! So, I say “Thank You Top 1%” from all of us in the bottom 99% for your valuable and significant contribution to our nation’s tax burden. 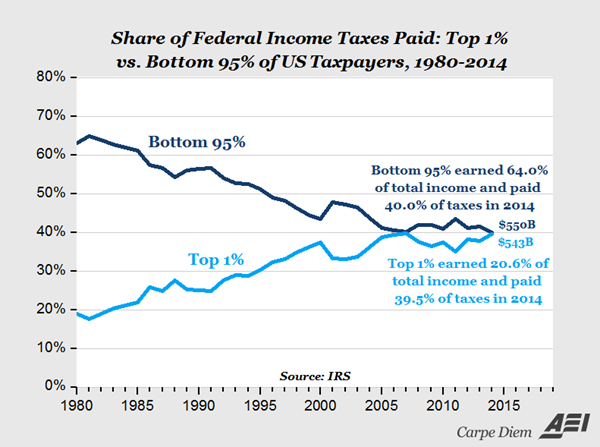 Why are Tax Day and Voting Day so far apart? Couldn't we move Tax Day to the first Monday in November, or Voting Day to the first Tuesday following April 15?7. Bowling vs. Taxes. Speaking of the progressivity of income taxes, here’s a thought about the way we tax income vs. the way we score bowling. Under the scoring rules of bowling, you get rewarded, not penalized, for being successful. If you get a spare, the scoring system rewards you by adding the pins from the next ball into the current frame, and if you get a strike you get rewarded by adding your next 2 balls into the current frame.

Under our progressive income tax system with seven tax rates in 2015 increasing from 10% to 39.6%, you get penalized, not rewarded, for being successful, productive and entrepreneurial, because the more you earn, the higher the tax rate you pay. The top marginal income tax rate has been as high as 91% in the 1950s and 1960s, and 70% in the 1970s. If we scored bowling the way we tax income, we would subtract, not add pins for a spare or strike, i.e., penalize successful bowling. If we taxed income the way we score bowling, we would have lower, not higher, tax rates on our most successful income-earners.

9. What’s in a Name? Why do we call the IRS a “service?” Couldn’t it have been named a department like Labor, a bureau like the BLS or the FBI, a commission like the FTC, an administration like FDA, an agency like EPA, etc.?

10. 20 Inspirational Quotes about Taxes from Forbes, here are a few good ones:

“The taxpayer: that’s someone who works for the federal government, but doesn’t have to take a civil service examination.” – Ronald Reagan

“We have what it takes to take what you have.” – Suggested IRS Motto

“It is a paradoxical truth that tax rates are too high today and tax revenues are too low, and the soundest way to raise the revenues in the long run is to cut the tax rates.” – John F. Kennedy

I am proud to be paying taxes in the United States. The only thing is I could be just as proud for half of the money.” – Arthur Godfrey

“A liberal is someone who feels a great debt to his fellow man, which debt he proposes to pay off with your money.” – G. Gordon Liddy