Stop Blaming the State for Your Problems; Criticize by Creating

The state does awful things, yes, but blaming it for everything that's wrong in your life does no one any favors, least of all you.

The state is, without a doubt, a destructive and formidable beast that exists at the expense of the individuals it claims to serve. It can be easy for liberty lovers to get caught up in anger and resentment for an unstoppable foe. But, if we are not careful, our loathing will consume us to a point where personal responsibility is lost in a sea of perpetual blame. And when this happens, we become no better than our opponents.

Fans of Murray Rothbard may be familiar with the meme featuring the brilliant economist and historian with a caption that reads, “I got 99 problems, and the government is responsible for all of them.” 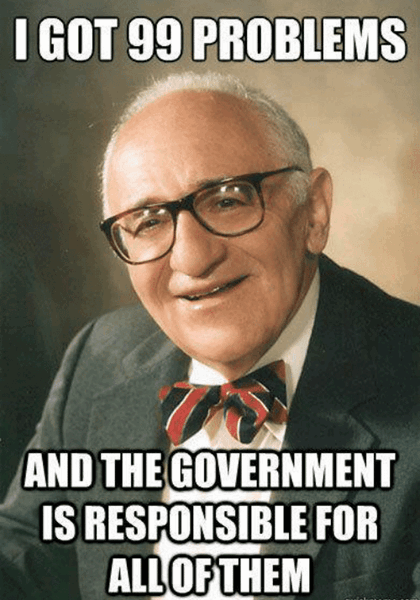 The image is admittedly hilarious, but when taken to its extreme, the message is actually detrimental to our own cause and our own peace of mind.

We’re Good at Seeing This in Others

In his book Liberalism, Ludwig von Mises speaks of the spiral in which many socialists get caught.

Resentment is at work when one so hates somebody for his more favorable circumstances that one is prepared to bear heavy losses if only the hated one might also come to harm. Many of those who attack capitalism know very well that their situation under any other economic system will be less favorable. Nevertheless, with full knowledge of this fact, they advocate a reform, e.g., socialism, because they hope that the rich, whom they envy, will also suffer under it.

Plagued by resentment, the “have-nots” focus their energy on how they can take from the “haves,” and this concentration on what they do not have turns into something much more sinister than just resentment. Fueled by hatred, these socialists begin to justify almost any action taken against their opponents so long as it is committed in the name of sticking it to the rich.

Months ago, my colleague Dan Sanchez and I commented on this socialist phenomenon:

To these young revolutionaries, every frustration in their lives was someone else’s fault. If they weren’t getting the grades they felt they deserved, some bourgeois professor was to blame. If they didn’t have job prospects that matched their high regard for their own intellects, it must be the capitalist system holding them back. Their tendency was to scapegoat “class enemies,” not only for societal ills but for their own personal problems as well.

By shifting the blame to others, they relieved themselves of responsibility for their own problems. They wasted their time and energy complaining, wallowing in self-pity, and seeking redress, instead of taking ownership of their lives and fixing up their affairs. As a result, their frustrations only compounded.

When looking at this from the outside, it is easy for us to see the fault in this line of thinking. But the unfortunate reality of the situation is that many libertarians fall into this same negative feedback loop. Instead of casting blame on the rich, we make the state the scapegoat for all our problems. And often, it serves only to diminish our own wellbeing.

The government ruins people’s lives on a daily basis. Whether agents of the state are throwing human beings in cages because they choose to put a certain substance into their own bodies or ripping children away from their parents because of disagreements over medical care, there is no denying the atrocities committed on a routine basis. We have every right, then, to be angry with the state, especially since they are only able to perpetrate acts of violence against us due to our own tax dollars—tax dollars that are, of course, taken from us by threat of force.

When we choose to let anger brew and fester inside us, we do ourselves a great disservice.

But what are we to do with this anger? Do we let our hatred for the state poison us like the socialists do with their hatred of capitalism? Do we lose ourselves to bitterness and despair? Or do we take control of our own attitudes and strive to prosper in the face of adversity, no matter what the state might throw our way?

If Aleksandr Solzhenitsyn were still alive today, it is likely that he would implore us to take the latter route.

Solzhenitsyn knew the evils of the state all too well. In 1945, while serving in the Soviet military, he was arrested after a letter he wrote to his friend was intercepted by government officials. In the body of the letter, Solzhenitsyn had spoken critically of Joseph Stalin, an offense that ultimately got him thrown into a Soviet gulag.

For nearly a decade, Solzhenitsyn slaved away in a labor camp and eventually developed cancer. Trapped in a freezing Soviet prison, he had every reason to curse the heavens for his bad luck and lose himself in the despair of his situation. I would bet that if any one of us had found ourselves in a similar situation, we would begin to unreservedly blame the state for forcing us to bear such a burden, and we wouldn’t be wrong in doing so. But Solzhenitsyn refused to get caught up in the blame game. Instead, he chose a different path.

As hard as it may have been for him to maintain a positive outlook in the most dire of circumstances, he was inspired by the many people he was imprisoned with who refused to give in to despair and wallow in self-pity. Even though the state had committed this great act of violence against him, he knew there was no point in wasting his time blaming them. The deed had already been done; he could not reverse his circumstances. There were really only two choices: he could lose himself to blame or take control of his own attitude.

We cannot give this parasitic entity the satisfaction of keeping us oppressed.

Terrible things happen to people every day, and many of these offenses are committed by the hand of the government. But when we choose to let anger brew and fester inside us, we do ourselves a great disservice. Not only do we let ourselves be overcome with negativity, but we also miss out on channeling that energy into something productive. We strive to do everything in our power to succeed in spite of the state. We cannot give this parasitic entity the satisfaction of keeping us oppressed.

There, in Solzhenitsyn’s darkest of moments, he asked himself how he had contributed to his own suffering and what he could do to move past it. He strove to find the good in the midst of evil because he knew his own well being depended on it. Eventually, he was released from captivity and wrote his famous book, The Gulag Archipelago.

The book was one of the first of its kind in that it exposed the evils of communism and told the history of the horrific labor camps the Soviets threw their political enemies in. Rather than cursing the Soviets for the rest of his days, Solzhenitsyn did something productive with his experience, and he created something important. We would be wise to follow his example.

What if, instead of simply complaining, we criticized by creating something new?

Whether we like it or not, the state exists. And while we should constantly be striving to limit its influence and keep it out of our lives, we should not get lost in hatred. As Dr. Jordan Peterson says, “The desire for vengeance, however justified, also bars the way to other productive thoughts.”

I have been a part of many conversations that centered on insulting and blaming the state, and every single grievance was wholly justified. But what if, instead of simply complaining, we criticized by creating something new?

When Lysander Spooner felt that the US Post Office was both an unjust monopoly and a moral affront to the taxpayers who were forced to fund it, he didn’t just speak out against it—though, to be sure, he did that too. Instead, he started his own endeavor, the American Letter Mail Company. He criticized the government by creating something new. And this is something entrepreneurs do every day.

After the 2008 financial crisis demonstrated the terrifying levels of collusion taking place between governments and financial institutions, the person or persons known only as Satoshi Nakamoto created Bitcoin and blockchain, providing a way for individuals to bypass these powerful institutions in the future.

While unjust acts are commonplace, they do not have to define our existence.

Instead of just whining about how government regulations have caused health care costs to rise, for example, Dr. Devi Shetty found a way to bring heart surgery to people of all socioeconomic backgrounds by using economies of scale to dramatically lower costs. And instead of just whining about the government failing to fix the potholes in the road, Domino’s Pizza launched its own campaign and is now using its own funds to help repair the roads it uses to deliver pizzas. Instead of simply complaining that the government had allowed the cab cartels to obtain a monopoly over the taxi industry, Uber took matters into its own hands and launched an entirely new sector with ridesharing.

We do ourselves a great disservice when we dwell on hatred and negativity. And we also lose time that could have been better spent creating. While unjust acts are commonplace, they do not have to define our existence.

Don’t blame capitalism, the radical left, or the iniquity of your enemies. Don’t reorganize the state until you have ordered your own experience.

And, perhaps, after taking a moment to heed these words, we might find that the best way to retaliate against or abolish the state is to create alternatives that make its existence irrelevant.