Power is quite possibly the most corrosive influence in the affairs of humankind.

'Power, like a desolating pestilence,
Pollutes whate’er it touches; and obedience,
Bane of all genius, virtue, freedom, truth,
Makes slaves of men, and of the human frame
A mechanized automaton.'

The headline to a National Review article by David Harsanyi summed it up beautifully: “Schumer to Gorsuch and Kavanaugh: Nice Little Court Ya Got There; Hate to See Anything Happen to It.”

A proud, self-proclaimed “progressive” from a large state and the highest-ranking Democrat in the upper house of Congress, Schumer is a politician of considerable influence and responsibility. His threats drew cheers from his audience but widespread opprobrium from decent, thoughtful people everywhere.

Where does ugly intimidation fit into a civil society? Does it comport with a government built upon separation of powers, checks and balances, the rule of law and protection for individual rights and liberties? No it doesn’t, period. No ifs, ands, or buts about it.

Schumer’s menacing rhetoric is only a shade less graphic than “We want our way, so burn the Reichstag.” It betrays an end-justifies-the-means mentality. It illustrates an elitist ‘we’re better than you” attitude. It shows disdain for the concepts and institutions that keep the ancient beast of tyranny at bay. And, if I may read between the lines, it suggests that at its core, “progressivism” is all about one thing—and it’s not “compassion” or “the people” or “doing good.”

It’s all about raw power, something which Henry Kissinger once labeled “the ultimate aphrodisiac.”

Could you really trust someone who does evil in the name of doing good? Not me, not for a second. There’s a fundamental contradiction in that formula and it never ends well. It invariably reveals a fatal character flaw, made all the more sinister by the deception and concealment.

We would do well to remember, as economist Milton Friedman put it, that “The power to do good is also the power to do harm. Concentrated power is not rendered harmless by the good intentions of those who create it.”

Schumer may think it’s cute to throw his weight around in such cavalier fashion. When called on it, his first response was to compound the sin by lying about it. But this is deadly serious business, as the history of the decline of republics shows. Let’s take a look at this thing we call power, the lust for which was expressed in Schumer’s fulmination.

As I wrote in an article about the collapse of the ancient Roman Republic, power "is the most corrosive influence in the affairs of humankind. It’s a mental poison that twists and warps even the best of men and women if they allow it to take root in their souls."

As I explained then, power is an unhealthy desire to exercise control over others and “simply the pursuit of it, whether one ultimately attains it or not, is itself an intoxicant.”

Don’t just take my word for it. Here’s a selection of some of the most incisive remarks ever said or written about power, beginning with the famous passage from Lord Acton in 1887:

The face of power rarely gives itself away so blatantly as Senator Schumer’s ugly remarks. That’s another reason why it’s able to deceive. Most of the time, the power-besotted are smart enough to smile, to kiss babies, to promise you free stuff and otherwise suck you into their “loving” embrace. Take a look at the grandmotherly photos of Nexhmije Hoxha in her recent obituary in The New York Times.

Hoxha looks so sweet in that sweater, you might think. If you read the obituary itself, however, you’ll discover what a vicious, unrepentant tyrant she was. She’ll not be missed by anyone with even half a conscience. Power was her modus operandi and her raison d'être.​

Given what I’ve learned from history, politics, economics, and human nature, my advice to my fellow citizens regarding power is this: Don’t be smitten or dazzled by it; as public choice theory proves, those who exercise it put their pants on one leg at a time just like you. Be wary of it in the hands of anyone; it can take even the best of people and turn them into monsters. Recognize the inherent trade-off; the more that power is bestowed on others, the less liberty and choice you’ll retain for yourself.

We look forward to the time when the power of love will replace the love of power. Then will our world know the blessings of peace. 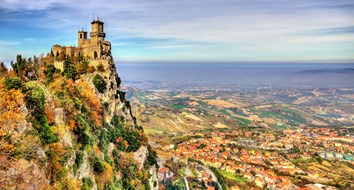