The costs of protectionism always outweigh the benefits. 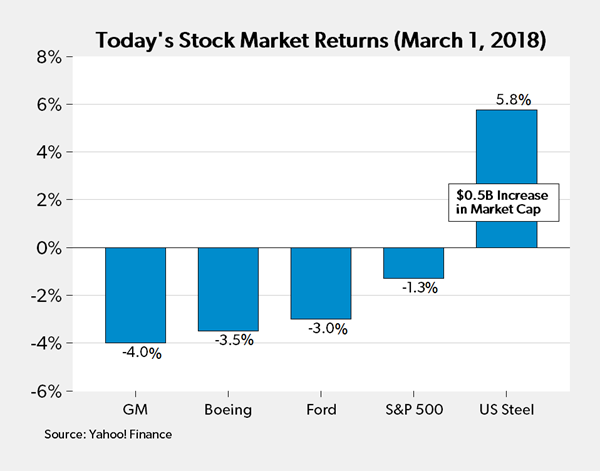 That’s a slight variation of the title of a Yahoo! Finance news report from last year with this opening:

In March 2002, President George W. Bush imposed a 30% tariff on Chinese steel. The results were chaotic. In a report put out by Consuming Industries Trade Action Coalition in February of that year, the coalition found the tariffs against China boosted the overall prices of steel and cost the U.S. 200,000 jobs in businesses that buy steel, representing $4 billion in lost wages.

The report referenced above is “The Unintended Consequences of U.S. Steel Import Tariffs: A Quantification of the Impact During 2002” from the Trade Partnership Worldwide LLC, here are some of the key conclusions:

The Consuming Industries Trade Action Coalition Foundation requested a formal examination of the impact of higher steel costs on American steel-consuming industries, and in particular, a quantification of employment losses at those companies. This study employed straight-forward and widely-accepted regression analysis using a variety of price and employment data to maximize the reliability of the results. We found that (bold added):

• 200,000 Americans lost their jobs to higher steel prices during 2002. These lost jobs represent approximately $4 billion ($5.5 billion in today’s dollars) in lost wages from February to November 2002.

• One out of four (50,000) of these job losses occurred in the metal manufacturing, machinery and equipment and transportation equipment and parts sectors.

• More American workers lost their jobs in 2002 to higher steel prices than the total number employed by the U.S. steel industry itself (187,500 Americans were employed by U.S. steel producers in December 2002).

• The analysis shows that American steel consumers have borne heavy costs from higher steel prices caused by shortages, tariffs and trade remedy duties, among other factors. Some customers of steel consumers have moved sourcing offshore as U.S. producers of steel-containing products became less reliable and more expensive. Other customers refused to accept higher prices from their suppliers and forced them to absorb the higher steel costs, which put many in a precarious (or worse) financial condition. The impact on steel-consuming industries has been significant.

Further, as I reported last year in a post on case studies of protectionism, the Peterson Institute for International Economics found that tariffs on specialty steel in the 1980s resulted in annual consumers losses of $1 million for every US steel job saved ($2.26 million in today’s dollars). Not. A. Good. Trade-Off.

The chart above displays a comparison of market returns today. The overall market, measured by the S&P 500, was down by 36 points and by 1.3% today; while the shares of steel-using companies like GM, Ford, and Boeing all fell more than twice that amount, or between 3-4%.

In contrast, US Steel shares soared by nearly 5.8%, which boosted the steelmaker’s market cap value by almost half a billion dollars. The costs of protectionism always outweigh the benefits, and the jobs lost always outweigh the jobs saved, and perhaps that net loss of economic value is also reflected in stock market values—the losses in market value suffered broadly by steel-using industries always outweigh the concentrated gains to the firms in the protected industry.

Editorial Note: Check out this video from FEE for more on tariffs