Predatory Boards and Workers without Rights

Would it be all right if, by force of law, a Presbyterian could lose his freedom of religion because a majority of his neighbors choose a different church — or if Catholics had to abandon the mass to live among Jews or Protestants?

What if a newspaper lost its freedom of the press because the owners of other papers disagreed with its editorial policies?

No one denies us the right to leave one church for another — or for no church at all. Our First Amendment rights are still mostly intact. We can even call on Uber or Lyft to help us escape the taxi cartels. But once a workplace is unionized, there is no escape. 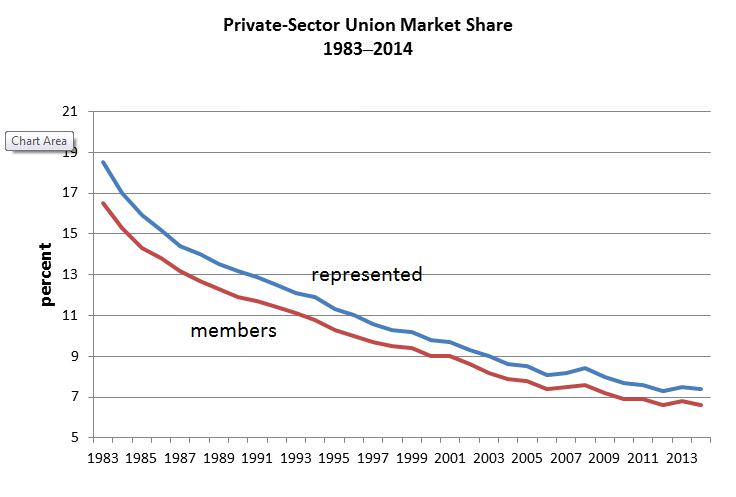 The above chart (based on www.unionstats.com) depicts the steady erosion of private-sector union market share from 1983 to 2014. The top line shows the percentage of workers represented by unions, and the bottom line shows the percentage of workers who were union members. Only 6.6 percent of private-sector workers were union members in 2014. This is less than it was in 1930, before the enactment of the NLRA.

According to a recent Rasmussen poll, the overwhelming majority (78 percent) of union-free workers want to stay that way. But they cannot make that choice as individuals. Every American workplace is subject to unionization by a majority vote of workers. Unions are finding it increasingly difficult to obtain majority votes, but the law encourages unions never to take no for an answer, and the NLRB is trying to make it even easier for unions to impose elections and win majority votes.

For example, in December 2014, the NLRB adopted new rules to reduce the time that employers have to argue against unionization. In the same month, the board weakened the protections that private-sector higher education faculty have enjoyed against compulsory unionism. The case involved Pacific Lutheran University, whose faculty previously enjoyed protections on the basis of the university’s religious affiliation as well as the faculty’s status as “managers” under the Supreme Court’s 1980 Yeshiva decision.

To force individual workers to submit to a majority vote on the private question of union representation violates their freedom of association.

But under the NLRA, once a majority of workers at an enterprise votes in favor of a union, both replacement employees and employees hired to perform altogether new jobs are stuck with the union forever. There are no regularly scheduled reelections. For example, none of the current members of the United Auto Workers (UAW) employed in Detroit has ever voted in favor of union representation. They are locked into the UAW because of votes taken by others in the 1930s and '40s.

Union organizers and their political cronies assert that unions emerge out of the struggle of workers who desperately want and seek out union representation. In other words, unionists assert, workers organize to bargain. The reverse is actually the case: unions bargain to organize.

When unions capture dues payers by their bargaining with third parties, they then “represent” their captives.

There are many good reasons for workers to prefer to be free of any union. For example, union-free enterprises offer more job security than their union-impaired counterparts because the latter are too sclerotic to adapt  to frequently changing global market conditions. Firms that cannot adapt naturally lose market share and shed workers. As a result, private-sector unions rarely are able to raise worker compensation above that received by nonunion workers. They can do so only in enterprises that are protected against competition by their political cronies. Otherwise, union workers pay union dues and get nothing in return except strife.

There is strong evidence that union-impaired firms find it harder to attract investors than union-free firms do. Unless severely unionized firms — General Motors, for example — receive "investments" from taxpayers through politician-imposed bailouts, they shrink or perish. They do not grow.

Under union rules, pay is based largely on job classifications and seniority. While union-free workers are free to excel on the basis of performance, union-impaired workers are chained to a contract. A union-contract wage is both a ceiling and a floor. In a union-free environment, the only ceiling on a worker's wage is his or her productivity.

Unions promote adversarial relationships between workers and employers, while union-free employers are free to enlist workers as partners in building durable and growing value.

The only way effectively to ban the predatory antics of the NLRB is to abolish the two cornerstones of the NLRA: exclusive representation and mandatory good-faith bargaining. In a free society, unions would represent only their voluntary members, and unions would only be able to negotiate with employers who consent to bargain with them. Many comprehend the illegitimacy of involuntary representation, but they find it difficult to understand the illegitimacy of involuntary bargaining. Why, they ask, would any employer bargain with any union unless forced to do so?

Some workers do find union representation to be valuable, but that is no reason to force all other workers to accept such representation. Much less does it justify making it illegal for employers to choose not to bargain with unions. Workers, employers, and unions should all be free to choose.

The market’s discovery procedure created Uber as part of the solution to government-imposed taxi monopolies. But the coercion imposed by the NLRA is much more severe than that imposed by taxi monopolies. In most locations, riders are still free to switch from taxis to Uber, but nowhere are individual workers free to switch from existing unions to union-free forms of representation, even self-representation.

Even union-free enterprises cannot protect workers against unions. Under current law, every workplace is subject to union capture through forced representation elections. Only the restoration of individual free choice — for labor as well as management — can set workers free.