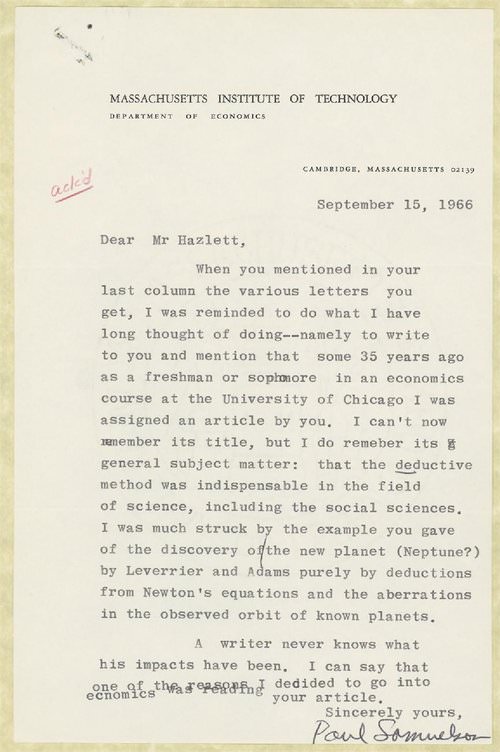 Henry Hazlitt’s influence is easily seen in Austrian and other free-market circles. Reminiscent of the saying “It usually begins with Ayn Rand,” Hazlitt’s Economics in One Lesson is usually one of the first economics books free-market economists pick up and truly absorb. But Hazlitt’s influence is even greater than this. His newspaper columns for the New York Times and Newsweek brought sound economic logic to many of the day’s issues in his lengthy career as a journalist.

Even more impressive, though, is his influence on the economic profession. As Peter Boettke notes in a new working paper he will present at this year’s History of Political Economy conference, “The Economist as Public Intellectual,” Hazlitt’s work was read and taken seriously by the economics profession through most of his career. Even as a journalist he was able to get his many books on economics reviewed in distinguished journals such as the American Economic Review, Journal of Political Economy, and Ethics. And while they may not have always agreed with him, reviewers treated his ideas in a serious and respectful way.

Hazlitt’s articles also found their way into college classrooms. One interesting example comes from a September 15, 1966, letter to Hazlitt from economist Paul Samuelson (hat tip: Peter Boettke and Liya Palagashvili). In the letter Samuelson notes that an article by Hazlitt (he forgets exactly which one) was assigned in his early undergraduate studies at the University of Chicago and that article convinced him to go into economics. Samuelson of course went on to become one of the most influential Keynesian economists, which makes this a surprising origin indeed. And as a prominent critic of Keynesian ideas, Hazlitt must have wondered exactly where Samuelson went wrong.