The Census Bureau recently released its annual report on “Characteristics of New Housing,” with more than 700 pages of detailed data on the characteristics of new single-family houses and multifamily buildings in 2015. 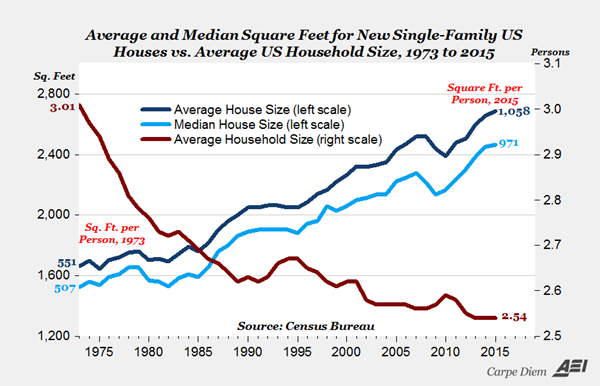 In percentage terms, that’s a 92% increase for both the median or average house size per person. Amazingly, the average amount of living space per person in a new house has nearly doubled in just the last 42 years!

What about the cost of new houses over the last 42 years? On a per square foot basis using median house sales prices and median square footage, the inflation-adjusted price per square foot for new houses (in 2015 dollars) has been relatively stable since 1973 in a range between about $107 and $128 per square foot at an average of about $116. 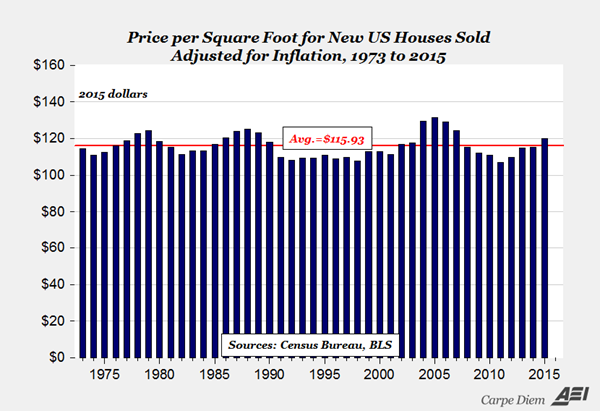 We hear all the time about stagnating wages and household incomes, the decline/demise/disappearance of the middle class, rising income inequality, and lots of other narratives of gloom and doom for the average American.

And today’s new houses, compared to those built in the past, are much more energy-efficient; they come with better, bigger and more bathrooms, closets, fireplaces, and garages; they’re equipped with better and more home appliances; and they almost all include modern features like central air conditioning today (93% in 2015) that were expensive luxury options in previous decades like the 1970s (fewer than half the houses built in each year between 1973 and 1976 had air conditioning).

Americans are paying about 70% more today for a median-priced new house on an inflation-adjusted basis compared to a 1973 house, largely because the size of the median house today is larger by 62% (almost 1,000 square feet). So on an inflation-adjusted basis, Americans are actually paying only slightly more today for a new house on a per square-foot basis ($120) than in 1973 ($114.42), for homes that are of higher quality and more energy-efficient with more features like air conditioning, fireplaces and multiple garages.

Overall, the increasing amount of living space (especially when adjusted for declining household size), the improvements in housing quality, the increased number of features, and relative affordability of new houses today means that living standards continue to gradually, but consistently, improve year after year for millions of Americans.

This article reprinted with the permission of the American Enterprise Institute.