Modern Monetary Theory Is Not Grounded in Economic Reality

MMT proponents are ignoring real risks to the American economy.

Proponents of Modern Monetary Theory (MMT) argue that there are no real limits to increased US public spending. They presuppose that the US government will always be able to finance itself at low interest rates and grow its way out of any debt problem.

This blinds them to the very real risk that by being fiscally irresponsible, the US would in time get itself into economic trouble as so many budgetary undisciplined countries have done before it.

Surprisingly, the MMT proponents overlook two factors that make it highly improbable that US interest rates would stay low indefinitely if the government were indeed to increase public spending with abandon. This blinds them to the very real risk that by being fiscally irresponsible, the US would in time get itself into economic trouble as so many budgetary undisciplined countries have done before it.

The first point they overlook is that the US is already at full employment as indicated by the fact that US unemployment is currently at its lowest rate in the past 50 years. In those circumstances, engaging in fiscal pump priming at this late stage of the economic cycle would risk rekindling inflation by creating a situation of excess aggregate demand. Presumably, markets would anticipate the inflation risk and soon begin demanding from the government higher interest rates to protect them from that risk.

The second overlooked point is that the US is already the world’s largest creditor country and would become an even larger creditor country if it were to increase the size of its budget deficit. According to the IMF, the US currently has a negative net international investment position of around $9 trillion, or more than 40 percent of GDP. The IMF further estimates that on present policies, the US net debtor position would rise to more than $12 trillion, or around 50 percent of GDP, by 2023. 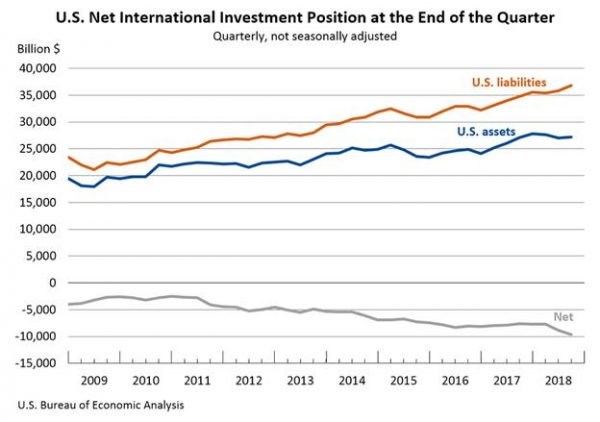 The United States during the Reagan years was no stranger to the twin deficit problem of a high budget deficit leading to a high external trade deficit. There is the real risk that further increasing the budget deficit would exacerbate the twin deficit problem from which the United States already suffers. It would do so mainly by reducing the level of US savings and worsening the US savings-investment imbalance. If that were to occur on a sustained basis, it would be fanciful to think that foreign investors would lend indefinitely to the United States at a low interest rate. That would especially be the case if higher US external trade deficits were also to force the US dollar lower.

Hopefully, Modern Monetary Theory is but another passing fad with little policy relevance. If not, we should fear for our children, who will have to pick up the pieces of yet another misguided economic policy experiment.