Mises's 'Planned Chaos' is a Masterful Critique of Statism

Chaos is the inevitable result of a planned economy. 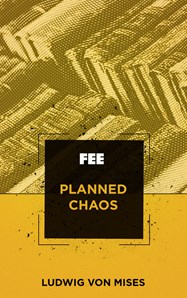 In 1947, Leonard Read of FEE asked Ludwig von Mises to cumulate all his knowledge (gained from experience) of 20th-century political history into a single essay, one that dealt with all forms of state planning. The result was the single most sophisticated book on politics that Mises had written until that time of his life. It still holds up as a masterpiece, a piece you can read multiple times and still gain insight.

Appearing two years before Human Action, Mises broadened his early critique of socialism to include fascism and Nazism and the conditions that led to their rise. It is in this work that he isolates statism in general, and dictatorship in particular, as the ultimate enemies of freedom, regardless of whether that statism is from the left or the right.

Planned Chaos, then, is a statement for the ages, a mature and passionate work that grew from enormous learning and personal experience. FEE is pleased to make this classic volume available as a free ebook. I strongly recommend that you download it now.

Production can either be directed by the prices fixed on the market by the buying and by the abstention from buying on the part of the public. Or it can be directed by the government’s central board of production management. There is no third solution available. There is no third social system feasible which would be neither market economy nor socialism. Government control of only a part of prices must result in a state of affairs which—without any exception—everybody considers as absurd and contrary to purpose. Its inevitable result is chaos and social unrest. ~ Ludwig von Mises