Marijuana Should Be Legal Even If We Don't Like It

Unjust laws should be repealed, not just ignored.

Here are two statements that seem in conflict.

There’s actually no conflict because we can decide that some things are distasteful without wanting to infringe on the freedom of others to partake. And you can make that decision for moral or utilitarian reasons.

I’m tempted to agree with both sentences. The rule of law is vital, after all, and I definitely don’t like when Sessions uses the Justice Department to hassle people for victimless crimes.

Charles C. W. Cooke of National Review hits the nail on the head. 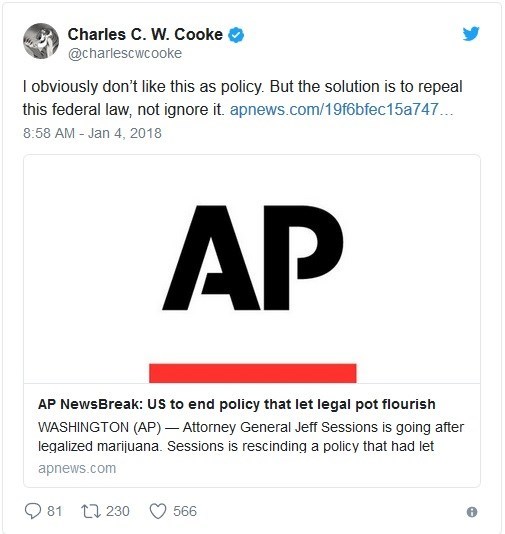 There’s no question that the right approach is for the federal government to eliminate drug laws. Heck, even people who support the War on Drugs should favor this approach since criminal justice (other than a few select areas such as treason) should be a matter of state and local governments.

A broader point is that we simply have too many laws. Harvey Silverglate estimates that the average person unknowingly commits three felonies per day.

This means that government officials could probably indict, convict, and imprison almost all of us. Needless to say, that’s not how a free and just society should work.

Our Byzantine tax code is an example. Many of us probably unintentionally violate the law because of needless complexity. And even if we haven’t violated the law, I’m guessing a prosecutor could convince a grand jury that we should be indicted. And who knows what would happen after that.

So while I mostly argue for tax reform because I want more growth, I also think that there’s a moral argument for a simple and fair system.

There are many other laws that shouldn’t exist at all. I obviously put drug laws on that list, but I’d also add anti-money laundering laws and civil asset forfeiture laws.

All that being said, I obviously don’t want the Justice Department in Washington to waste law enforcement resources in a campaign to undermine states that have decriminalized pot. But there’s a right way and a wrong way to solve this problem.

P.S. You can click here for other libertarian quandaries.